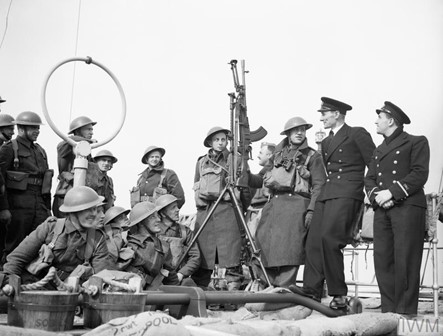 While traditional historiography naturally explores the military dimension – Norway’s unique tri-service nature, challenging operational environment and the immediate causes of British defeat – the campaign also offers other opportunities for historical analysis. The first engagement between British and German land forces since 1918, this Scandinavian struggle also raises questions about press representation of conflict and its impact on public perception and morale. Utilising Mass Observation (MO) and its reports as an indicator of public sentiment, it is evident that the Norway campaign’s portrayal fuelled a soaring distrust of British news outlets, who had met the public with wildly erroneous and optimistic coverage throughout.

The influence of inaccurate reporting revealed itself in just the first few days of the conflict’s opening, as highlighted in an MO file report dated 15 April 1940. Collecting verbal opinions of nearly 1,000 people of ‘all ages, sexes and classes’, the report produced sufficient statistics to point to ‘definite important tendencies’ in Briton’s reactions. As recorded on 9 April, 45% of responses towards the German invasion of Norway were categorised as ‘bad’, 31% as ‘good’, and 24% (simply owing to the lack of news) as ‘don’t know’. Just two days following the invasion, however, public perception took a decisive swing towards the positive. While ‘good’ comments had previously equated to 31%, this figure skyrocketed to 62%, owing to news of naval victories at Narvik, but also ‘the influence of exaggerated Newspaper Reports, and B.B.C. Broadcasts’, as the investigation concluded.

Here, several key stories undoubtedly altered public attitudes. Firstly, there was the wrongly reported capture of Trondheim and Bergen by British forces. As the Aberdeen Journal reported on 11 April, ‘British forces yesterday captured the Norwegian ports of Bergen and Trondheim. This is confirmed by the Swedish General Staff’. Published by The Times on the same day, ‘a report from Stockholm last night stated that British forces had taken Bergen and that the Norwegians had recaptured Trondheim’. The variation between these two stories in itself emphasizes the tenuous nature of the reports. Secondly, there were overstated British naval victories against the German navy in the Skagerrak and Kattegat Straits, and lastly, there were ambiguous reports of events in the Narvik area. Following the naval battles in the Narvik Bay, The Times, ‘confirming reports’ of the Bodø correspondent of the Norwegian News Agency claimed triumphantly that ‘the British are now definitely in control of Narvik’. The ambiguity of whether this implies naval or land control naturally fostering false confidence in the British public.

By 12 April, the growing awareness of contradictory journalism clearly confused public thought and confidence. The immediate impact was deflation amongst the British public, catalysing the first traces of distrust in press representation of the campaign. While 62% of expressed opinions on 11 April had been labelled as ‘good’, this figure fell dramatically to 37%. Drawing on entries by some of MO’s diarists, one can clearly see the bafflement caused by this early misreporting. One diarist wrote, ‘Mr. Churchill says we have not captured any of the Norwegian ports. So one does not know what to believe’. Another simply noted ‘it was a pity, as disappointment after exhilaration is chilling’. The damaging effect of this opening episode, as Lord Perth wrote in a letter to Lord Hood, was that ‘public opinion was beginning to be serious, and people were asking what was being concealed’. Perth concluded that ‘there would be a serious explosion before long if the present policy were to continue’. The explosion, that would indeed follow, would be triggered by the evacuation of British forces from central Norway.

The evacuation of Sickleforce and Mauriceforce from the Åndalsnes and Namsos areas in early May fully exposed the inaccurate, sensationalist and over-optimistic reporting by the British press. Until this juncture, the public held a wary expectation of success in Norway owing to the overwhelmingly positive reports covering ongoing operations. Maintaining this perception, on 29 April, just days before evacuation, newspapers published an interview with Lieutenant-General Carton de Wiart, proclaiming that ‘we must not be impatient if there is little action in this early stage of the campaign … big things are likely to happen’. Even as late as 1 May, while the evacuations were underway, the headline of the Daily Express proclaimed, ‘British Halt Nazi Advance at Dombås: Heavy Enemy Losses at Steinkjer’. When news eventually broke of the Allied withdrawal this made the British public’s sense of bewilderment and shock all the greater.

The impact of the unexpected departure is revealed in MO’s second file report on the campaign, of 3 May 1940. When asked what they thought about Norway on 1 May, 37% of participants without prompt included ‘antagonistic attitudes about the press, or the way the Norwegian campaign had been presented’ – this dwarfing the percentage of ‘under 1’ judged between 9 and 10 April. Moreover, while 37% of MO’s sample were considered ‘optimistic’ of British victory following the German invasion, just 8% explicated such feelings at this juncture. Thus 92% of contributors were either critical, ambivalent or simply confused about Britain’s military position in Norway. ‘The press’, as deftly summarised by MO, ‘has shown its hand’ during the evacuations of early May, and the ‘public are bewildered and dismayed at what appears a sudden and unexpected reversal, and antagonism turned against the Press as scapegoat’.

This debacle ushered an even more explosive chapter in the British political sphere, the so-called ‘Norway Debate’ of 7–9 May in the House of Commons. Envisaged at first to be merely a critical examination of the setback in Norway, as the Western Times neatly concluded, the episode developed into a ‘wholesale indictment of the Government’s policy, general conduct of the war, and even of the capabilities of prominent Ministers’. Criticized by the opposition, Prime Minister Chamberlain also received scathing attacks by respected members of his own party, notably by Admiral Sir Roger Keyes and Leo Amery. Particularly damaging, Amery’s 45-minute speech mentioned the prime minister no fewer than 15 times, and other ministers not once. Condemning the government’s action ‘through the whole of this lamentable affair’, Amery concluded by quoting Oliver Cromwell, ‘you have sat too long here for any good you have been doing. Depart, I say, and let us have done with you. In the name of God, go’. (These same damning words recently echoed by MP and former cabinet Minister David Davis towards Prime Minister Boris Johnson.) The debate enabled the Labour Party to force through a division on 8 May, leading to a fall in the majority held by the Conservatives in the House. Although the government recorded 281 votes against 200 of the opposition, the disillusionment in Chamberlain’s political and war leadership illuminated by the fact that 44 government supporters had voted against him, with 60 more abstaining.

Having completely dominated public interest during the week, the parliamentary debate stimulated a dramatic decline in public confidence in Neville Chamberlain, as captured in MO’s new file report, entitled ‘Political Crisis Report’. The survey (of the 177 upper- and middle-class participants) suggested that just 9% held either ‘favourable’ or ‘very favourable’ opinions of the prime minister. The distinct opposite, ‘critical’ or ‘very critical’ formed the two largest groups at 27% and 35%, respectively. Among the 433 working class contributors, ‘favourable’ and ‘very favourable’ similarly held just 9% of the opinions expressed while 44% of opinions were classified as either ‘critical’ or ‘very critical’. The deterioration in opinion, as the report concludes, was due partly to: ‘external events in Norway … partly to the country’s own leadership, which inspired over-confidence … partly owing to the lack of control over the press and B.B.C. relaying of tenuous news’, and ‘partly due to the premier’s own underestimate of public opinion’. The ultimate outcome of this politically and militarily explosive period being the resignation of Neville Chamberlain and the rise of Winston Churchill, the same day as the German invasion of Western Europe.

Overshadowed by the British Expeditionary Force’s evacuation from Dunkirk and the eventual fall of France, the campaign in Norway slipped into the shadows of British awareness, where it ultimately remains to this day. Although this episode in Britain’s history may not hold significance for the modern public, Britain’s involvement in that theatre broke the artificial calm of the Phoney War. Operationally unique, the campaign in Norway also offers other intriguing points of historical analysis. Britain’s Scandinavian struggle provides the historian with an opportunity to study the press representation of conflict, and its impact on public perception and morale through the lens of Mass Observation. Elevated by sensationalist reports of British successes, the first cracks of public discontent with reporting appeared as early as 12 April, igniting what would prove to be a spiralling doubt of the media and how active operations were censored by the Ministry of Information. By early May, the Allied withdrawal from Åndalsnes and Namsos ripped wide open the British press’ erroneous coverage of operations. The evacuation from central Norway also sparked one of the most politically volatile episodes of the war. The ‘Norway Debate’, and the conduct of the Norwegian affair fuelled by 10 May the resignation of Neville Chamberlain, and the appointment of Winston Churchill as Prime Minister. By no means insignificant, the campaign in Norway brought to the helm of power the very prime minister who would see the fall of the Third Reich in May 1945. Although well covered in operational histories, the Norway campaign still holds potential for future academic appreciation, particularly in the cultural realm where one might directly examine the evident lack of British memory of the campaign. Already maintaining a low profile in the British memory of the Second World War, let us ensure that the campaign, and those who fought in it, are never forgotten.

Charles Taylor graduated with an MA in Modern History from the University of Kent in 2021. This blog is based on his prize-winning MA dissertation, supervised by Timothy Bowman.