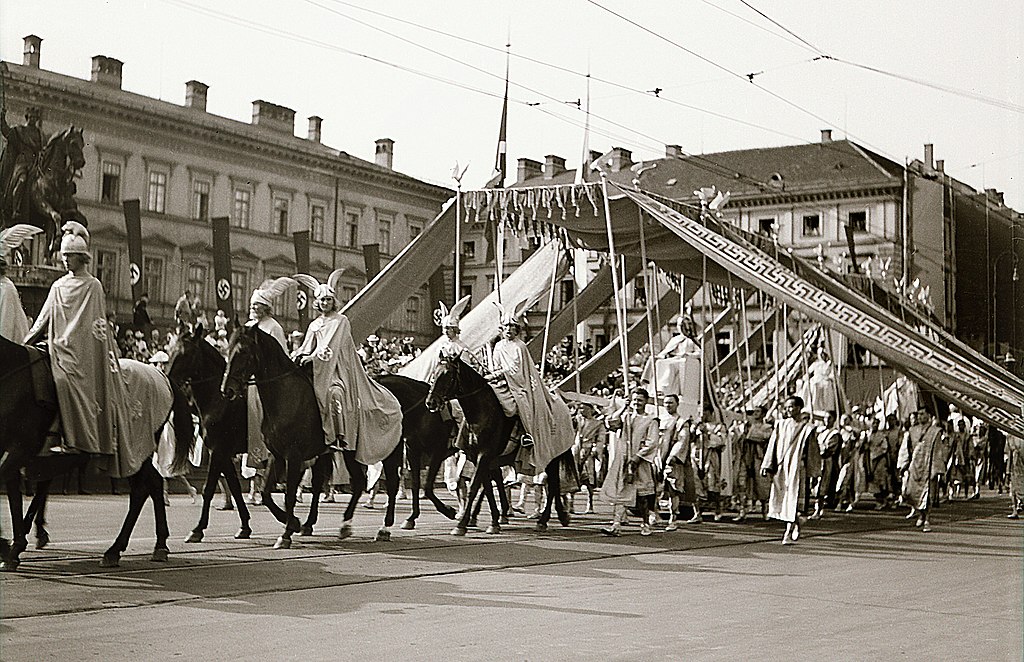 Nazi culture was so appealing to many Germans because, according to Föllmer, it merged ‘specifically Nazi components’ (p. 271) such as völkisch ideals and ‘dictatorial interventions’ (p. 59) with popular entertainment and bourgeois and nationalist traditions, enticing ‘educated’ Germans by drawing on pre-existing middle-class ideals but portraying them in novel ways. The presence of nationalistic middle-class values in Nazi culture was a continuity from the Weimar period, where a bourgeois culture thrived in spite of the cosmopolitan nature of the regime. While culture carried particular characteristics during the Third Reich, it was also vague, which helped to amass support for the Nazi movement, since the ‘desires and dreams’ of Germans could be drawn upon (p. 54). In other words, individuals could enjoy the elements of National Socialist culture which most resonated with them.

Nor did culture carry precisely the same ideals during the Third Reich. While it consistently remained nationalistic and anti-Semitic, and stressed its superiority, by the mid-1930s, the bourgeois and nationalistic elements of Nazi culture – while still present – had waned, and culture increasingly articulated inner ‘purity’ and outward ‘strength’ (p. 113). Anti-Semitism had also radicalised in the years before the outbreak of war, and this was ever more evident in National Socialist film and imagery. By the late 1930s, Jews were completely excluded from the ‘majority’ culture and discriminated against in cultural formats, such as in the film The Eternal Jew, which was produced in 1940. This anti-Semitism, alongside the increasingly imperialist nature of culture from the start of the conflict, is what made Nazi culture unique. Indeed, imperial aims underscored the cultural treaties made with Hungary, Spain and Japan, which promoted the translation and sharing of ‘politically approved’ works. Tours of völkisch writers went to the Netherlands, Scandinavia, and the Balkans. The outbreak of war also entailed a shift from an emphasis on propaganda to more popular culture formats. But at the end of the conflict, the ‘cultural synthesis’ of National Socialism, according to Föllmer, had disintegrated; theatre buildings were not only physically destroyed, but the military demise of the Third Reich meant that few Germans were swayed by a ‘revival of the rhetoric of decision and renewal familiar from 1933 or 1934’ (p. 265).

Yet Föllmer makes clear that large swathes of the population still espoused Nazi ideology up until the end of the Third Reich, although it intermingled, as it had throughout the regime, with bourgeois ideals and consumerist fashions. Föllmer notes that National Socialist viewpoints had been ‘absorbed by the Germans’, and, indeed, a key strength of the book is Föllmer’s argument that Nazi culture was not simply propaganda imposed from above on ‘the people’ in order to control them, as Michael Kater argued in his book, Culture in Nazi Germany, but was rather something enjoyed and indeed produced by many Germans. Rather than regurgitate old totalitarian models, Föllmer thus produces a more nuanced and novel analysis of culture in the Third Reich than Kater. Föllmer weaves together a tapestry of individual stories to demonstrate that Nazi culture was widely supported; we hear the tales of Elisabeth Gebensleben-von Alten, a supporter of Nazi culture, throughout the book. The incorporation of vividly described personal experiences into the book, without losing sight of the overarching argument, makes Föllmer’s book stand out amongst the existing literature.

Exactly what happened to Nazi culture in the post-war years is briefly touched upon; Föllmer notes that after 1945, it was possible to differentiate between ‘German’ and ‘National Socialist’ culture, but this topic is not explored in extensive detail. Furthermore, one wonders whether ‘Nazi culture’ really did vanish in the way Föllmer implies; this argument carries hints of the old Stunde Null (zero hour) approach – that a complete break with the past took place in Germany when the war ended at midnight on 8 May 1945. National Socialist sympathies undoubtedly remained in the years following the war. Surely this affected culture across East and West Germany in the post-war period? Yet the aim of the book – to provide a reader with an insight into how Nazi culture aided the rise of the movement – is without doubt achieved. Culture in the Third Reich enriches not only the minds of scholars and undergraduates, but is well-suited for a general interested audience, due to its lively, accessible tone. It is undoubtedly the authority on culture during the Nazi regime.

Dr Kate Docking is a Research Fellow in the Department of History at the University of Hamburg. She is currently working on the project Taming the European Leviathan: The Legacy of Post–War Medicine and the Common Good, which is funded by the European Research Council. Kate’s research interests centre around the history of gender, medicine and everyday life.