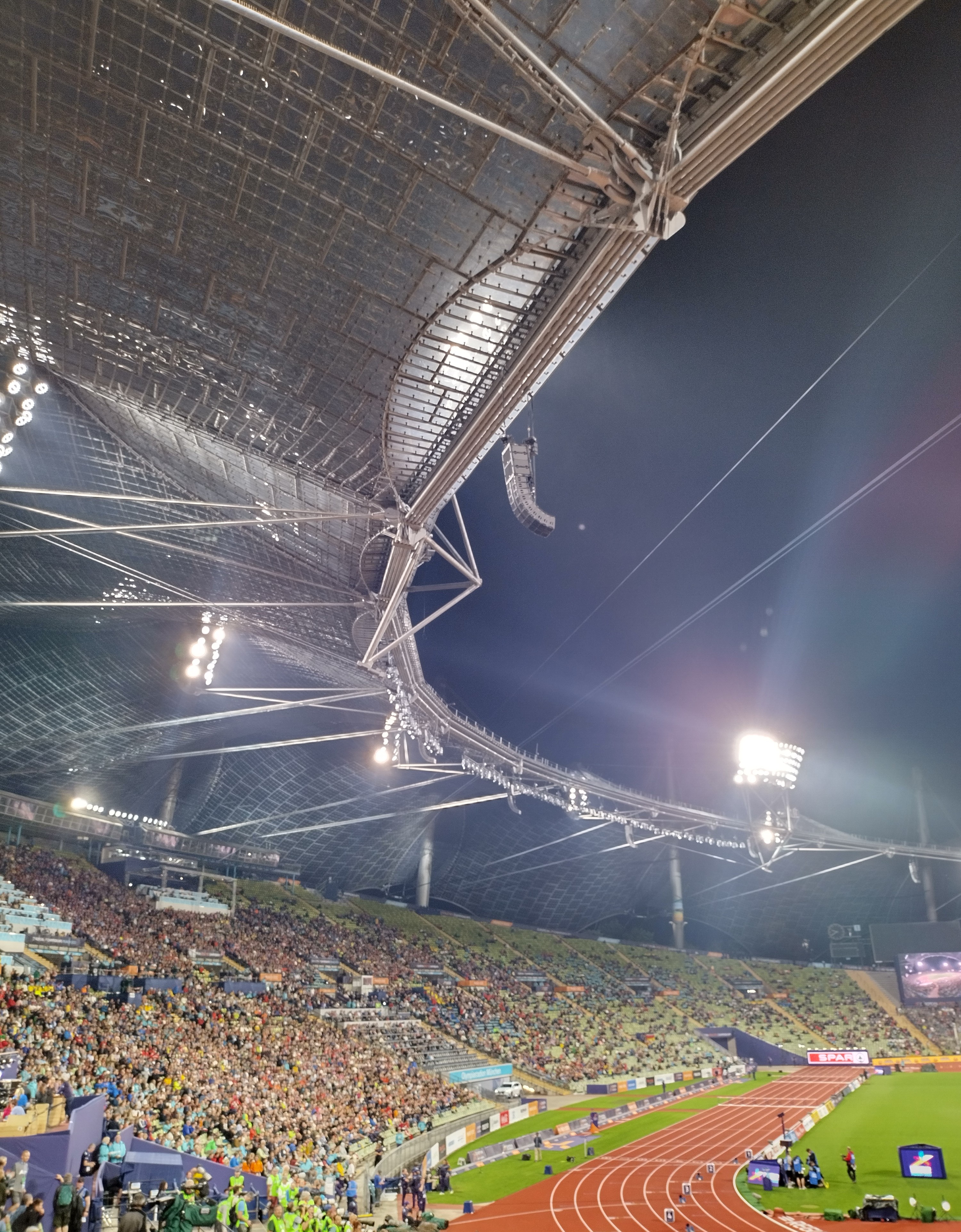 From 11 to 21 August 2022, the multi-sport European Championships took place at Munich’s Olympic Park. Whilst this event occurs every four years, there is a particular historical resonance for this year’s championships for Munich, and Germany, as it coincides with the 50th anniversary of the 1972 Olympic Games held in Munich. Unfortunately, these Olympic Games will always be tainted by the terrorist attack carried out by the Palestinian group ‘Black September’ on the Israeli athletes in the Olympic village on 5 September 1972. However, the Munich games are also remembered and celebrated for how a new, democratic Germany was presented to the world only twenty-seven years after the end of the Second World War. Effectively utilised as a means of propaganda, the symbolic design of Munich’s Olympic stadium spatially exemplified this message and subsequently became a piece of iconic architecture. This is clearly illustrated by the slogan of this year’s European Championships, ‘Back to the Roofs’.

From its early stages of planning, Munich’s 1972 Olympic Games were recognised as a propaganda opportunity. The 1972 organising committee was ‘an unusual and unique grouping’ of the Federal Republic, the Free State of Bavaria, the State Capital Munich and individual representatives of the world of sport. However, the idea of Munich to host the 1972 Olympic Games was conceived by two individuals leading this committee: Willi Daume, the head of Western German sport, and Hans-Jochen Vogel, the mayor of Munich. Commenting on the application for the games, Vogel recalled that since ‘we had to consider the continuing effects of the memory of the Nazi era and Hitler’s misuse of the 1936 Olympic Games . . . we kept our advertisements emphatically sober and inclined towards understatement’. This ultimately inspired the organisers’ motive of characterising the Munich Olympics as the ‘cheerful games’. In addition, it should be noted that the Cold War propaganda battle with the (East) German Democratic Republic (GDR) was also influential in shaping this desire as the (West) German Federal Republic looked to present itself in a positive light.

Architecture was considered particularly significant towards achieving the ‘cheerful games’, as highlighted by Willi Daume’s declaration: ‘our integrity, the spiritual integration of a new, young Germany will be measured according to the level of . . . the architecture [of the games]’. The design of Munich’s Olympic stadium would have to make a clear distinction from the precedent of Berlin’s 1936 Olympic stadium. Designed by Otto March, Berlin’s Olympic stadium is defined by a monumental neoclassicist style, consisting of a large colonnade surrounding the structure, topped with wide, massive cornices. This style was used for much of the Nazis’ symbolic architectural projects known as the ’Führer Bau’. Moreover, to diminish the possibility for comparison, Munich’s organising committee subsequently demanded entries into their architecture competition to follow the architectural concept of a ‘compact games’ by ‘avoiding any pretension to monumentality’. Indeed, such intentions were explicit in the prize-winning design of Behnisch and Partner’s (B&P) from Stuttgart, led by architect, Günter Behnisch.

The most symbolic component of B&P’s plans for the stadium and the Olympic complex was the stadium’s roof. To discourage monumentality, it was believed that the facilities in the Olympic Park should be connected by a shared component. Whilst B&P designers, Auer and Wehrse, were discussing designs for this shared architectural component, a newspaper photograph of Frei Otto’s pavilion for the 1967 Montreal Exposition caught their eye. The pavilion’s most prominent feature was its elegant space forming tent roof, consisting of steel mesh covered in a translucent plastic layer, held up by steel masts and cables. The pair proceeded to envision the use of such a roof for the Olympic complex by famously borrowing a pair of nylon stockings from Auer’s wife to stretch over tiny sticks for their model.  Appealing to the concept of a ‘compact games’, the B&P designers were most intrigued by the roof’s technology having the capacity to adapt to abnormal topography of any site and was thus incorporated as part of the winning design.

Furthermore, it was soon recognised that using the sweeping roof as the shared component of the main venues would also effectively embody the lightness and ethos of the games. Even as early as 1967, once the roof materialised as part of B&P’s winning design, chief designer of the games, Otl Aicher, observed that the roof ‘gave the impression of being playfully improvised’, encouraging the games’ harmonious message. Furthermore, to adapt Otto’s roof to such a large scale, transparent Plexiglas tiles would have to be used. This encouraged further propagation of the roof as it conveyed important messages about the Federal Republic, symbolising its open and transparent democracy. Combining steel, concrete, and chemistry to portray a ‘playful’ temperament, Vogel commended Behnisch’s transparent roof for successfully giving Munich ‘architectural expression to our own time, to all its tensions, aspirations, and sensibilities’. Similarly, in July 1972, the Sydney Sun Herald affirmed this notion, praising the stadium’s technically innovative roof as the architectural embodiment of the new, modern Germany. Thus, the roof’s characteristics and design made it effectively function as architectural propaganda. This led Behnisch to proclaim the roof as the ‘architectural symbol of the Munich games’.

However, the rising expenditure on the roof’s construction increasingly undermined the symbolism of it. Mainly caused by the roof’s technology, the construction expense of the whole Olympic complex was eventually recalculated at 400 to 500 per cent above the initial figure. Once construction was completed, the cost for the Olympic complex totalled DM 1.35 billion. German newsmagazine Der Spiegel started to point blame towards the organisers of the games, claiming that ‘due to the inner ambiguity of the makers themselves’, the ‘spiritually renewed games will not exist’. The roof soon also became a symbol of Germany’s apparent preference for monumentality and gigantism as Der Spiegel further commented that the ‘planning aimed at architectural monuments’ and ‘built too big under political pressure’.

Nevertheless, the controversy surrounding the rising expenditure should be considered more as a reflection of the tensions that characterised Vergangenheitsbewältigung (to come to terms with the past) in Germany’s postwar era. In his book, Postwar, Tony Judt highlights that whilst Vergangenheitsbewältigung encouraged a willingness to overcome the Nazi past, it also encouraged an awareness to maintain its cautionary value. Consequently, if any ‘self-confident behaviour’ to overcome and somewhat forget the Nazi past significantly outweighed the cautionary ‘attitude of abstinence’, criticism would likely follow. This is explicitly shown with the controversy surrounding the stadium’s roof. As B&P ambitiously sought symbolism, expenditure unexpectedly increased, and the roof ultimately became controversially associated with German national prestige and monumentalism that was so characteristic of the Third Reich.

Moreover, by acknowledging the roof as an example of West Germany’s ‘self-confident behaviour’, the controversy surrounding the roof further highlights the organisers’ considerable effort to make the roof function as propaganda. It was exactly this drive towards architectural symbolism that ultimately saw the stadium and its roof secure the fondness of the people of Munich and Germany. Even fifty years after Munich’s Olympic Games, B&P’s stadium and roof still stands as an exceptional architectural symbol of Germany’s continued post-war vow towards a harmonious democracy. Hence the 2022 European Championships’ slogan ‘Back to the Roofs’. Commenting on the use of the slogan, the event’s website claims that it ‘is more than a call to return to the Olympic Park, it is a promise to take up the legacy of the 1972 Olympic Games’. Thus, effectively functioning as spatial propaganda, the roof of Munich’s Olympic stadium was designed with the intention of expressing an idea which it still continues to communicate today.

Peter Banks is a PhD student at the University of Hamburg, researching the spatial propaganda of the German Democratic Republic’s (GDR) poliomyelitis vaccination campaign. He is especially interested in the development of health knowledge in the GDR and the spaces of engagement between the state and its citizens that were fundamental in this process.

Published in Diplomacy and Germany