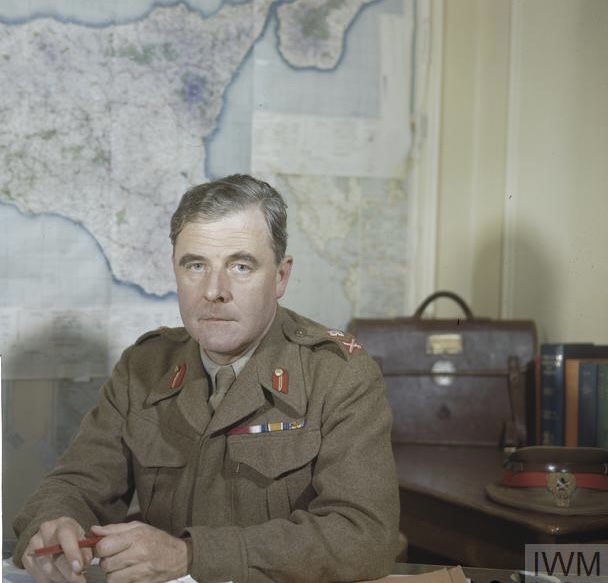 More years ago than I care to remember, when starting my PhD, a colleague, Christopher Duffy, asked if I had found the people yet. I looked at him quizzically for my head was full of the big events, the organisations, theoretical frameworks, concepts and so forth – by the end of the process I knew exactly what he meant. Plenty of names had bubbled up in the PhD but three in particular had emerged as fundamental to the development and employment of British civil affairs and military government in the Second World War.

Frederick Bovenschen, as one of a pair of Permanent Under Secretaries at the War Office, was responsible for establishing policy and did so facing a hail of alternative perspectives from across the WO and Whitehall. At a tactical level, but with strategic effect, Colonel Charles Usher (late GORDONS) soothed French concerns and provided succour to those residents that remained in Caen at its liberation in July 1944. Usher had learnt French, German, Flemish, Russian and Hindi as a POW after his capture at Mons in 1914. In 1944 he used both his French and his understanding of the French to great effect in reassuring citizens and aid workers sheltering from constant enemy artillery fire in area of Lycée Malherbe. He worked closely with the Gaullist representative in Caen, Pierre Daure (the rector at the university) in enabling him to assume responsibility for the running of the city – Usher in modern military terminology ‘supporting’ rather than being ‘supported’. Sadly, too little is written about these two characters.

The third name to bubble up was that of Francis Rodd. Rodd was a geographer focusing in particular on the southern edge of the Sahara, worked at the highest levels of private and public finance at home and abroad, and was a military administrator across Africa and Italy – although that really only touches the wave tops of his life. Rodd is a historian’s delight in that he produced copious correspondence and unlike most of those engaged with civil affairs and military government it survived! Rodd was beautifully opinionated (not that one can always agree with his sentiments) and would often highlight the issues, the people and the trends at hand with great clarity – the favourite I found was his description of the Allied Control Commission in Italy as a ‘Dog’s Breakfast and Catshit’ before going on to say why!

In rushing towards completing a project like a PhD you realise that, frustratingly, you are only touching the surface of certain aspects – often only enough to make a point. It was thus an absolute joy to read Philip Boobbyer’s incredibly thorough and absorbing account of Rodd in allowing me to explore the true scope and depth of this extraordinary individual. An individual who touched so many world events (whether political, military or financial) as well bringing greater understanding of the world through his study and publications. That Rodd worked closely with such historic figures as Keynes, Lawrence, Sykes, Picot, Bell, Cox, Mussolini, to name but a few, provided him with incredible insights and thus a level of perspective in making many effective decisions.

The parallels of the experience of Rodd with more recent events provides food for thought in lessons that might be learnt. That Rodd at the start of the Second World War was working directly with Mussolini to persuade him to sell items of military value to the British rather than the Germans points to ‘Grey Zone’ or ‘Sub-Threshold’ activity of today’s constant power competition. His links with the Italians at various stages even before the occupation of Sicily in 1943 provided Rodd with a highly nuanced understanding of the politics, culture, economy and dynamics of Italian society. It is not to say his perspectives were complete, but finding solutions that worked with the grain of the nation and its people then he was perhaps better placed. How often are ‘solutions’ imposed on a country that agitate rather than stabilise.

The ability to ‘understand’ is at the heart of any military operation – understand the enemy of course, but as a campaign continues the need to understand the civilian space as well as the battle space is increasingly realised. Such complete understanding often comes with labels like ‘fusion doctrine’, the ‘comprehensive approach’ and the ‘integrated operating concept’. General Archibald Wavell in late 1940 sent a telegram setting out that the military defeat of the Italian forces in North Africa would be ‘easy’ compared to managing the civilian population following occupation. In peacetime, militaries often revert to their ‘core’ of warfighting as it where they feel most comfortable. Wavell had experience that understood where armies end up in managing more than just kinetic activity – he had been Chief of Staff to Field Marshal Allenby in Palestine during the First World War and knew how quickly and violently populations could turn. The familiarity born of experience allowing one to anticipate is often called having a ‘fingertip feel’ in some military circles – with some using the German – Fingerspitzengefühl – to give it some Clausewitzian level of authority!

The sense that warfighting creates vacuums and that these need to be managed or otherwise they might manage you must be considered. It was in the 1940s – three Corps of troops occupied the British Sector of Germany alone in 1945 along with 6,000 military government officers – a contrast to 2003 and events in Iraq. Modern reflection, following the Chilcot Report encourages better operational planning and the debate on ‘jus post bellum’ (not to mention the Fourth Geneva Convention) encourages consideration not just of the logic of going to war but also what follows.

With characters like Rodd, if they find their way into a pivotal role, you can see that their range of experience as well as links to events and people can make them ‘Golden Thread’ characters joining elements together into a coherent whole. He is not alone – Bobby Erskine, Gerald Templer and Brian Robertson all fused their various experiences of empire, war, occupation, liberation and industry in leading civil affairs in Belgium, military government in German or counter-insurgency in Kenya or Malaya. The linkages sometimes come as a result of privilege and at other times serendipity. The coherence created is not to everyone’s tastes – the United States had very different views on how to proceed in Italy. Nevertheless, one aspect that does seem to shine through from the experiences of people like Rodd is that whilst wars are often fought for highly ideological reasons, in stabilising the aftermath then utter pragmatism that works with the grain of nation and its people is more likely to work. The modern focus on identifying the human security factors at play when conducting a ‘conflict analysis’ in this respect might provide a little hope.

The Life and World of Francis Rodd provides us with great insight into a part of history and especially military history that is frequently overlooked. In particular, it points to the immense range and depth of qualities, skills, knowledge and understanding (albeit subject to human imperfections) as well as duration of application that are required if peace and stability are to be given a fighting chance.

Dr Edward Flint is Head of the Department of Defence and International Affairs at the Royal Military Academy Sandhurst. He has delivered courses to security sector officials across the globe including 18-months deployed to the Afghan National Army Officer Academy in Kabul. His research area is examining the issues faced by militaries in their responsibilities to look after civilian populations and organisations in times of conflict.