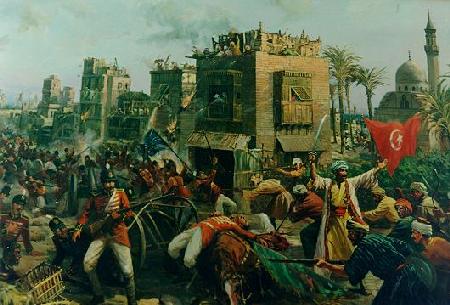 Often, the Napoleonic Wars are treated as a chiefly Euro-centric historiographical issue, within the size scale of the nation-state. That is to be expected from a series of conflicts which either imported uniform models of state administration across Europe or forced political institutions to reckon with the military and administrative novelties stemming from France, and which held a crucial place in shaping each country’s nationalist narratives. On the other hand, this approach makes the Napoleonic Wars an ideal target for deconstruction through the means of global history. Mikaberidze’s book does so by showing the wars as a complex web of interlocking and conflicting geopolitics, in which ideology takes a back seat.

A main driving force in this regard was the Franco-British antagonism, fuelled by conflicting interests of colonial expansion, that had endured for a century and a half prior to the final reckoning in the Napoleonic Wars. Since the path-breaking works of R.R. Palmer and Jacques Godechot on the Atlantic revolutions, this link has been well-known to historiography; while not new, the book’s narrative regarding the loss of the French colonial empire, and the failure to destabilise British maritime power and trade through the Continental System, is well-balanced against triumphalist assessments of Britain following the battle of Trafalgar. In a welcome integration to the Atlantic focus, Mikaberidze weaves into the narrative the long-range ramifications of the conflict, including areas such as Japan, Iceland or Oman. The crisis of Spanish and Portuguese rule in the Americas is also given ample space, vis-à-vis the events in the métropoles and the entanglement of other powers, chiefly the British seeking market outlets outside of blockaded Europe, but also the United States nurturing political ambitions, expansionism and maritime power of its own.

Global power projections created a web of relations among empires and regional powers, across the belligerent states’ spheres of influence. Great attention in this regard is given to Russia, a key player of the Napoleonic Wars which has received scholarly attention of remarkable quality in the recent decades; one only has to think of Dominic Lieven’s Russia against Napoleon. An emergent force on the European political chessboard since the Seven Years’ War, throughout the late 18th century and the Napoleonic Wars Russia pursued expansion in central Asia and encroached on northern and central Europe and the Balkans. The global perspective allows to better comprehend the extra-European consequences of Napoleon’s attempt at rapprochement with Alexander I at Tilsit, as well as the results of the agreement unravelling. These shockwaves disrupted the diplomatic and military connections the French had attempted to establish in the Ottoman Empire and Iran, in order to threaten the British hold on India and enact the eastward grand strategy devised by Napoleon’s foreign minister, Charles-Maurice de Talleyrand. France drove away a traditional ally, the Ottoman Empire, and ultimately lost ground to British and Russian influence, while the Ottomans and the Iranian Qajar rulers were forced to try to adapt to momentous military and diplomatic change. The chapters dedicated to these themes are among the most stimulating in the books, showcasing the author’s expertise on early 19th century imperial Russia and Caucasus.

The book lives up to its claim to global history, putting imperial entanglements to the forefront and offering a vast, cohesive narrative of competition and diplomacy that integrates lesser-known theatres of operations, from the Nordic countries of Europe to Africa, Asia and the Americas. Showing the Wars’ global ripples seems to reaffirm the European theatre as their centre, however, as the rupture points that doomed the French hegemony were firmly set in the European continent throughout the 1810s: the disastrous invasions of Spain and Russia, and the ability of the Coalition powers to hold together long enough to defeat Napoleon and negotiate at the Congress of Vienna, despite deep-seated mutual suspicions.

Mikaberidze’s use of primary sources and historiographical literature is highly laudable in its geographical and linguistic scope, instead of relying on English secondary sources. By focusing on international relations of this breadth, the analysis loses a degree of definition in the details, and some secondary sources are less robust than others (for instance, Claude Ribbe’s notoriously problematic book on the war in Haiti). Still, it is a valid addition to Napoleonic history and a healthy reframing away from the Western powers, which makes it particularly useful as a reference book.

Vittoria Princi is an alumna of the University of Oxford, where she has recently completed a DPhil in History researching military accommodation in northern Italy during the Napoleonic Wars.