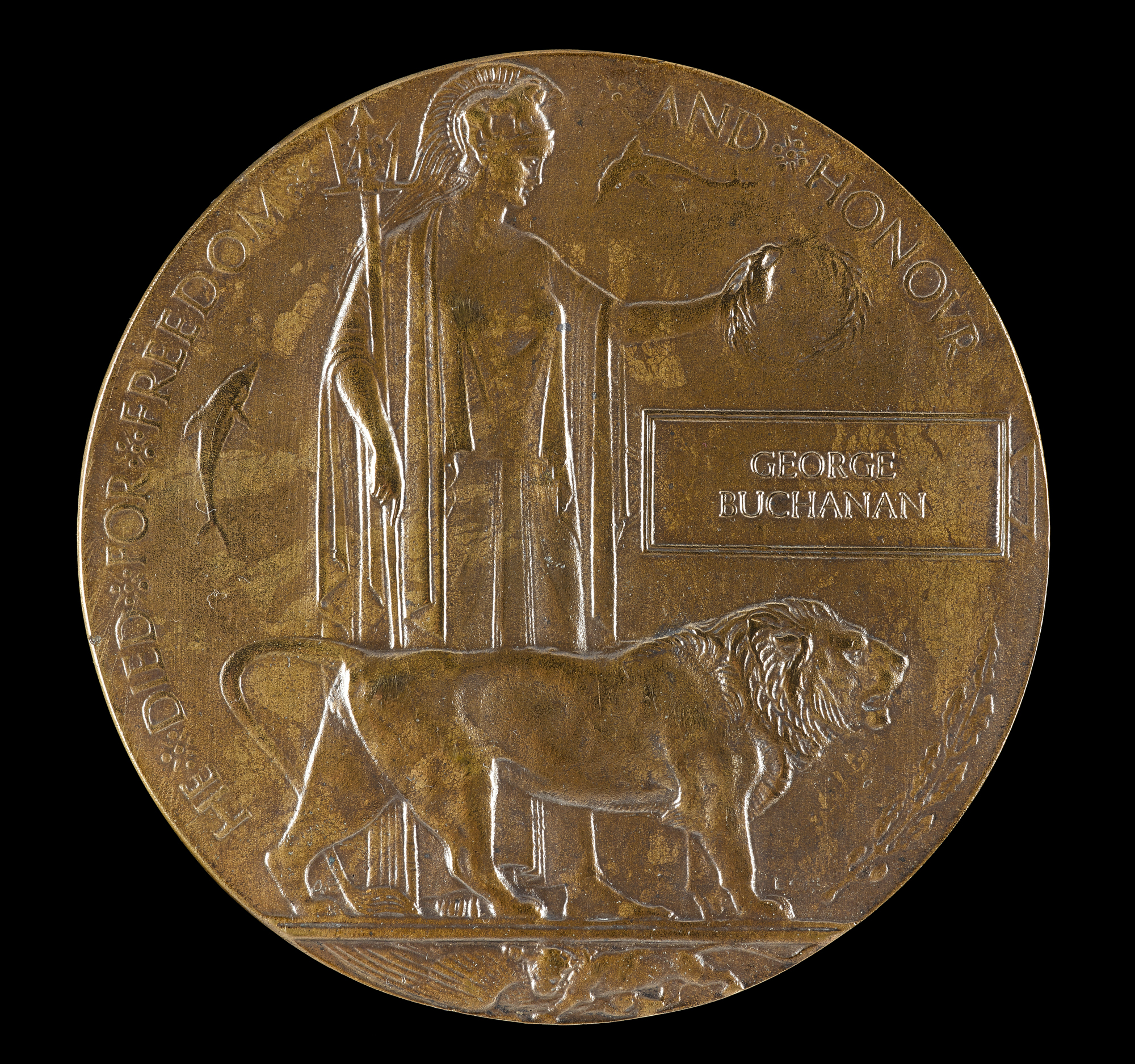 Following horrific losses after the war of attrition began to bite, David Lloyd George established a committee to work out what kind of memorial could be sent to families of soldiers who died. In August 1917 The Times announced that the memorial would be a type of bronze plaque and a competition to decide its design was begun. The prize for the winning design was £250 (which would approximately be the equivalent of £17,000 in 2019). Competition criteria stated that the designer had to be born a British subject, stipulated that enough room should be left for the name of the dead person’s name, and had to include the words ‘HE DIED FOR FREEDOM AND HONOUR’ somewhere in the design. In order to fairly judge the competition results, the committee requested that each design was marked with a pseudonym, which was also on the front of a sealed envelope containing the artist’s real name.

The competition was so popular that, at its close in December 1917, over 800 entries had been sent from around the globe. The winning design was by Edward Carter Preston and showed the figure of Brittania holding a trident and a laurel wreath, a lion prowling by her side, and, in the background, a dolphin jumping from the sea (a reference to the Navy). At the very bottom of the plaque, an Eagle (representing Imperial Germany) being killed by a lion.

The plaques began to be produced in December 1918. In theory, a Next of Kin Memorial Plaque was produced for the families of those who died in the British or Empire forces yet, in practice, not everyone who had lost a loved one received one. They were manufactured for around 2 years and, in that time, somewhere between 800,000 and 1,150,000 plaques were produced. 600 Next of Kin Memorial Plaques were made for the families of nurses who were killed, and are now highly sought after by those who collect First World War memorabilia.

The Next of Kin Memorial Plaques were sent to the relatives of the dead alongside a memorial scroll. The scroll, a beautiful reproduction of a calligraphed letter, from King George V (with some tweaked phrasing by Rudyard Kipling) stated that:

‘He whom this scroll commemorates was numbered among those who, at the call of King and Country, left all that was dear to them, endured hardness, faced danger, and finally passed out of sight of men by the path of duty and self-sacrifice, giving up their own lives that others might live in freedom.’

The name of the dead soldier was printed on the scroll and embossed on the Next of Kin Memorial Plaque.

Although the plaques and scrolls were mass produced memorials, families nonetheless embraced them as a way of mourning their individual dead. In the 1920s one could purchase a ready-made frame for the Next of Kin Plaques in shops such as Boots the Chemist. For those with more money, custom frames were commissioned, and upper-class families spent hundreds of pounds ensuring that the plaques were encased in fine material. Sometimes the scroll was framed with the plaque, but more often than not it was framed separately. These items were displayed in homes, in hallways, parlours, and bedrooms and were a common feature of houses in which someone had died in the interwar years.

As time has passed the plaques have had a varied afterlife. Some remain cherished objects in family homes. Others were relegated to attics after the death of the primary person remembering the soldier. Some were given away, and even thrown into tips during house clearings from the 1970s on.

The centenary has highlighted the importance of these plaques to families. Some are still remembering their loved ones through these plaques. Others are using them to rediscover their connection to the past. As part of the centenary initiative to collect family stories, Europeana 1914-1918, the Imperial War Museum, and the Commonwealth War Graves, among others, called for members of the public to upload photographs of their family mementoes. Some have used this as an opportunity to re-memorialise the dead in a digital space.

The King George Scroll shown in the photograph here was uploaded to the Europeana 1914-1918 website by Barbara Smith. It shows a framed memorial commemorating her Great-Uncle, Frederick Williams. As she writes in the description of the scroll, while she had seen the memorial in her mother’s house, it was only when researching her family history that her connection to him was brought to light. The family history sites created for the centenary are full of stories such as this: highly personal, yet also representative of a wider memorial experience.

As we pass out of a period of intense public interest in the First World War, who is to say how families of the deceased will continue to develop this (re)connection with the Next of Kin Memorial Plaque. If you want to digitise a family story, you can do so here.

Ann-Marie Foster is a Lecturer in History at Queen’s University Belfast. Her work looks at family memory after war and disaster in the early twentieth century. If you want to read more about the connection between families, objects, and the First World War, her latest article on veterans, families and mementoes appeared in History and Memory in 2019.

Published in Materiality and War