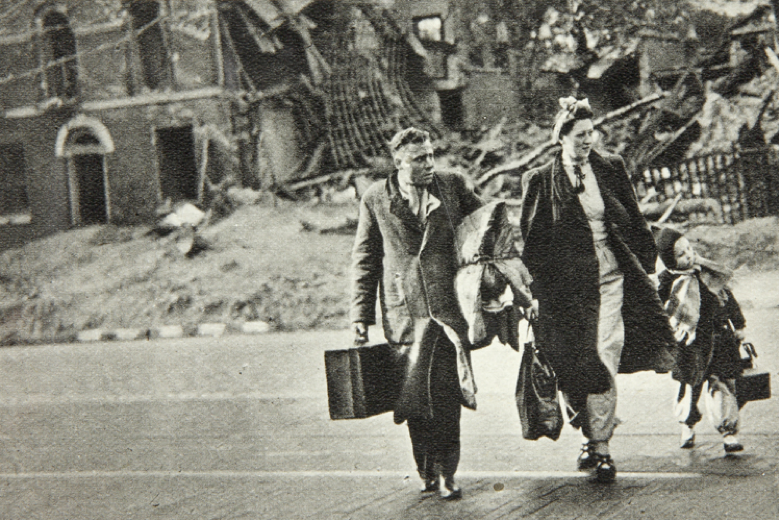 Existing studies of London’s war rightly emphasise the changing relationship between contemporaries and their city. Space played a crucial role in the imagination and experience of the damage wrought on the capital, both before and during the Blitz. Only recently has attention turned to the impact of air raids on private space, typically in relation to Susan Grayzel’s notion of civil defence’s ‘domestication’.Yet altered private space exacerbated a number of wartime tensions. As James Greenhalghhighlights, it strained the‘nominally private world of the home and the public realm of the city’. Transformations in the urban environment seeped into and altered private space; serving as inescapable reminders of the demands ‘total war’ placed on civilian psychologies.

Wartime Londoners often referred to distortions of the urban cityscape in the early weeks of the Blitz. For Joyce Weiner ‘the face of London had changed’by late 1940. ‘[Blasted] houses like stage sets faced a gaping world’, transforming the capital into a ghost town. Yet the distorted world of the urban environment did not stop at the threshold of the home. It seeped into private dwellings; redefining their visual representation and experience. On 3 September1940, for example, Ivy Haslewood of Chelsea described how the myriad of searchlights ‘lit up’ the London skyline in dramatic fashion. Four days later, she noted how this began to infect her bedroom. ‘I heard bombs whistling down in the distance…My [bed]room was lit up by the hideous orange glare and the ever-ghostly searchlights’. Bedrooms were particularly potent sites of visual distortion under fire. For some, the combination of sleep deprivation, aerial bombardment, and altered private space took on hallucinogenic dimensions. As one Mass Observer noted during the Blitz, ‘I am often prone to fear of the supernatural—especially alone in the dark…a few evenings ago I went to bed and switched off the light. The black-outs were up and the door closed, so I was astonished to see a number of white shapes in the room, which was quite dark. I told myself it must be the sheets on the unoccupied bed next to mine’. The lived experience of bombardment clearly had the potential to foster supernatural levels of fear; transforming physical reality into a surreal yet familiar ‘other world’.

Distortions of private space took on sonic as well as visual dimensions. This was often referred to in the contrast between eerie silence before and after the raids and the all-consuming noise when the bombs fell. Describing the tense moments before the impact of an air raid in September 1940, Ivy Haslewood noted how the searchlights crossed and re-crossed in ‘ghostly silence’. When the raids were in progress, however, the power of the sonic vibrations was immense. On 19October 1940, in a letter to his friend Irene Roberts, John Bingham wrote: ‘There is a fantasy about life in the South of England [writing from London] which I rather enjoy…the windows thump with 500 pounds of explosives—and explosives aimed at US as members of the public’. Alongside its frightening aspects, distortions of urban and private space had to potential to delight and even amaze. As Bingham’s letter suggests, Londoners were actors whose backdrop became the alerted spatial environment. Contemporary accounts attest to their ability to feel a multitude of emotional responses to the bombs as they fell. Yet whether they induced feelings of fear and/or amazement, the physical and psychological walls of the home did little to block their pervasive impact.

As James Greenhalgh has recently shown, the imposition of the blackout and the impact of the Blitz made individuals acutely aware that the interior of their homes were targets of outside elements. As we have seen, the distortion of private space was so jarring that many Londoners chose to frame it in reference to the supernatural and ghostly. Changes in private space were made terrible ‘not by strangeness but by familiarity’, demanding comparisons with an altered, supernatural world. This metaphor charged the destruction of the built environment with as much emotional weight as the civilians who were killed. Examination of the relationship between urban and private space under fire not only adds to our understanding of the lived experience of Londoners in the early years of the war. It tells us something more about the demands on civilians in the ‘total war’ context, as once safe spaces, were rendered vulnerable as sites of external intervention and manipulation. Londoners and British civilians more broadly faced heightened psychological pressure as the intimate spaces they lived in became distorted and misshapen. Despite such intrusions of the home and the targeting of base civilian needs, domestic morale remained intact.

Oliver Parken is an Assistant Lecturer and PhD student in the School of History, University of Kent. He is currently working on a social and cultural history of heterodox beliefs during the Second World War. The project explores the cultural and political shaping of various non-standard belief forms during the war, and how this was experienced and negotiated by contemporaries at the grassroots.  Image Credit: The National Archives UK/Flickr.

Published in War and Urban Spaces