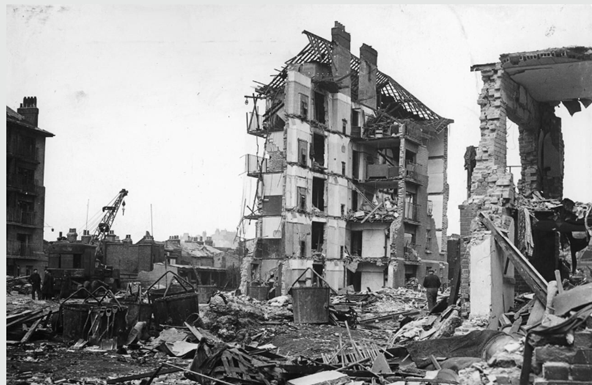 “The rockets, dearie? Can’t say I’ve ever noticed them” – Londoners respond to the V-2

Asking a historian to choose their favourite primary source is a cruel assignment indeed. Any piece of historical scholarship we embark on necessarily involves engagement with a great volume of primary material, especially those of us who work on the abundantly well-documented modern period. With whichever primary sources we look at, we hope that we will gain an insight into the past – not just how events unfolded, or why, but also how contemporaries reacted to these developments. This enables us to humanise historical actors and witnesses and to draw out their stories in a way that has resonance for modern readers.

As a result, the primary source I have chosen is a report made by the Mass Observation organisation in February 1945. Entitled ‘V-2: A Report on South-East London’, it documents across five pages a wide range of responses to the onset of the V-2 rocket bombardment, experienced by Londoners (and a few others) during the last year of the Second World War. The reports, diaries and accounts gathered by Mass Observation grant us an unparalleled insight into wartime Britain, especially the experiences of ‘ordinary people’, and have formed the cornerstone of countless social and cultural histories of the period.

What I find most enthralling about this particular report is that it records a very diverse set of reactions to this new and terrifying weapon – the first ballistic missile ever used in conflict, with London the first city to ever suffer casualties as a result. It reminds us, as historians, that ‘the public’ is not one monolithic block but rather an endlessly varied community of people, who can respond in very different ways to the same event or development.

For instance, some reacted with abject terror: “It’s awful isn’t it? You never know whether you’re going to be here from one moment to the next.” Others were more fatalistic: “What I say is if your name’s on it you’ll get it. No good worrying ‘cos you can’t do anything about it.” The authors of the report also noted how much attention some people paid to the rocket bombardment, keeping an accurate mental log of how many rockets had fallen on any given day, and how willing some of them were to talk about this new threat, if given even the slightest encouragement.

There was sadness too, as in the case of a woman who waited at the bus stop until ten o’clock at night for her husband to come home, when in fact he had been killed by a V-2 strike near his place of work. And there was a sort of morbid fascination, too, with lively discussion of the size of craters caused and the strange effect of their silent arrival (given that they travelled faster than the speed of sound). The report ends with the words of a 90-year-old woman who, when asked what she thought of the rockets, replied “The rockets, dearie? I can’t say I’ve ever noticed them.”

As this shows, even at more than 75 years’ distance, some of the resilient humour which is so often attributed to Blitzed Londoners comes through in this report. Nevertheless, it also demonstrates that many of the tropes so readily associated with British civilians under fire in the Second World War warrant a closer examination. The dominant narrative of the ‘stiff upper lip’ needs to be mitigated with accounts of fear, shock, grief, and resignation. As such, this source is a welcome reminder that when historians come up against well-entrenched myths about the past, they can do much worse than to return to the source material.

Dr Charlie Hall is Lecturer in Modern European History at the University of Kent. His most recent article, published in Twentieth Century British History, explores government and public responses to the V-2 bombardment of Britain, 1944-45.

Published in Meet the Team and Primary Sources