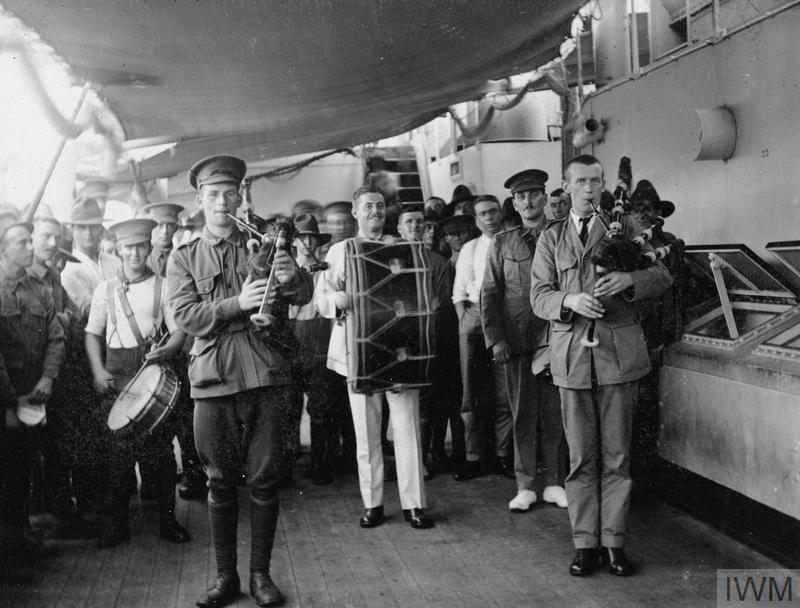 This family memory points to the importance of the subject of Emma Hanna’s book but also to one of the things I miss about it: as a universal language, music offered a possibility of encounters across cultural and national borders – with the German enemy, with French and Belgian allies, with French and Belgian citizens, but there is not so much about those exchanges in Sounds of War. There are other things I missed or about which I longed to find out more: how music could express the war experience of Tommy and Jack, and, thinking of composer-poet Ivor Gurney or Blunden’s magisterial poem Concert Party: Busseboom: the relation between music and poetry. Or, with the hideous Pipers Memorial in Longueval in mind: how music and musicians were later commemorated.

But in fact these omissions are not that important and do not reduce the book’s value because rather than providing an exhaustive overview of the significance of music for the British rank and file in the Great War, Sounds of War is above all an exploration, and as such offers starting points and a solid basis for further research into the music of that period. For we must not forget: Emma Hanna’s research is pioneering! While other art forms such as literature, poetry and the visual arts have received a lot of attention from Great War scholars in the past century, music has continued to be treated stepmotherly, even during the centenary. This is actually quite surprising as history of the senses is in fashion, and apart from smell, there are few sensory perceptions that are as capable of evoking memories as music. The publication of this book also reminds us of the need for a repertory of Great War music in addition to the already existing corpus of Great War memorials, poetry, art, etc. Perhaps this could be a future mission for the Centre for the History of War, Media and Society, or for Gateways to the First World War?

My main criticism of Sounds of War concerns something this otherwise excellent book has in common with (too) much other British First World War literature: the high occurrence of misspelled toponyms, with for instance odd variations on Wimereux, Caisse d’Epargne (a hall in Bailleul), Etretat, Reninghelst and Poperinghe. And again in common with other English First World War writing is the lack of any non-English literature in the bibliography, including Florence Gétreau’s award-winning catalogue of the Historial-exhibition Entendre la guerre: silence, musiques et sons en 14-18 (2015).

But besides these points, Emma Hanna’s opus strikes the right key, reading andante though keeping a good cadence, and going crescendo from overture to coda.

I was fascinated to see that in reading my latest book, Dominiek was reminded of his late grandmother’s recollections of the music of British troops at Poperinghe during the Great War. As he points out, this family memory underlines the importance of Sounds of War, but also of one of its major challenges, in that archival sources for the subject are scattered far and wide, and that they come in so many guises.

I was heartened to read that he recognises this ‘fine’ work is pioneering. The book is indeed an exploration into a subject which shows that music is deserving of many more studies to examine the facets Dominiek wishes I could have included in this volume. As every author knows, so much material must be edited out to fit into the confines of a monograph, particularly one in an established series with fixed word limits and parameters. One such factor was the focus on the British experience. Dominiek’s own admirable works have looked at encounters across cultural and national borders, but this was not possible in Sounds of War. This was due to the difficulties in accessing sources about the British experience written in English, which took a period of eight years in itself, as well as the question of space, and my own expertise. I include passing mentions of other nations’ music, such as British infantrymen hearing German brass bands over No Man’s Land, but more in-depth analysis of these encounters awaits further studies by scholars with the language skills and archive access to do this work justice.

Dominiek also asks about the relationship between music and poetry. It was an important factor for my work in Sounds of War to bring into the light the many un-remembered men and women who worked to entertain and educate the British armed forces, rather than those whose voices are already preserved in our cultural memory. On the misspelled toponyms that Dominiek finds all too common among other British First World War literature, for instance variations on Wimereux, Caisse d’Epargne (a hall in Bailleul), Etretat, Reninghelst and Poperinghe, I can only say that I quoted the spellings as they appeared in the sources. I will endeavour to work on this for my next book on front-line cinemas!

Dominiek’s review has identified that Sounds of War offers starting points and a solid basis for further research into the music of the Great War, and that this could be a future mission for the Centre for the History of War, Media and Society, or continued by our work with Gateways to the First World War (AHRC, 2014-2019) by way of workshops and lecture-concerts. Overall, as a long-time visitor to Ieper, I am extremely glad that Dominiek enjoyed Sounds of War and that he felt it ‘strikes the right key.’ I certainly owe him a beer when I’m next ‘over there’.

Emma Hanna is a Lecturer in Modern British History at the University of Kent. Her latest book, Sounds of War: Music in the British Armed Forces is available to purchase now.

Published in Book Reviews, Britain, History and Sounds of War