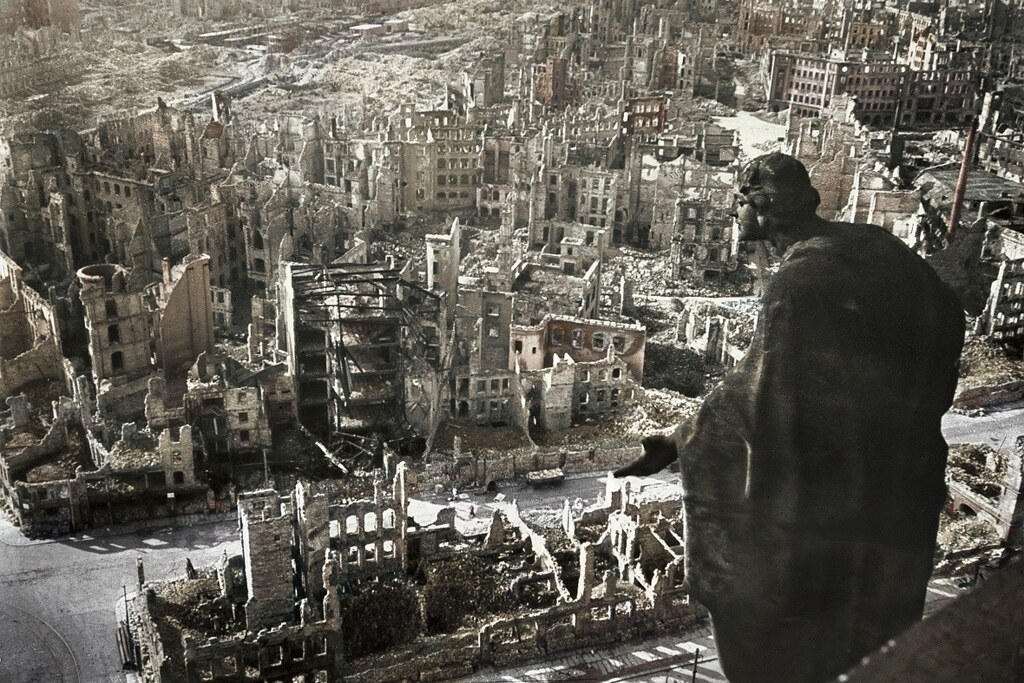 The book is split into four parts, each of which serves a different purpose in exploring this phenomenon. The first part, ‘Four Days in Demmin’, is a remarkably moving opener which very effectively draws the reader in and piques their interest. It focuses on the small town of Demmin, in Pomerania (1945 population: 16,000), which was captured by Soviet soldiers on 30 April, having previously been largely untouched by the direct effects of the war. What makes Demmin such an appropriate case study with which to open this book is the disproportionate number of suicides which took place there in the last days of the war – the exact number remains unknown (many of those who died were refugees from elsewhere or were unidentifiable as they died alongside all close relatives) but it is likely to have been around 1,000 people. Huber lays out the tragedy of Demmin in striking prose – detailing the stories of many individuals who took their own lives by hanging, poison or drowning, often taking their children and loved ones with them – though it does occasionally veer towards morbid fascination. Long lists of names and their chosen methods of suicide are evidently designed to make the figure of 1,000 feel more human but actually end up heightening that sense of detachment.

The second part of the book moves away from the largely unique case of Demmin and focuses instead on the phenomenon of suicide in Germany as a whole in the terrifying days of April and May 1945. While the greater numbers were in the East, where fears of the approaching Soviet troops – stoked by rabid Nazi propaganda over the previous four years – drove many to take drastic action to escape their dreaded fate, examples are cited from across the crumbling ruins of the Third Reich. This is perhaps where Huber’s book is at its strongest – remaining compelling while also widening the lens to grant readers a sense of how these suicides were not isolated incidents but were a significant phenomenon which can tell us something new about the psyche of those who lived under Nazism. What are perhaps missing here, however, are references to other works which could provide the greater context which Huber omits, on account of the pace and brevity of his work. Christian Goeschel’s Suicide in Nazi Germany Ian Kershaw’s The End and Richard Bessel’s Germany 1945 would all be useful to readers wanting to know more about these remarkable occurrences and to understand them against the backdrop of Germany at the end of the war.

The third part of the book takes a surprising turn, by jumping back some 27 years to the end of the First World War, in its attempt to explain the spate of suicides as an outcome of the heightened state of crisis and triumph which Germans had experienced since their defeat in 1918. The chapters which comprise this part rely heavily on a handful of first-hand accounts of life in Weimar and Nazi Germany (primarily from children and young people) which do offer some insight into the mind-sets of ‘ordinary Germans’ living through dramatic times, and how the momentous swings between highs and lows throughout this period helped create an emotional landscape in Germany where suicide seemed like a reasonable course of action in 1945. Unfortunately, it is here where Huber stumbles most noticeably, and his lack of scholarly training is most clearly exposed. He fails to interrogate the idea of ‘ordinary Germans’ in any meaningful way, nor does he engage critically with his source material. Many of the accounts utilised are from Germans who were actively involved in the regime – as Hitler Youth leaders for example – but their validity and applicability goes largely unquestioned. Furthermore, Huber barely mentions suicide in this part of the book, forcing readers to draw their own connections between the events and sentiments of 1918-1945 and the drastic responses of many Germans at the war’s end.

A greater attempt at explanation is made in the fourth part of the book, which is entitled ‘The Pull of Silence’. Here, Huber uses many of the same accounts as in Part Three, but traces the actions and feelings of their authors into the aftermath of the war. Interesting points are made about the futility of Allied denazification proceedings, the shortcomings of any national effort at Vergangenheitsbewältigung (coming to terms with the past), and the attempts made by large parts of the German population to recast themselves as victims rather than perpetrators, or at least silent accomplices, in the post-war period. Nonetheless, Huber once again struggles to fit the suicides which he detailed so meticulously in the first two parts of the book into this slightly disappointing analytical framework. While the discussions of post-war guilt (or lack thereof) among the German population are interesting, whether this had any bearing on many choosing to take their own lives is never explicitly mentioned.

In a way, that fairly accurately sums up the sort of book which Promise Me You’ll Shoot Yourself is. As the title suggests, it is gripping and emotionally powerful in places and many of the anecdotes stay with the reader even after some time has passed. There is no doubt that it is interesting and eminently readable, and the accounts he draws upon (even if they are already published elsewhere, though usually not in English) shed light on some surprising opinions and perspectives among the German population in this fascinating period. However, where it really falls down is in its failure to answer its own central question (which may, it’s fair to say, be truly unanswerable). Part Three seems to even suggest that Huber has forgotten the question itself, as he relates how some Germans felt upon Hitler’s seizure of power or the start of the war, but draws no longer-term conclusions. Ultimately, the book is memorable, intriguing and thought-provoking, but readers are likely to come away still unclear on what exactly drove so many Germans to suicide in the spring of 1945.

Charlie Hall is Lecturer in Modern European History at the University of Kent. His first book, British Exploitation of German Science and Technology, 1943-1949, was published by Routledge in 2019.