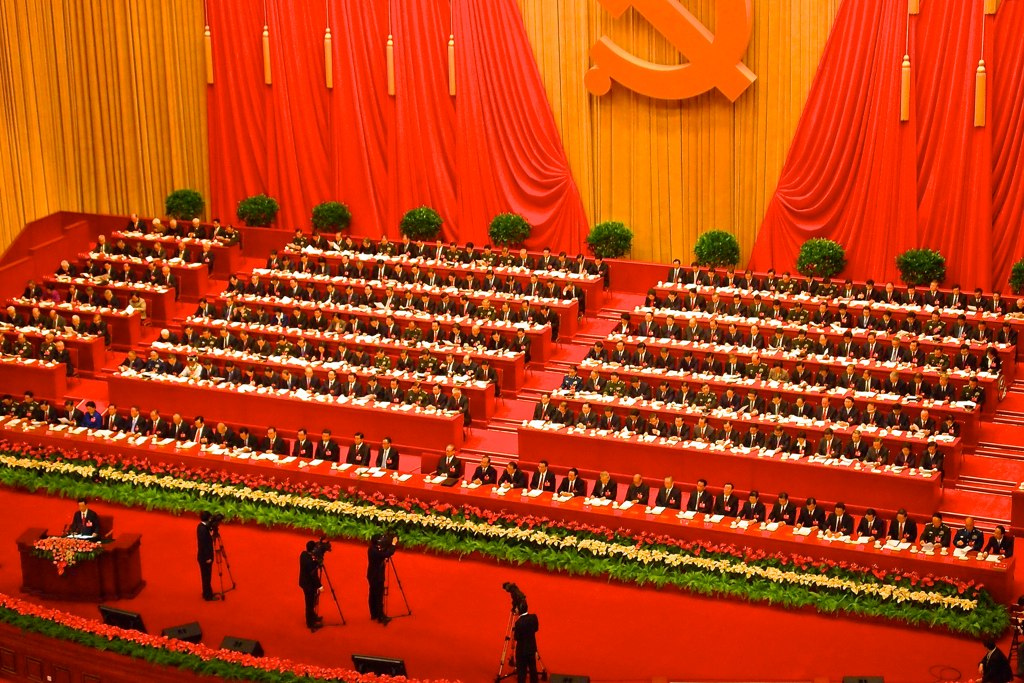 The Narratives of the Communist Party of China

One thing that the importation of the body of ideas associated with Marxism Leninism into China in the early part of the twentieth century did was to also introduce a new kind of historiography. This showed history not as a series of tragic cycles of rising and falling of dynasties and their territories – something envisaged famously in the great Ming classic from the 14thcentury, `Romance of the Three Kingdoms’ which talks of the coming together and falling apart of empires over the long sweep of Chinese history. Instead, it brought the idea of ever onward dynamic progress, with events being propelled through thesis and antithesis into improving synthesis before the process started again.

Communism, as the ideology which would allow China to finally modernise, was one of the main planks of the propaganda onslaught spearheaded by Mao and his fellow leaders from the 1930s onwards. Once in power, this idea was cemented from 1949 onwards by the Chinese Communist Party. Campaigns like the Great Leap Forward from 1957 were targeted at allowing China to industrialise on a model originally used by the USSR so that they would reach the levels of western steel and iron output within fifteen years.  Great new cities would be built, new industries introduced, and a grand new Chinese world constructed under the dynamic Party’s historic vision.

A corollary of this was the view which started to form of the past – the idea which intensified from the 1950s onwards of the country’s modern history being one of humiliation and powerlessness – something which started from the first Opium War of 1839-1841 and which only reached its climax in the apocalypse of the Sino-Japanese war from 1937. That the Communists, when they had the chance, represented themselves as liberators from this grim narrative of weakness and suffering and based much of their legitimacy on stating that they would ensure the country would never again be in this position was natural enough. They also harnessed it to notions about the dream of finally building a `strong, rich country’ – one which was to take ideas from the west but indigenise them and ensure they were used on China’s terms and in China’s own way.

These views of the general narrative of history for the nation were also ones that needed to apply to the Party. It too had a view which formed over its decades in existence and then in power of what its own role was in this grand story. And part of this was a very deliberate and conscious process of spelling this out. In 1945, before coming to power, the Central Committee of the Party produced a resolution on its own history, largely penned by Mao Zedong, who by then was supreme leader, stating that it was the body that, were it ever to win power, would finally unify and then allow a kind of redemption for a country that had been treated so unjustly. This gave the Party an almost messianic view of its own function – an organisation that would be the means by which finally the suffering nation would be able to stand up and be powerful and strong again, restored to its pre-modern status as a great entity. Whatever the historical veracity of this claim (China’s history, after all, was long and immensely complex and in many ways plural rather than singular) the Communist Party framing of it was emotionally very compelling.

That self-designated task of bringing about justice for China was the main justification for the Party’s many mistakes under Mao when the second resolution on its own history was produced a few years after his death in 1981. This posited the Party as a learning body, one which had made experiments and built up a unique knowledge of the country’s specific conditions over the last forty years in power, and which therefore had the legitimacy to continue despite catastrophes like the Cultural Revolution from 1966. The views propounded in 1981 largely survive to today. While people in 2018 therefore often talk about the post-1978 Reform era People’s Republic almost as though it were a different place to that which existed under Mao, with its practice of hybrid capitalism.  For the current dominant leader Xi Jinping, the notion that the Party is a kind of epistemic community, one uniquely placed to carry China forwards to the fulfilment of its great quest for a just outcome to history, is becoming more powerful by the day.  Seen in these terms, the Party is not so much about power per se – but power to deliver this historic outcome. That perhaps explains why, despite the many challenges and problems with its practice and its own history, it still remains so dominant in China.

Kerry Brown is Professor of Chinese Studies and Director of the Lau China Institute at King’s College, London, and an Associate Fellow on the Asia Pacific Programme at Chatham House. His most recent book is `China’s Dream: The Culture of the Communist Party and the Secret Source of its Power’ (Polity Press, Cambridge, 2018). His twitter is @Bkerrychina. Image Credit: CC by Remko Tanis/Flickr.