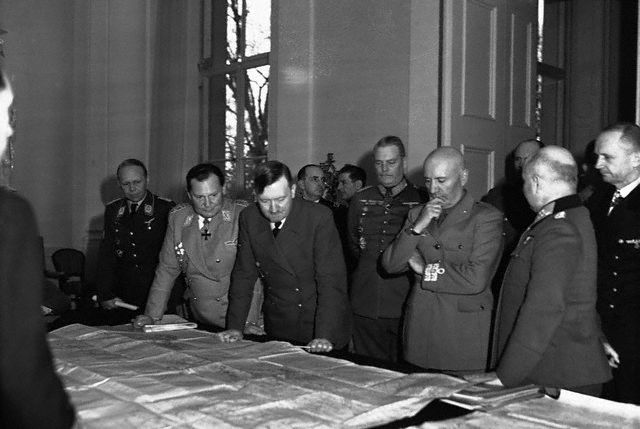 The concept of Lebensraum(‘living space’) became central to the character of Hitler’s Germany, which he viewed as its ‘manifest destiny’. It was Germany’s fate to secure all German-speaking peoples within its borders, to dominate Europe, and subsequently the world. Of course, educators had to echo this idea. Interestingly, the professionals dictating the treatment of Lebensraum had differing definitions of it. One described it quite passively as, ‘Volk­-shaped space, the domain of the united German settlement zone’. Another tied it more to Germany’s defence – ‘It must cover an area, which supplies all the goods for its preservation and defence for the people, at least in part, because it fights for its survival on its own’. The same one notes that this area ‘can only be imperfectly populated and developed by the native population’. The Nazis found many excuses to claim Eastern Europe and Western Russia as their rightful possession. One educator tied these urban areas to the threat of Marxism – ‘The masses of people without possessions in the cramped metropolitan area actually breed the feeling of homelessness. It uproots people and thus offers the best condition for sedition by Marxism [emphasis in original]. The large cities with their tenement blocks and backyards were breeding sites for communism’. So, by this definition, the Nazis were actually saving the residents of Eastern Europe and Russia from Marxism by invading and conquering them. By getting rid of these mass cities and creating a ‘backyard’ space for nature and agriculture, they would prevent communists from gaining any further footholds in Europe.

The 1938 guidelines for geography textbooks give the justification teachers would have used for the conquest of Eastern Europe: ‘Without using the term Kulturboden[German cultural area], the centuries-long German achievement must be emphasized. The cultural landscape of East Central Europe carries a lot of German features. The people of this area owe much to the German people’. A German student reading the Dierckeatlas would be tricked into thinking that Eastern Europe and the European portion of the Soviet Union existed in the modern state due to Germany’s influence. From there, it is a simple leap in logic to believe that Germany had the right to invade and conquer the region. Justifying a military conquest to the rest of the world would be much easier for the Nazis if Germany’s educated elite wholeheartedly believed they deserved the territory. The reason the Nazis wanted to avoid using the word Kulturbodenis is discussed below.

Indeed, discussions in geography classrooms were only intended to serve militaristic purposes. A 1942 essay entitled ‘The Importance of Geographical Education for Defence Geography Instruction’ includes several talking points intended to apply the atlas’s maps to the real world. They prompt students to explain the meaning of ‘the fortress of Bohemia in enemy hands’, observe how natural and man-made structures affect defense and warfare, and how ‘the location [of Germany] in the heart of Europe [and] the large number of often-hostile [surrounding] nations’ necessitates ‘a strong Wehrmacht’. Obviously, none of the intended answers involved an understanding of Eastern and Central Europe beyond their qualities as battlefields or their potential as future German territory. All the information behind these questions can be found in the Dierckeschool atlas, and while at first glance these physical maps seem innocuous or suitable for a geography class, their usage in the hands of Nazi teachers belies their objective appearance.

The atlas definitely expresses the notion that Germany deserved to rule over the entire region of Eastern Europe. The last few pages are comprised of black, white, and red maps, the first of which is titled ‘German culture in foreign countries’. The top map, which is about four times larger than the others, depicts Eastern Europe and half of Russia. Different shades of red represent the legend’s symbols – ‘Diffusion of Germans’, ‘German cultural area’, and ‘Area of German linguistic and cultural influence’. The Reich proper is compressed into the extreme left, while the ‘area of German influence’ extends deep into Russian territory. This map traces its origins to the twenty-fifth meeting of the Geographentag congress in 1934. The student council, along with one Dr Engelmann and a Dr Plauen, proposed two resolutions, one of which read, ‘All school atlases from all types of schools [should] contain at least one map of the German Volksbodenand Kulturboden’.The geographers’ Congress approved both motions without disagreement, and they were sent to the publishers ‘urgently’.

Westermann company archivist Verena Kleinschmidt explains the reason for the depiction of such a vast area of German cultural influence in the Deutschtum im Auslandmap. Geographer Albrecht Penck, famous throughout Germany, developed a new concept of Germanic territory in 1925. By ‘spatially fixing the degree of the influence of German labour’, rather than charting ethnicity or language, he cast the Kulturbodenas far east as Czechoslovakia and Southeastern Europe. A deep red on the map represents this. Kleinschmidt is quick to point out that Penck’s Kulturbodenwas was based on the völkisch concept of the relationship between farmer and soil, and not due to any racial categorization. By the end of the 1920s, the definition of ‘culture’ was so loose that anywhere where German had been spoken as a trade language, or where German laws had once applied was considered to be ‘German’. This created the map as seen in the atlas, which stretches deep into Russia.

The Dierckeschool atlas presents a militarized view of Eastern Europe, in line with the general Nazi propaganda message. Using Weimar-era concepts like the Kulturboden, the atlas presents Eastern Europe as an area shaped by German culture and language, justifying its conquest. Given the intellectual bankruptcy of the Nazi education system, it is no wonder the geography classroom contained such scant educational content.

Mike Anderson graduated with an MA from the War, Media and Society programme at the University of Kent in 2017. Image Credit: CC by WWIIHITLERTHIRDREICHHISTORY/Flickr.

Published in Maps and Propaganda