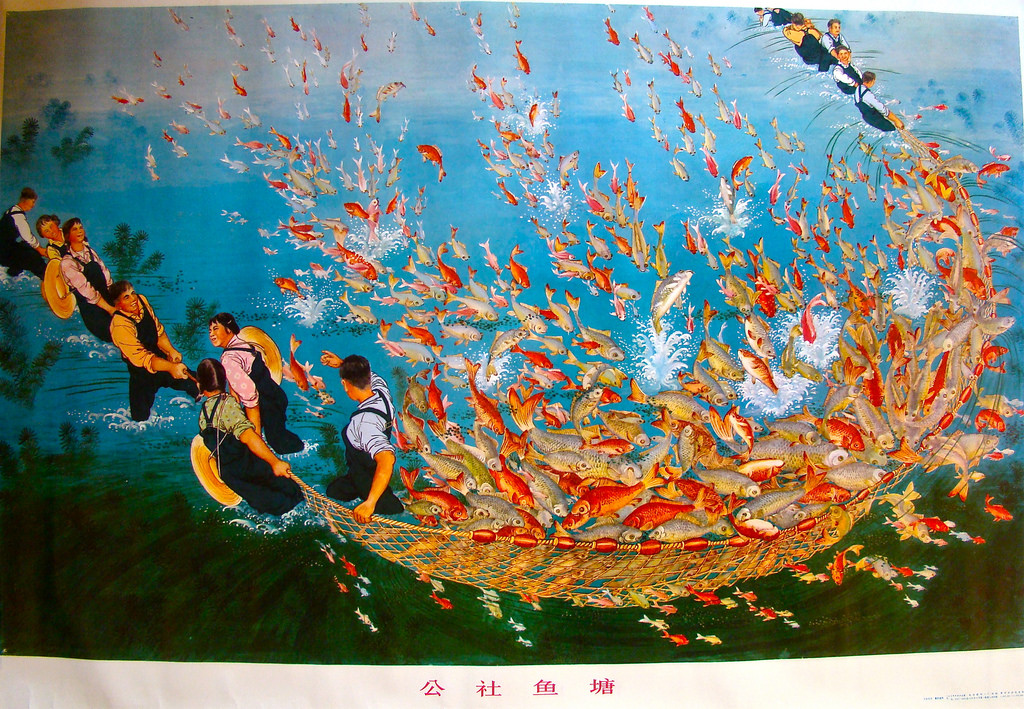 The “old society” and neighbourhood countries/regions — Creating the happy, superior new China through contrast in Chinese propaganda posters in the 1950s.

To effectively motivate the people, propaganda posters of the People’s Republic of China published before 1976 paid much attention to providing a visual fantasy for the Chinese people. From the posters, what we can see not only includes the happy and healthy children, energetic workers, and devoted cadres of the Party, but fertile farms, advanced machinery and the grand view of a town. However, the Communist Party of China also considered it crucial to provide ‘negative’ examples as a reminder – the fortune of the Chinese people to live in the socialist ‘new China,’ and the necessity to keep the spirit in order to defend the fruits of the Revolution.

Yi ku si tian (憶苦思甜, To remember the bitterness of the past and value the happiness of the present) is a popular phrase for such a propaganda strategy during the Cultural Revolution. According to this concept, there is a clear indication of the ‘time,’ which links the bitterness to the past, and the happiness to the present. Through the stories and images, the audience could grasp the information without difficulty: the speakers are usually senior people whose suffering was sometimes illustrated in the background, while the listeners are young people. This discourse emphasised much on the constructed memory, to allow the young people to know the suffering of the past, the sacrifice of the revolutionaries, and the danger of overlooking the class conflict in the present. However, in the posters in the present, the main figures are all living in the ‘new China’ and are always linked with depictions of happiness. Then comes the question: is there any possibility to reveal the suppression or desolation in the present so that the audience can feel threatened by the enemy and therefore keep class conflict in mind, especially before the Cultural Revolution?

The answer can be found in the posters depicting the suffering of people living in other regions and countries, especially the ‘neighbourhood’ countries and regions in the 1950s – an earlier period of time. Shortly after 1949, there were propaganda posters illustrating the accomplishments of the People’s Republic of China (PRC) and the benefits of a series of reformation. At the same time, the posters of the Korean War and ‘Resolutely liberate Taiwan’ were different. The audience could probably encounter something familiar in the past, such as the brutality of the counterrevolutionary army, the burning cities, and scared women/children and the tone of the posters. Comparing these images with war propaganda published before 1949, we could easily find some similar components: the burning city or village in the background, the helpless woman carrying a child on her back, the demon-like faces of the enemy soldiers, as well as the haunting weaponry of the enemy. The audience might not have the chance to see the same poster, but they were familiar with the imagery since such images almost constantly existed in their daily experience. In brief, some of the formal elements of these posters were made to exhibit the quality of ‘old’ and worn, and they visualised an on-going ‘old society’ in other countries when, in contrast, the Chinese people’s life was as bright and happy as other posters suggested.

Using the atrocities of the enemy and the pain of the people in order to raise the morale and mobilise the citizenry are popular methods of war propaganda in many countries. In this case, the Chinese propaganda system used it to promote the advantages of the socialist society in new China. From the colour to the pictorial details, the propaganda posters successfully indicated an unfriendly and unstable international environment. Of course, the ultimate solution was obvious: as long as the Chinese people remained united around the Party’s leadership and kept alert, the scene of China would always be bright, warm and happy.

Dr Jia Zhen received her B.A and M.A. in Art History from the Academy of Arts and Design, Tsinghua University, and her PhD from the Department of Fine Arts, The Chinese University of Hong Kong.  From 2005-2010, she taught several courses at the Luxun Academy of Fine Arts.  Image Credit: CC by Elizabeth/flickr