The Colyer-Fergusson building rang to some festive music-making throughout yesterday afternoon, as various musical ensembles took it in turns to bid a festive farewell to the term.

The foyer-stage hosted a seasonal ‘Watch This Space,’ in which the Flute Group made its debut in carols and the ‘Dance of the Swans’ from Tchaikovsky’s Swan Lake (well, you can’t have Christmas without Tchaikovsky, can you ?!); members of the Cecilian and Chamber Choirs sang a collection of carols; and the Trumpet Trio brought the lunchtime event to a jolly conclusion with popular tunes including All I Want For Christmas (Is You).

Later in the afternoon, it was the turn of the Big Band, directed by the irrepressible Ian Swatman, to treat a packed concert-hall to its now-customary seasonal Swing-along, featuring a guest appearance from our very own Sophie in a sassy rendition of Santa Baby and White Christmas, whilst the Brass Group led some communal carol-singing in robust fashion. The Big Band’s selection-box included a deft rendition of Have Yourself a Merry Little Christmas, a solo spot for baritone sax-player Adam Rose to open a bold arrangement of God Rest Ye Merry, Gentlemen and a lively Jingle Bells.

After the gig, audience and performers spilled out into the foyer for mulled wine and mince pies. A terrific day, concluding a very busy musical term; thanks to everyone who took part yesterday – it’s a wonderful testament to the ethos of music on the Canterbury campus, so many students, staff and members of the local community coming together in various groups to enjoy collective music-making.

We’ll be back in the New Year with details of events throughout the spring and summer; it promises to be an exciting six months ahead, judging by the draft of the forthcoming brochure; see you in January, and from all the music team – a very Merry Christmas!

The University Big Band, with a little help from the Man in Red, brought the term to an ebullient conclusion yesterday evening, rounding off a day of seasonal music-making in the Colyer-Fergusson building.

Lunchtime saw a festive ‘Watch This Space’ with music from the Chamber and Cecilian Choirs, Tutti Flutties, The Canterberries, the Dance Orchestra and jazz on the foyer-stage.

In the evening, Ian Swatman led the Big Band in some seasonal swing, including vocal contributions from Steph Richardson, Ruby Mutlow and Sophie Meikle amidst some jazz takes on Jingle Bells and other seasonal favourites, together with the Brass Ensemble in communal carols. The evening was crowned with the arrival of the Man in Red himself, greeted with a roof-raising round of applause that almost eclipsed any musical heights the Big Band had scaled during the gig.

We’re back again in the new year with our new concert-diary (published towards the start of term), which will include details of all the lunchtime, Cathedral and informal concerts happening from January to April. From all of us in the music department – a merry Christmas!

The University Chorus and Symphony Orchestra brought their term to a rousing conclusion on Saturday night in the Colyer-Fergusson hall. But the music doesn’t end there; this Wednesday, there’s a seasonal ‘Watch This Space‘ on the foyer-stage, with festive contributions from the Chamber and Cecilian Choirs, the Lost Consort, Tutti Flutties, The Canterberries and the Dance Band starting at 1.10pm; then there’s live jazz from 2-3pm.

Then at 5.15pm, the University Big Band invites us to Swing-along-a-Santa, including communal carols with the Brass Ensemble. Sadly, all the tickets for the event have now gone – it promises to be a packed and festival finale to the term.

Kicking off in October with the Marici Saxes, the Lunchtime Concert series also sees music from Covent Garden Voices and the KD Jazz and Dance Orchestra. The Brodsky Quartet returns with a concert celebrating the musical anniversaries of Wagner, Verdi and Britten, and there’s also Britten from the award-winning Kent College Choristers in Friday Afternoons. We are very excited that the Doyenne of Wagner, Dame Anne Evans, will be giving a singing masterclass and also appearing ‘In Conversation’ to talk about her career on the stage in November.

The University Chamber Choir will celebrate the beginning of the Advent season at Blean Church, and the December concert with the Chorus and Orchestra includes Vivaldi’s ever-popular Gloria alongside Respighi , Verdi and Cimarosa.

Our informal series of foyer-gigs, Watch This Space, will burst into life again on the foyer-stage, starting with live jazz in October, and the University Big Band will be providing some seasonal entertainment to round off what promises to be a very busy term.

We’re pleased to welcome the Canterbury Festival, who will be bringing the English première of a new opera by Sally Beamish in a double-bill with Britten’s Curlew River, and pianist Mikhail Rudy exploring Mussorgsky’s Pictures at an Exhibition. Other visitors to the Colyer-Fergusson concert-hall include John Harle and the Festival Chamber Orchestra, Ashford Choral Society, Simon Langton Girls’ Choir and Caritas Chamber Choir.

See for yourself online here; you can also download the new brochure (PDF) here.

The ‘Watch This Space’ series of live gigs continued yesterday, with the Colosuss Quartet celebrating the music of (and played by) Dexter Gordon, on the occasion of what would have been the great man’s ninetieth birthday.

Just published over on ‘Storify‘ is a look at the development of the series, from early sessions through to the gigs across this term.

As I type, we’re listening to the second of this week’s ‘Watch This Space’ gigs, with some beautifully melancholic material from singer-songwriter, Sabiyha Rasheed. Croydon-based Sabiyha is reading English and American Literature with Creative Writing, but is active musically on the London gig-circuit, and has also appeared on CSRfm’s Lounge Session on Sundays.

Keep an ear out, as I expect we’ll be hearing more from her in the future… 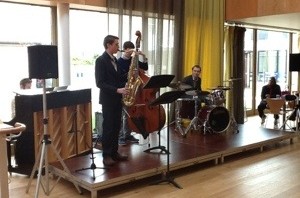 And as I type, the new Watch This Space series of informal gigs on the foyer stage is in full swing, with live jazz from the Colossus Quartet, including some if the Music Scholars.

We’ve been treated to a rich mix of Sonny Rollins, Coltrane, Gillespie and styles from swing to bossa.

There’ll be more in the series throughout the term: keep an eye on the website and Twitter for details.

Now back to the jazz…