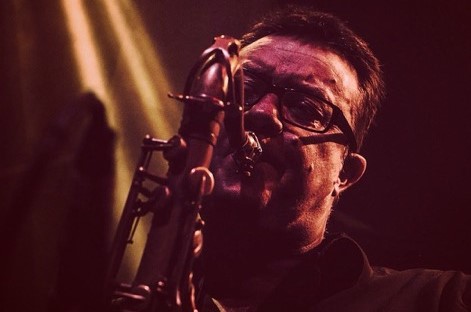 Fresh from its roof-raising gig here last Friday, there’s no rest for the University Big Band as its takes its dancing-feet down the road to St Edmunds’ School, where it joins forces with the St Edmund’s School Big Band for a rollicking night of jazz, swing and blues this Wednesday night.

Fearless captain Ian Swatman will once more be at the helm, and vocalist Louise Cookman will return for what promises to be a lively evening; tickets are a mere snip at £7 / £5 concessions, available from the Marlowe Theatre Box Office or Canterbury Ticket Shop here.

Hold on to your hats…

The Colyer-Fergusson building rang to some festive music-making throughout yesterday afternoon, as various musical ensembles took it in turns to bid a festive farewell to the term.

The foyer-stage hosted a seasonal ‘Watch This Space,’ in which the Flute Group made its debut in carols and the ‘Dance of the Swans’ from Tchaikovsky’s Swan Lake (well, you can’t have Christmas without Tchaikovsky, can you ?!); members of the Cecilian and Chamber Choirs sang a collection of carols; and the Trumpet Trio brought the lunchtime event to a jolly conclusion with popular tunes including All I Want For Christmas (Is You).

Later in the afternoon, it was the turn of the Big Band, directed by the irrepressible Ian Swatman, to treat a packed concert-hall to its now-customary seasonal Swing-along, featuring a guest appearance from our very own Sophie in a sassy rendition of Santa Baby and White Christmas, whilst the Brass Group led some communal carol-singing in robust fashion. The Big Band’s selection-box included a deft rendition of Have Yourself a Merry Little Christmas, a solo spot for baritone sax-player Adam Rose to open a bold arrangement of God Rest Ye Merry, Gentlemen and a lively Jingle Bells.

After the gig, audience and performers spilled out into the foyer for mulled wine and mince pies. A terrific day, concluding a very busy musical term; thanks to everyone who took part yesterday – it’s a wonderful testament to the ethos of music on the Canterbury campus, so many students, staff and members of the local community coming together in various groups to enjoy collective music-making.

We’ll be back in the New Year with details of events throughout the spring and summer; it promises to be an exciting six months ahead, judging by the draft of the forthcoming brochure; see you in January, and from all the music team – a very Merry Christmas! Over on the Concert and Big Band blog, On The Beat, conductor of the bands, Ian Swatman, looks ahead to Friday’s epic concert.

There’s now just one week to go until the annual roof-raiser at the Gulbenkian with the University Concert and Big Bands, on Friday 10 February.

Starring in the concert will be second-year Music Scholar and jazz singer Ruby Mutlow, who’ll be familiar to those of us who went to the concert this time last year, as well as to those who chilled out at various Jazz @ 5 sessions, and the Big Band Gala in the summer term. Possessing a characterful and wonderfully graceful voice, Ruby will be joining the Big Band for a selection of vocal pieces.

In the first half, amongst other pieces, the Concert Band will explore selections from Wicked,whilst music in the second half from the Big Band will include Duke Ellington.

Conductor Ian Swatman is his usual unflappable self so close to the gig, and he’s looking forward to his usual banter with the audience, perhaps the occasional reference to a certain Northern football club whose fortunes lie close to Ian’s heart, and maybe one or two surprises as well.

The concert starts at 7.30pm, and there’ll be live music in the Gulbenkian Foyer from 6pm with a selection of a cappella vocal groups and instrumental jazz.