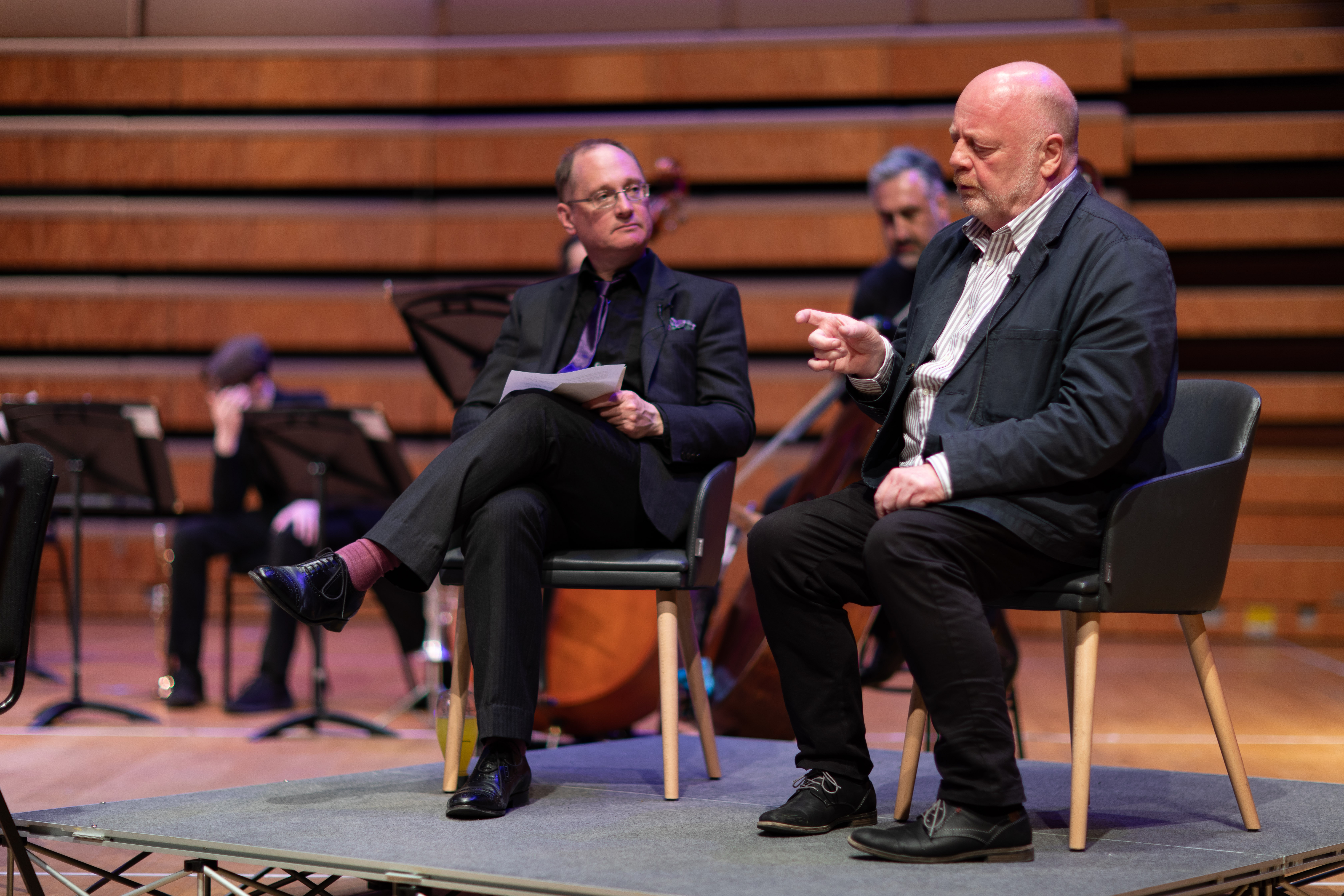 Many thanks to everyone involved in Saturday’s Composer in Focus event; a great opportunity to hear from John Woolrich, a major figure on the British compositional landscape, about his approach to composition, relationship to music from the past, and ideas behind the pieces performed by the University Symphony Orchestra, String Sinfonia and Music Scholar pianists.

John is currently Associate Artist, and has been in attendance at rehearsals and a recent performance by the String Sinfonia in Folkestone as we prepared for Saturday. The event was an opportunity to bring University musicians and John together to explore two of his works; Ulysses Awakes and Gesänge der Frühe, pieces with two distinct relationships to music of the past. As part of the event, John also talked about his approach to composing, the context surrounding the music performed, and learning from models of the past – musical ‘echoes’ being a particular, fascinating aspect of John’s music.

Thanks to Flo Peycelon for directing the String Sinfonia, to second-year postgraduate Architecture student and Music Scholar Charlotte Cane for playing the solo viola in John’s Ulysses Wakes; and also to second-year Chemistry postgrad and Music Scholar, Kira Hilton, who played the solo viola in performances of the same piece at Folkestone’s Cafe Eleto and at Studio 3 Gallery on the University campus recently. Thanks to all the musicians, including Scholar pianists Will Morgan (Economics), Michael Lam (Kent and Medway Medical School) and Hana Faizuramira (Politics and International Relations).

Contemporary music really is the lifeblood of our times; it writes in the urgent language of Now, addressing today’s concerns, and as we heard, is often mindful of its relationship to the past; how fantastic to have brought one of its exponents in to work with the Music department this week. Thank you to John for his support, and for being a wonderfully generous and insightful ‘In Conversation’ guest.

Part of the fun of exploring new repertoire is coming up with creative ideas for programming it; and for the Minervan Miniatures recital series next year, exploring forgotten or neglected piano repertoire by women composers, here’s a foretaste of how that might work – The Four Seasons by Women Composers, a suite of pieces reflecting the changing seasons, all written by women.

Not your usual Vivaldi!

The suite I’ve put together is of music by Marguerite Balutet, Mary Earl, Carrie Williams Krogmann, Tatiana Stankovych and Nannie Louise Wright, ranging from the opening Valzer di Primavera through to Autumn: A Tone Poem and closing with Winter and A Skating Carnival.

See more of the repertoire in the series on our YouTube playlist here.

A sad loss to the world of contemporary music, the death of Sir John Tavener yesterday at the age of 69.

It’s become something of cliché to write Tavener’s music off as a sort of ‘holy minimalism,’ yet this is to glibly dismiss a music that tapped into a unique corner of the British musical landscape, and one in which the composer’s profound religious faith found articulation in a music that combined striking simplicity with chromatic colours and soaring lines. His music touched the heart of millions round the world when his serene Song for Athene was sung at the funeral of Diana, Princess of Wales; his rhapsodic, ecstatic, spine-tingling The Protecting Veil achieved widespread popularity under the bow of Stephen Isserlis; his musical language – accessible, yet richly colourful – made him that wondrous thing, a contemporary composer who spoke to many, and gainsayed the argument that modern music appeals only to a tiny elite.

Listen to pieces such as The Lamb, or Today The Virgin, and hear the workings of Tavener’s unique language operating beneath the surface colours – proof, if any were needed, that modern music can touch the heart.

He leaves behind a body of work that affirmed his profoud faith, and affords a glimpse, for his willing listeners, into a realm of reflection and takes them perhaps one step closer to God. 2011 sees one hundred years since Bartok first began writing Bluebeard’s Castle, a dark and brooding masterpiece; begun in 1911 when Bartok was thirty, it was first performed in 1918. It’s his only opera, a one-act work in which only two characters appear on-stage: the secretive Duke and the inquisitive Judith, whose desire to discover what lies behind each of the seven locked doors in Bluebeard’s castle will eventually be her doom. It’s a masterpiece: the visual element is so brilliantly rendered in the orchestral score that it almost makes a staged realisation unnecessary. The glittering yet bloody armoury, the sweeping views of Bluiebeard’s seemingly limitless kingdom, the dazzling treasury where the priceless artefacts are tinged with blood, the lake of tears – the music creates these scenes so well, you almost don’t need to see a stage production’s version: better to leave it to the imagination.

The arguments rage over whether Judith deserves her fate – her curiosity uncovers an ever-deepening nightmare as each door is opened, until the final door is opened to reveal all Bluebeard’s previous wives, whom she is to join – and the psychological or pyschosexual analysis of Bluebeard himself. Does Judith’s nosiness make her fate inevitable ? She knows Bluebeard is a private person, yet she seduces and wiles him into giving her the keys and letting her open each door: does she get what she deserves ?

You can see each act on YouTube: explore the dark and dangerous world of Bartok’s Bluebeard, and decide for yourself.