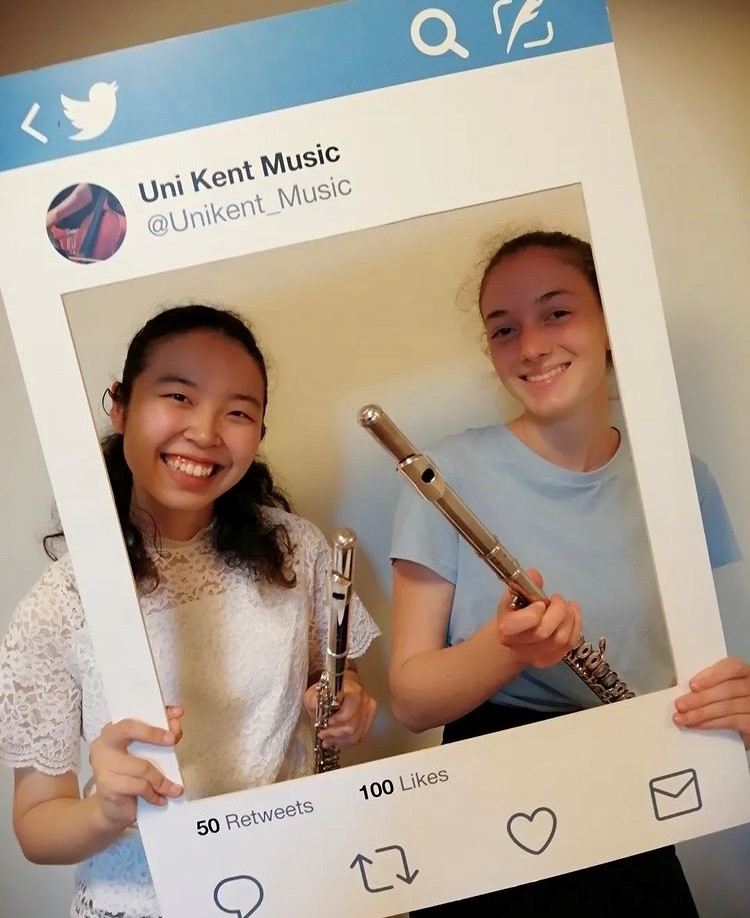 Charlotte Jeanneret, who studied at Kent last year in the School of English as an exchange student and played the flute in Concert Band and sang in Chorus in the Music department, looks back on her experience.

Music has been the highlight of my experience as an exchange student at the University of Kent.

I must say the many extracurricular opportunities are what made me choose Canterbury in the first place, but I never thought it would bring me so much joy and discoveries. Indeed, for example, I used to be stuck with the idea that I could not sing… But the openness of the University Chorus convinced me to take it up and I loved it so much that I am now considering joining the choir of my home university, here in Switzerland!

Although I still have nightmares about Goodwin’s Freefall [who chose that ?! Ed] Wednesday evenings with the Concert Band were always very entertaining and spurred me on musically more than any other ensemble I have ever been part of.  I left for England with just one flute and came back with a piccolo also!

Finally, music at Kent has allowed me to meet beautiful people with whom I have loved practising, sharing stands and scores, and who have become awesome friends.

I already look forward to coming back. 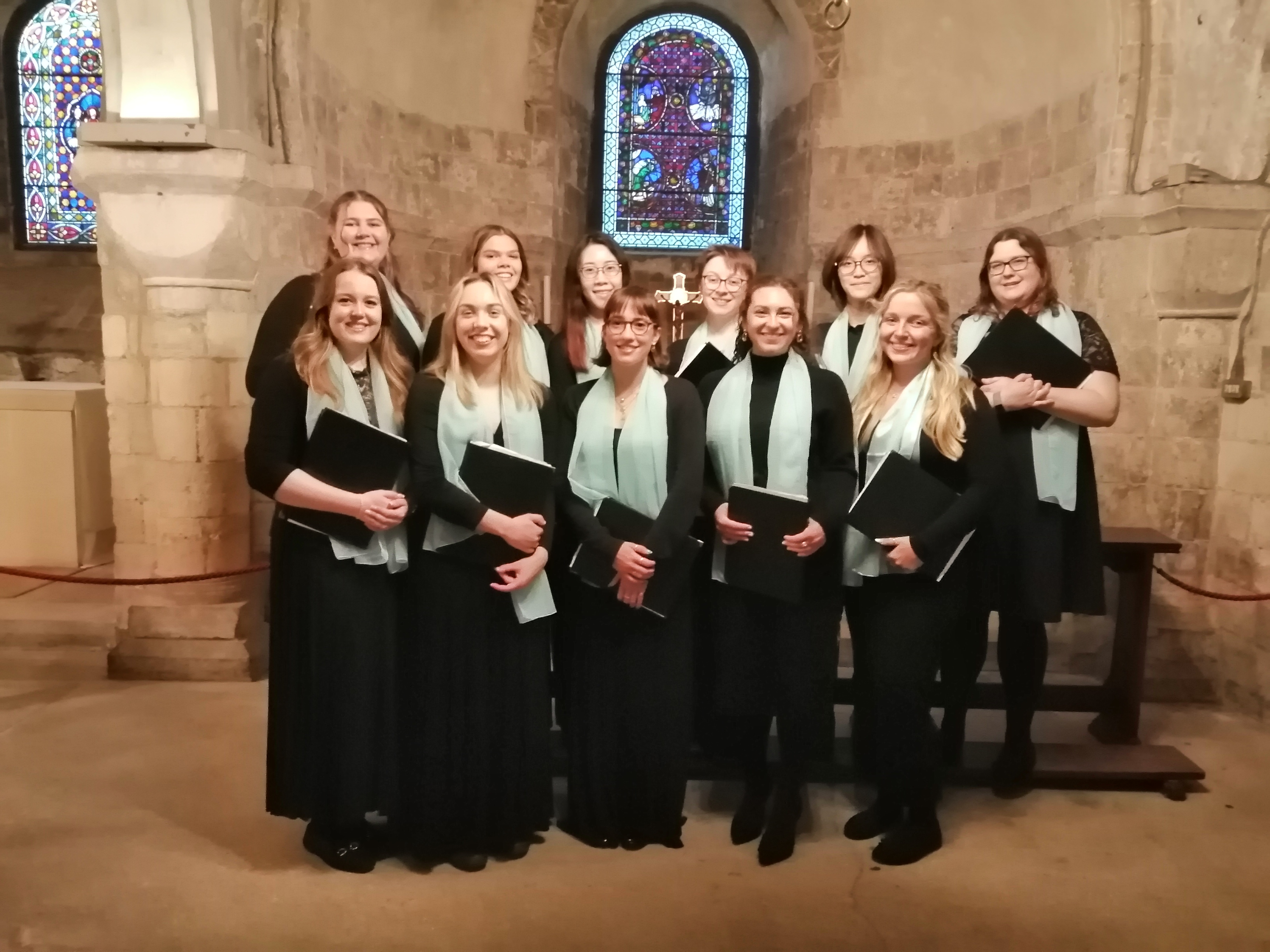 Recent graduate from the School of Psychology and Music Award holder, soprano Felicity Bourdillon, President of the Music Society 2021-22,reflects on being involved in extra-curricular music as part of her experience at the University.

When I joined Kent, joining the Music Society, and getting involved with the music department was one of the best decisions I made. Felicity (front row, middle) with the Chamber Choir performing in the Crypt of Canterbury Cathedral.

During my time at the university, I sang in multiple choirs and was able to experience many different opportunities by singing in a number of unique and historical venues; singing in Canterbury Cathedral is always such an amazing experience! The Colyer-Fergusson building is such a special place for many members of the  Music Department as it is where we came together for our rehearsals, concerts and where we share many student memories. During my time in the music department, I gained so much confidence not only as a musician but as an individual. I was able to develop so many skills and found my singing abilities to improve greatly over the years I was at Kent as a result of the opportunities within the Music Department. This is due to being surrounded by so many other young musicians and the amazing music department staff that always encourage and support you to challenge yourself musically. Filming a Scholars’ Spotlight in Colyer-Fergusson Hall during the pandemic

By being part of the music department and the Kent Music Society, I was able to meet so many lovely people; joining in first year as a fresher can be so daunting but the members of the music society were so welcoming. Meeting so many people who share the same passion and love for music making is such a lovely experience and working with them towards concerts is very rewarding. The music department is where I met many of my closest friends and to have all these shared music experiences, makes the friendships even stronger. Congratulations to everyone who graduated from the University in July, especially to the many musicians amongst the mortar-boards and gowns swirling around the Cathedral Precincts and celebrating their success. Included as part of the throng were the following:

We wish them – and everyone else who graduated! – all the very best for the future.

Former Music Scholarship student and singer, Marina Ivanova, recently appeared in the role of Papagena with Opera South East. As a Music Scholar, she sang in Chorus, Chamber Choir, and numerous Scholar recitals, including a masterclass with Dame Anne Evans; she was also a Music Prize-Winner in 2014. Here, she reflects on music-making and her recent role.

I read European Economics and French at Kent, and graduated in 2014. I had an amazing time as a Music Scholar at Kent between 2010 and 2014. One of my most memorable and exciting experiences was the Scenes from Mozart concert during Summer Music Week, and singing Vivaldi and Mozart in lunchtime recitals by University Music Scholars.

Since graduating, I have been actively seeking for new opportunities as a shorus member or a principal in opera productions. In 2016 I made my operatic debut at Brent Opera, in London, as the Singer in Puccini’s Manon Lescaut. Since February 2017, I have been working with Opera South East in a production of The Magic Flute and I was delighted to appear as Papagena in the two performances last weekend! These were in the White Rock Theatre, in Hastings.

My intention is to develop further my operatic training and to continue working on new and exciting opera productions. It’s a busy week, with parents, family and friends thronging to Canterbury Cathedral for graduation ceremonies.

Many musicians are graduating throughout the week, including some here; congratulations to everyone celebrating their success over the past five days, as they pass through the doors of the Cathedral to become part of the world-wide University of Kent Alumni community.

Thanks for all your commitment and contribution to music-making here at Kent during your time; and remember: whatever you do, make music!

Congratulations to Svenja Glass, who graduates today having completed her MA in Comparative Literature with the School of European and Cultural Languages. Svenja also studied at Kent during her Erasmus year, and has been a dedicated member of the alto section in the University Chorus. Currently undertaking a teacher training course back home in Berlin, Svenja graduates in this afternoon’s Congregational Ceremony in Canterbury Cathedral, along with many others, but this morning she couldn’t resist popping in to Colyer-Fergusson to re-visit her accustomed ‘seat’ for Chorus rehearsals… Congratulations to everyone graduating today, and to Svenja – thanks for all your commitment to Chorus – Vielen Glückwunsch!