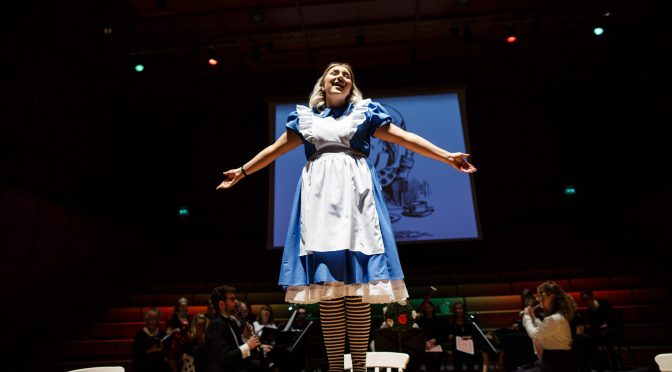 My role as a University of Kent Music Award Holder I owe to my parents, who tactfully introduced me to my first singing teacher aged 9. I had been adamant that I would ‘never sing in front of a stranger’, but as soon as my first lesson was over, I knew I would have a lifelong dedication to my voice. Once I had shed initial tears in my Grade 1 Trinity singing exam and achieved a Merit, I made a commitment to get to Grade 8, continue training my voice, and maybe even perform. I very much ‘caught the bug’. Once I had one exam under my belt, 11 year-old me grew the confidence to audition for Annie with a local amateur dramatic society, and was offered the main role. To this day, my Grandmother still talks about how shocked she was when she first heard me sing in the curly wig; “I had no idea you could even sing!” After Annie, I transitioned into secondary school, and began undertaking a variety of vocal exploits. I started singing Soprano, and then Alto with my local church choir, which encouraged me to join the school chamber choir. I discovered I had a natural ear for picking up harmonies, without having the experience of reading music, which meant I often enjoyed singing the Alto harmony lines. I performed in all the school concerts, often solo’s from musicals such as Les Misérables, The Wizard of Oz, and Oliver, as well as solos in the local church around Christmas times. I also played principle roles in extracurricular shows, such as High Society, Bugsy Malone, and Little Shop of Horrors.

Alongside, I continued my classical training with Trinity, but as I grew into my teens, my tastes in music and my voice primarily began to change. As a result, I began tutoring young students in Acoustic popular performance, and experimented with modern folk music. Throughout sixth form, I was a part of Gareth Malone’s ‘Sing While You Work’ P&O Choir, and for a short while, attached to an entertainments company ‘Blue Lemon’ where I duetted with a male pianist and singer, singing at gigs locally.

I then began working part time as a bespoke wedding singer, crafting setlists made from the Bride and Groom’s favourite songs, (having sung several brides down the aisle, I learnt the real pressure that comes with creating the perfect atmosphere with one’s voice!) When reaching my final year at school, I achieved Distinction at Grade 8, and my teacher noted my voice had range and potential to suit a variety of styles, but for me, classical music stood firmly in the forefront, as it was challenging and therefore most rewarding.

Leaving school, I moved to the University of Warwick to study English and Theatre Studies, and decided to audition for their music bursary. Instead, I was offered the Alto Scholarship, and as a result joined the Warwick Chamber Choir, all-female choir Gaudeamus, and started training with a teacher who toured with the English National Opera. In my first year, I was working with extremely difficult classical music, such as Mozart, Bach, and Purcell, which, whilst initially intimidating, I began to conquer. Singing in three choirs meant my sight reading improved extremely quickly, and by the end of my first year, I found I could read at the same level as those who played instruments. I took part in pieces such as Mozart’s Requiem, Verdi’s Requiem, Belshazzar’s Feast, Durufle’s Requiem, and Pergolesi’s Stabat Mater. I was often selected to sing solo, the most challenging being ‘Pie Jesu’ from Durufle’s Requiem in The Stratford Chapel. I was given the opportunity to travel to Nice with the chamber choir, and was lead Alto in a singing project to connect French and Chinese music together in a “Transcultural Cantata”. I worked steadily with my singing teacher to increase my vocal range to three octaves, and began to branch out into a more mezzo-soprano range. At the end of my first year, I entered the Leamington Festival, and placed 2nd in the under 25’s and 1st in the Novice category. I joined the Musical Theatre society, MTW and the Opera society. I played ensemble and solo roles in Die Fledermaus and student written opera, Jurassic Park, and then took on the principle role as Joanne in the musical Rent, performed at the Warwick Arts Centre in 2018. I then took a gap year and transitioned into second year at the University of Kent. Whilst on my gap year, I found myself yearning to perform again, and by summer 2019, I revisited the amateur dramatics society whom I had performed with 10 years ago. I was in Sondheim’s Sweeney Todd, playing the top soprano part Johanna. Taking on this challenge meant my voice grew to a top Soprano range. Sondheim’s music I found bridged the gap between musical theatre and classical styles, reigniting my love for both.

Therefore, upon entering my third year studying Drama and Theatre at the University of Kent, I took the plunge and nervously auditioned for a Music Performance Award. I was desperate to get singing and performing again, and the music department at Kent has given me endless opportunities to do so, a highlight being singing  the solo opening verse of Once in royal David’s city to begin the annual University Carol Service back in December in Canterbury Cathedral! I am currently singing with the University Chorus, Chamber Choir, and Cecilian Choir. I am working with an incredible singing teacher, and have plenty of concerts coming up this year, leading up to my graduation in July.

Music at Kent has also influenced my degree. As part of a module, I was involved in a project with children at St Nicholas School, Canterbury, facilitating music and drama workshops for children who were at risk of being excluded from the Arts due to having a range of complex needs. I used my knowledge of vocal exercises to create ambience and sensory environments with the children, leading up to an Applied Theatre performance on the main stage at the Gulbenkian. This combination of Drama and Music has also transferred into my role as Alice in the production of the  ‘Musical Dream Play’ Alice in Wonderland, by the Music Department. Drawing on both of these skills has meant my time at Kent has been thoroughly musically fulfilling, full of challenges, which has helped improve my vocal and musical knowledge in the most exciting way. I have a lot of people to thank for seeing potential in that shy 9 year-old, and will be eternally grateful for every opportunity I have been given, especially at the University of Kent. You can listen to Sophia talking about her experience of being in Alice in Wonderland in a broadcast on BBC Radio Kent‘s The Dominic King Show online here, starting at 27′ 52”.

Congratulations to everyone who graduated from the University in July, especially to the many musicians amongst the mortar-boards and gowns swirling around the Cathedral Precincts and celebrating their success. Included as part of the throng were the following:

We wish them – and everyone else who graduated! – all the very best for the future.