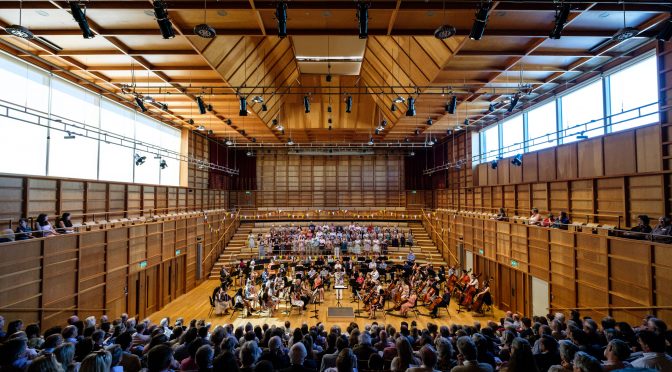 The Music Department is very grateful to have received part of a legacy left to the University by Barry Wright, an alumnus of the University of Kent.

Barry completed a Diploma in Christian Theology and Ministry as a mature student in the School of European and Cultural Learning, graduating in 2003. During his lifetime, he supported the University as a donor to the Kent Opportunity Fund and supported the Colyer-Fergusson Building, attending the opening event of the award-winning facility in December 2012.

The Music Department delivers a vibrant extra-curricular music provision as part of the experience of life at Kent, ranging from large-scale ensembles such as Chorus, Orchestra, Concert Band and Big Band to chamber ensembles, as part of a rich programme of performances and events each academic year. The end of the academic year is marked by the annual Summer Music Week, a popular series of musical events to mark the end of the University year, involving concerts both in Colyer-Fergusson Hall as well as in the Crypt of Canterbury Cathedral and the Memorial Bandstand at Deal. “Barry’s legacy will greatly enhance the lives of the musical students who pass through the University of Kent,” said Head of Music Performance, Dan Harding “as one of the bequests that generously support the Music department’s activities each year; from concerts on campus and around the region, workshops with professional musicians, exploring new repertoire and keeping the department pianos and instruments in tip-top condition, the legacy is a wonderful gift that will allow the Music department to continue to develop and enrich the lives of students, staff and members of the local community who take part in its activities each academic year.”

The University remains grateful to Barry for his generosity during his lifetime and in planning his legacy to enhance the lives of future participants in Kent’s extra-curricular musical life. It’s thanks to support from all its donors that the Music Department in particular is able to continue to provide uplifting experiences to all those who pass through the doors of Colyer-Fergusson.

Monday 23 October, 2012: the Music Department bids a fond farewell to its home since the mid-80s in Eliot College, and moves into the newly-built Colyer-Fergusson Building, to begin music-making in a purpose-built, award-winning concert hall and practice facilities.

Fast-forward to Monday 23 October, 2017, and the Department celebrated the five-year anniversary since Colyer-Fergusson opened its doors to both the University and the local community (and beyond) with a reception, open rehearsals, tours of the building, and a special exhibition of photographs from the eighteen-month construction project. It was a real pleasure to welcome donors, supporters, alumni, friends, and key people involved in the initial project, including Tim Ronalds Architects, project managers, and the former Chairman of the Colyer-Fergusson Charitable Trust, the Hon Jonathon Monckton, to share the celebrations. This wonderful building was made possible thanks to a major donation from The Colyer-Fergusson Charitable Trust, a legacy from Sir James Colyer-Fergusson himself, contributions from over 200 other individual donors and support from the Higher Education Funding Council for England’s Matched Funding Scheme; a true coming together of the generosity of Sir James together with many of the donors and supporters of music-making at the University, to establish a landmark building that has afforded new opportunities for rehearsing and performing. Thanks to their generosity, the Music Department now offers an ever-developing breadth of musical opportunities, both to showcase the extraordinary commitment and talent of the students (and staff) who, each year, participate in extra-curricular performances, as well as to provide the main concert venue for many of the local community groups, schools, youth organisations and visiting summer schools. Alongside other major venues throughout the region, Colyer-Fergusson has now become a key element in the south-east’s flourishing cultural reputation. Throughout the day, rehearsals in the hall featured student and staff musicians including the Chamber Choir, string ensemble, third-year Music Scholarship flautist Natanya Freedman, members of the Musical Theatre Society, and a special Come and Sing in which everyone present arrayed themselves around the choral risers to sing Somewhere Over The Rainbow. On behalf of the Music team, our thanks to everyone who attended, who was involved in making the Colyer-Fergusson Building possible, and to the Events team who kept the invited guests fed, watered and on occasion even chased errant balloon-displays which were endeavouring to escape down Giles Lane.

Here’s to the next five years…

First-year students from the School of Architecture have been visiting Colyer-Fergusson this week, in particular to sketch the concert-hall; here are a few of their responses to our award-winning space. It’s with an heraldic fanfare of trumpets that we’re delighted to announce that the new Colyer-Fergusson Gallery space is now open, with its first exhibition being the evocative and scenic #walkSwaleMedway project by Faversham-based artist, Hope Fitzgerald.

The upper balcony now hosts an array of jewel-like images in beautiful frames, inspired by Hope’s walking project, and will be on display for two weeks until Friday 1 May. The exhibition is also the first of several ancillary events for the Tokaido Road chamber opera coming to the Gulbenkian next month, which explores similar ideas of travel and landscape. Hope’s exhibition is a response to, and is inspired by, her walking around the Swale area; read more about the project here. Admission is free: come and lose yourself in the landscape of the county in Colyer-Fergusson. #walkSwaleMedway is sponsored by Arts Council funding via Ideas Test.

One of the very great strengths about Colyer-Fergusson is its mulitplicity of purposing – the flexibility of the concert-hall, the practice-rooms functioning as green rooms during events, the social area that also works as a performance space – and we are very excited to be drawing further on the building’s potential next month by launching the Colyer-Fergusson Gallery, which will run the length of the upper balcony. The building welcomes plenty of visitors on a daily basis – people using the practice rooms, ensembles using the rehearsal spaces, music teachers working with the Scholarship students, as well as members of the University community and the general public using the social areas or passing through on their way through to the Gulbenkian. At weekends, the building throngs with external events; choral concerts, orchestral performances, visiting performers. The first-floor balcony is a large space that offers scope for visual art to be presented to those moving through the building, and next month sees the first of three planned exhibitions which will adorn its walls.

The first two exhibitions form part of the Tokaido Road project (a touring chamber opera with a libretto by Nancy Gaffield, Senior Lecturer in Creative Writing, to music by Nicola LeFanu, which comes to the Gulbenkian Theatre in May):  Walk Swale Medway by Faversham-based artist Hope Fitzgerald, and Saxon Shore Way: a response to Tokaido Road by the local collective, Earthbound Women. Both exhibitions will explore similar themes of journeying and of travel, as part of the project, drawing inspiration from the landscape and the history of Kent. In September, to coincide with the Alumni Weekend, the gallery will host a photographic exhibition by the University’s very own Matt Wilson, whose excellent photographs of music events often feature on these pages.

There’ll be more about each exhibition nearer the time. Walk Swale Medway will be the first to grace the exhibition space, and will run from Friday 14 April to Friday 1 May. Leaflets about the new gallery can now be found in the foyer.

Well, ok, it’s not directly about music on this, the music blog, but it’s pretty exciting, so I’m going to write about it anyway!

The Kent Wheel opened this afternoon on the University campus, a talisman to draw the gaze from afar as it will stand tall on the greensward between Eliot and Rutherford Colleges over the next three weeks. The ferris-wheel is here as part of the beginning of a year-long celebration of the University’s fiftieth year, which will celebrate the University’s history, its ever-growing alumni community, the achievements of its staff and students, as well as its place as a part of the local community.

Deputy Vice-Chancellor Keith Mander gave a short speech reflecting on the many changes in the political and cultural landscape over the past fifty years, before wielding the scissors to cut the ribbon and declare the Kent Wheel open.

A team of specially-invited guests then took the opportunity for the first ride. The views across the region promise to be quite spectacular.

My name is Yingqi Lin, a Digital Visual Effects MSc student in 2014, and I’ve just finished my year.

This showreel is the best work of mine when studying in Kent this year. I chose the concert-hall and staircase because I love the warm orange lighting in the music building and the wooden texture is perfectly meet what I need for the flower-growing scene.

A long time ago I wished I could do the plant growing, and the staircase was just the right place and when I saw flowers growing, it did give me a vibrant feeling!

I love vfx, and love this university. Thanks for everything and everyone that I met in the UK this year.

We’re delighted to announce that the Colyer-Fergusson Building was a winner at yesterday’s Wood Awards.

The building won the “Commercial and Public Access” category at the Wood Awards yesterday evening, for its deployment of wood in construction, particularly the use of Douglas Fir. As Tim Ronalds Architects, designers of the building, state:

The walls and ceiling are completely lined in Douglas Fir Plywood, supported on a steel frame, and braced with solid Douglas Fir rails which stiffen the linings to avoid any unwanted resonance at musical frequencies, and provide acoustic diffusion. The acoustics can be modulated to suit music-making of all kinds with curtains that transform the interior into a soft, fabric-lined space, and retract behind the timber wall linings when not in use.

The design provides an unusual degree of flexibility for a hall with world-class acoustics…The retractable seating is finished with Douglas Fir fascias, continuing the material and rhythm of the hall lining panels.

Read more about the building on the Wood Award website here.