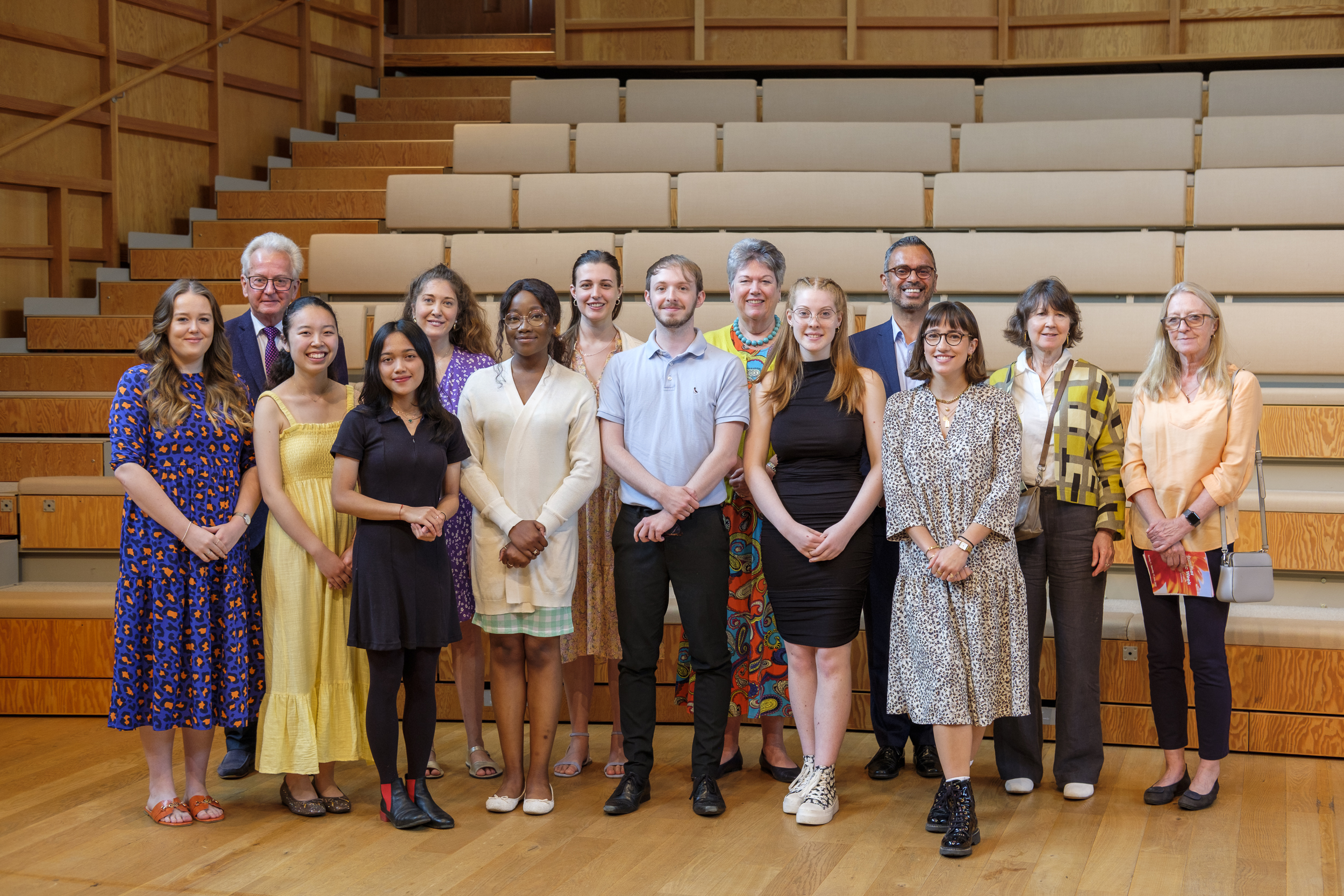 One of the highlights of Summer Music Week is the Music Prizes ceremony, an occasion to recognise the outstanding contributions made by some of those taking part in extra-curricular music over the course of the academic year.  This year, we were especially delighted to return to the in-person ceremony, which follows the annual Music Scholars’ Lunchtime Recital, and to welcome supporters, benefactors and guests for the first time since 2019.

Director of the Canterbury Festival, Rosie Turner, was present to award the Canterbury Festival Prize, awarded annually to a  final-year student who has made an outstanding contribution to music at the University. This year’s winner was second-year postgraduate Architecture student, Charlotte Cane;  a Music Performance Scholar, leading the second violin section in the Symphony Orchestra as well as playing viola in the autumn term, and a viola player in the String Sinfonia, Charlotte also performed the solo viola part in Ulysses Awakes by John Woolrich in the Composer in Focus event with both the composer and her teacher present.

Former Pro Vice Chancellor and current Chair of the Board of Canterbury Festival, Professor Keith Mander, presented the  Colyer-Fergusson Music Prize: awarded to a student who has made a major contribution to the organisation of music at the University. This year’s winner was second-year Architecture student, Holly Porton;   Secretary to the Music Society, Holly has been particularly helpful in dealing with administrative connections between the Music department and the Music Society. Holly also played clarinet in the Symphony Orchestra and Concert Band, violin in the String Sinfonia, and played piano in the pit band for the spring production by the Musical Theatre Society.

The John Craven Music Prize: awarded to a returning student who has made a major contribution to music at the University, and this year was awarded jointly to Kammy Pike and Michael Lam. Second-year postgraduate in Biosciences and a Music Performance  Scholar, Kammy Pike has led the Symphony Orchestra this year including in the annual Cathedral Concert, and also plays in the String Sinfonia, with whom she played the final solo movement of Vivaldi’s Spring in a recent performance.

Second-year undergraduate and a Music Performance Scholar in the Kent and Medway Medical School, Michael Lam gave an outstanding recital as part of the spring term’s Lunchtime Concert series, the first student to be invited to do so, delivering a highly-accomplished programme entirely from memory. He also played the celeste part in the December concert in Tchaikovsky’s The Nutcracker Suite. The John Craven prizes were presented by Head of Music Performance, Dan Harding (awarded to Michael in absentia, as Michael was on placement throughout the week).

The David Humphreys Music Prize is warded to a student who has made a particularly special contribution to music-making; this year, it was awarded jointly to Joanna Adaran, Felicity Bourdillon and Nathan Sharp , and presented by David’s daughters, Belinda and Jo, who spoke briefly about their father’s enjoyment of, and support for, music.

Final-year Comparative Literature and Drama student, Joanna Adaran is a Music Performance Scholar and has been a major participant in this year’s activities by the Musical Theatre Society in showcases and events, and also had a principal role in the society’s production of The Hunchback of Notre-Dame performed in the Great Hall of Kent College in March. She also sings with the Cecilian Choir.

Final-year Psychology student Felicity Bourdillon holds a Music Performance Award; she has really grown in her abilities this year, taking a lead role in the Chamber Choir, Cecilian Choir and Chorus; she sang the opening solo verse in the University Carol Service at the Cathedral in December, and will be singing the solo Pie Jesu movement of Faure’s Requiem in the chamber choir Crypt concert in June. Her singing has really developed this year, and she has led the soprano section in chamber choir particularly with authority.

Second-year Music and Audio Production student and Music Performance Scholar, drummer Nathan Sharp has been a major force behind the weekly live music nights and Open Mic nights at the Deep End venue in Medway with the Medway Music Society, playing in numerous bands and also being partly responsible for organising the events. He also performed in the Pop Platform event in the Gulbenkian Café in December.

The final prize, presented by the Director of  Engagement, Philip Pothen, was the University of Kent First-Year Music Prize, which is occasionally awarded to a student who has made a major contribution to music in their first year , and which was awarded to to Yuyu Hosokawa.  Yuyu is a highly accomplished flautist, a Music Performance Scholar and a vital member of the woodwind section in the Symphony Orchestra, playing with poise in both the December and the March Cathedral concerts, as well as taking part in a Music Scholars’ masterclass with the London Conchord Ensemble in March. Together with the Music Scholars’ Lunchtime Recital which precedes the award ceremony, the two events are an excellent opportunity to highlight some of our outstanding performers and participants who have made such a vital contribution through participating in extra-curricular music alongside their studies, taking the opportunity to engage in rehearsals and performances as part of their cultural life whilst at Kent.

Congratulations to all the prize-winners, and our thanks to all the guests, supporters, and those presenting the prizes, as well as to the performers and all those who came along to support the event.

We’re delighted to announce that the Colyer-Fergusson Building was a winner at yesterday’s Wood Awards.

The building won the “Commercial and Public Access” category at the Wood Awards yesterday evening, for its deployment of wood in construction, particularly the use of Douglas Fir. As Tim Ronalds Architects, designers of the building, state:

The walls and ceiling are completely lined in Douglas Fir Plywood, supported on a steel frame, and braced with solid Douglas Fir rails which stiffen the linings to avoid any unwanted resonance at musical frequencies, and provide acoustic diffusion. The acoustics can be modulated to suit music-making of all kinds with curtains that transform the interior into a soft, fabric-lined space, and retract behind the timber wall linings when not in use.

The design provides an unusual degree of flexibility for a hall with world-class acoustics…The retractable seating is finished with Douglas Fir fascias, continuing the material and rhythm of the hall lining panels.

Read more about the building on the Wood Award website here.

Mark had to carry the award, made from lead, heroically back from the awards ceremony in London all the way to Dover after the event; and believe me, it’s heavy…Worth the effort, though…! 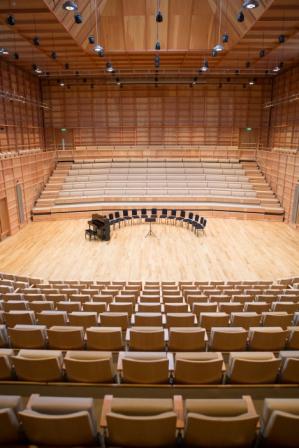 Still flushed with the success of last week’s musical extravaganza that was Summer Music Week, we’re delighted to announce that the Colyer-Fergusson Building won a RIBA (Royal Institution of British Architects) National Award 2013 on Wednesday evening.

It is one of only two buildings in the Southeast to win a 2013 RIBA National Award for architectural excellence and one of 43 to win nationally, and will now go forward for RIBA’s top award, the Stirling Prize, with the shortlist being announced on 18 July.

Fantastic news for the University, and for Tim Ronalds Architects. Fingers crossed for July…

We are particularly delighted to reveal that the Colyer-Fergusson music building is one of two buildings from the University which has been shortlisted for the 2013 Royal Institution of British Architects Southeast Regional Awards.

Both the music building and the new Crit Building (part of the School of Architecture) have been shortlisted for the presitigious award, of which the winner will be annouced in June.