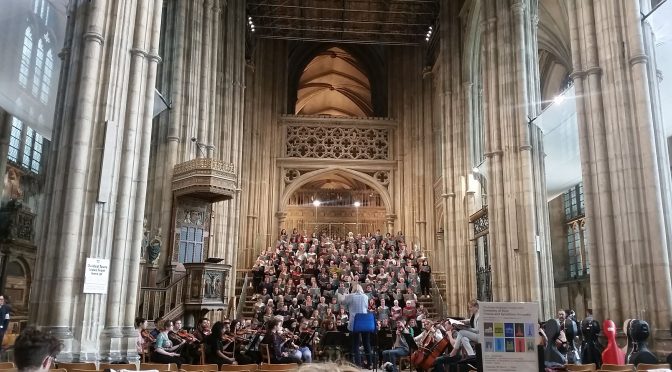 Congratulations to everyone involved in last Saturday’s annual Colyer-Fergusson Cathedral Concert; to all the performers in the University Chorus and Symphony Orchestra, the stewards, those working behind the scenes, conductor Susan Wanless and soprano soloist, Rachel Nicholls. 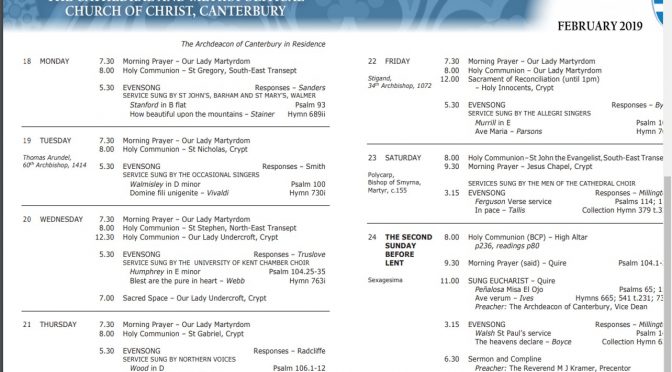 Many thanks and congratulations to the members of the University Chamber Choir on delivering a fine Choral Evensong at Canterbury Cathedral yesterday.

The students travelled down the hill to participate in the centuries-old tradition of evensong, with a colourful set of Responses written by David Truslove, and the evocative anthem Blest are the Pure in Heart by composer James Webb, both of which rang beautifully in the lofty roof of the Quire.

And thank you to James, who had travelled down to Canterbury especially to hear the Choir perform his piece. It was a lovely opportunity for the students to participate in the daily life of the Cathedral and experience the nature of the service of Evensong.

We return to the Cathedral for the annual Colyer-Fergusson concert in the Nave on Saturday 30 March, and the University Cecilian Choir will be singing Choral Evensong on Tuesday 28 May.

Congratulations to all the performers involved in Saturday night’s annual Colyer-Fergusson Concert, which saw the Nave of Canterbury Cathedral resounding to the heroic strains of Beethoven, Haydn and the premiere of a new work by Matthew King.

The Chorus and Orchestra came together under the baton of Susan Wanless in Haydn’s dramatic ‘Nelson Mass,’ joined by several alumni, and the Orchestra (led by final-year Law student and Music Scholar, Lydia Cheng), delivered Beethoven’s mighty Eroica symphony with aplomb.

Composer Matthew King and family were present for the first performance of Matthew’s A Hero Passes, an orchestral tribute to his late father, James King OBE, with which the concert opened. Matthew attended rehearsals the night before and on the morning at the Cathedral. Thanks to all the behind-the-scenes crew as well, on what is a particularly long day; here’s Your Loyal Correspondent and the Music Administrator clearly early on the day…There are still plenty of events to come over the next few weeks: see what’s next here. Students from across the world come to the University of Kent, and this is certainly true of the thronging community which also takes part in the musical life of the University each year. This year, Max Mergenbaum came to Kent to study Politics and International Relations for two terms as an exchange student at the Freie Universität in Berlin. Max played bassoon in the Symphony Orchestra and the Wind Ensemble, and had this to say as he departed these shores to return to Germany.

“Playing in the University of Kent Orchestra was both an honour and a pleasure for me. As a visiting exchange student from Germany, I received a lot of support from the start. Being able to play Verdi’s Requiem in the Canterbury Cathedral was definitely one of the highlights of my year abroad which I will never forget. It was amazing to play together with so many talented young musicians. Following the motto of the music department ‘Whatever you do, do music’ I can only recommend every student coming to Kent to join this fantastic orchestra!”