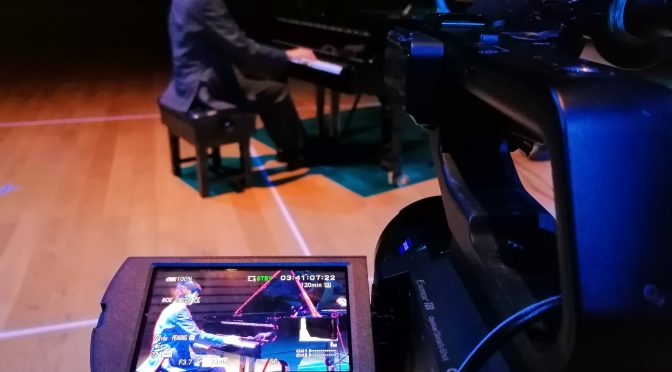 The second in our Lunchtime Concert series next week sees the Kentish Piano Trio performing music by Beethoven and Suk, including (appropriately enough for a blog feature today…) Beethoven’s ‘Ghost’ Trio.

Violinist Kathy Shave, cellist Julia Vorhalik and pianist Helen Crayford, three outstanding professional musicians based in Kent, formed the ensemble in order to champion both traditional and contemporary works for piano trio, and have commissioned works as well as explored the catalogue of works for the enduringly popular line-up.

The concert takes place on Weds 9 November at 1.10pm in Colyer-Fergusson Hall, admission is free, donations welcome. To whet your appetite, here’s the trio on spooky form in the slow movement of the ‘Ghost’ Trio… The termly concert by the University Chorus and Orchestra last night saw three musical alumni returning to the Colyer-Fergusson Hall.

Soprano Caroline Kennedy, tenor Andrew Macnair and bass Piran Legg came back to Kent for a performance of Mozart’s Vespers, joined also by mezzo Bethan Langford. whilst the Orchestra furnished the remainder of the programme with Mozart’s overture to The Magic Flute and Beethoven’s Seventh Symphony.

Under the baton of Sue Wanless, the Orchestra delivered a sprightly and rousing reading of the Beethoven, in particular with an agile second movement that deftly steered clear of the more usual funereal tempi often heard in performance. The concert also saw second-year violinist Chantelle Yau making her debut as orchestral leader.

The next time Chorus and Orchestra perform, it’ll be in the august surroundings of Canterbury Cathedral for Verdi’s Requiem as part of the University’s fiftieth-anniversary celebrations. And That Famous Bass Drum Bit..