Last Wednesday proved another milestone in the life of the Colyer-Fergusson building, when the first CD to be recorded in the Hall arrived on our desks. In August 2014, the internationally-renowned harpsichordist and conductor (and Honorary Graduate of the University of Kent) Trevor Pinnock spent two days recording works by Cabazon, Byrd, John Bull, Sweelinck, JS Bach, Frescobaldi, Handel and Scarlatti. It was wonderful to hear such amazing music drifting over the Hall relay into our offices and we were even invited to sit in on some of the takes. The extraordinary acoustics of the Hall proved so sympathetic that Trevor and the recording team actually finished a day early. Trevor has very kindly acknowledged the Colyer-Fergusson Hall and the University Music department team in the CD leaflet; the disc, Trevor Pinnock – Journey; Two Hundred Years of Harpsichord Music is available on the Linn label here.

Next week brings a brace of Baroque performances from some renowned musicians to Colyer-Fergusson.

Our new Lunchtime Concert series launches next Wednesday with a recital from Baroque recorder specialist, Naomi Okuda Wooderson, accompanied by Tom Foster; the programme includes Bach, Telemann and Handel, and features our new harpsichord in its first formal outing. Admission is free, with a retiring donation. The Baroque theme continues at the weekend with a performance of Purcell’s Dido and Aeneas under the direction of distinguished performer and conductor, Trevor Pinnock, in a preview of the concert which will be appearing at London’s Wigmore Hall the following week. The chorus for the performance is none other than Tenebrae, one of the country’s foremost vocal ensembles; the concert also promises a Purcellian miscellany of songs and dances.

Details about both concerts can be found on our What’s On page online here. To whet your appetites, here’s Sarah Connolly singing that famous lament…

A busy few weeks ahead; tonight’s concert sees period-instrument pioneer and Honorary Graduate Trevor Pinnock bringing an all-Bach recital to Colyer-Fergusson as part of our fiftieth-anniversary celebrations; next weekend, we are delighted to be welcoming Nova Music Opera to the hall for their concert as part of this year’s Canterbury Festival in a double-bill of contemporary chamber opera by Stephen McNeff and Cecilia McDowall.

And as October ends with a flourish, the start of November also marks the launch of our ensemble-in-residence, CantiaQuorum, in a pair of concerts featuring music by Stravinsky, Walton, Bach and Copland.

Plenty to console us as the clocks go back next weekend; for tickets and further details, see all that’s happening on our What’s On guide here.

Here’s composer Stephen McNeff talking about his chamber opera Prometheus Drowned, coming to us next weekend. 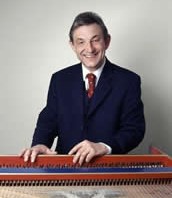 Hold onto your hats: the new What’s On for September to December has now been published online.

Embracing everything from ancient instruments to contemporary chamber opera, the Colyer-Fergusson Hall will be abuzz this Autumn, bringing some of the very best music across the next four months.

The Lunchtime Concert series begins with Rags to Riches, as pianist Helen Crawford brings her period-costume-bedecked performance of ragtime music on Weds 8 October; we’re delighted to be launching the new ensemble-in-residence, CantiaQuorum, who open their residency with Bach and Copland on Weds 5 November, as a curtain-raiser to their first formal concert later in the month with Stravinsky and Walton. December’s lunchtime concert involves the Society of Strange and Ancient Instruments exploring the common ground between Renaissance, Baroque and traditional Norwegian music.

We’re also participating in the University’s fiftieth-year celebration through 2014-15, including featuring alumni and Honorary Doctorate recipients; and as the latter, we are delighted to welcome acclaimed harpsichordist and conductor, Trevor Pinnock, in October in a recital of music by Bach.

Chorus and Orchestra perform music by Mozart and Beethoven, and the term concludes with the usual Big Band seasonal cracker in December (see what I did there…).

A warm welcome, too, to all those visiting performers coming to the Colyer-Fergusson Hall, including Nova Music Ensemble who come in October as part of the Canterbury Festival, bringing contemporary chamber operas by Cecilia McDowall and Stephen McNeff.

There’s plenty to look forward to: check all that’s coming up online here.

Exciting to have had harpsichordist and conductor Trevor Pinnock recording in the Colyer-Fergusson Hall this week. The founder of the English Concert and exponent of works for harpsichord has been in the building to record his forthcoming disc.

We’re delighted that Trevor will be giving a recital here in October, details of which will be published soon when our concert diary goes live online next week – a sure sign that term cannot be far away…