Continuing the series profiling some of this year’s Music Scholars. This week, woodwind specialist, Victoria Lockwood.

From a very early age, music has always been an integral part of my life. Many of my summer holidays were spent in a tent at various folk festivals, watching my Dad perform with his folk bands. More recently I have begun to make guest appearances with them on stage at various venues, including the Cambridge, Sidmouth and Towersey Folk Festivals. I started having lessons on the clarinet in middle school and then also took up the alto saxophone in secondary school.

I played in a variety of music groups throughout my time in middle and secondary school, from the school orchestra, clarinet group and jazz band, to the soul band, choir and chamber choir. This gave me plenty of opportunities to perform and I’d always find myself in more than one item in a single concert!

In 2010 I was persuaded by the head of music to play the school’s baritone saxophone in the school’s jazz band, which I really enjoyed and ended up playing it in several other groups as well. I was then asked to play ‘Reed 4’ along with teachers, students and professional musicians, in the orchestra for the school’s production of ‘West Side Story’. I had to play clarinet, bass clarinet and baritone saxophone, which ended up being a bit of a squeeze when we had to fit everyone in the pit! In 2012 I also played in the orchestra for the school’s production of Oklahoma. Whilst in sixth form I took A level music.

Outside of school I was actively involved with Milton Keynes Music Service for many years, where I played and performed with the Senior Wind Orchestra on 1st/solo clarinet and with Advanced Jazz on baritone saxophone. In the 2011 Gala Concert in Milton Keynes Theatre, I played the solo clarinet part in Gershwin’s Rhapsody in Blue.

I have also participated in the Music Service tours to Lake Garda, Italy, and Paris, France, as part of the Wind Orchestra, Big Band and Choir. I travelled to Ghana in 2011 with a small group of students and teachers from MK Music Service to help teach students at a local music organisation, as well as giving concerts in a range of venues.

I love any opportunity to widen my musical experiences and brought back a Djembe from Ghana and also a Sitar from India, where I went as part of a school cultural exchange. Whilst in Ghana I had the opportunity to work with a local drumming group, which was incredible, but after a while it does feel like your hands are going to fall off!

Back home I play alto and baritone saxophone with a soul/funk band, which has given me a chance to write and arrange the horn parts. We have performed at a range of events, from pub gigs to New Year’s Eve, Birthday and Garden parties.

I’m currently playing clarinet in the UKC Symphony Orchestra, and Sirocco group, and alto saxophone in Concert Band, and Big Band. The musical opportunities at Kent have allowed me to experience a broad range of repertoire and I felt privileged to have performed a piece that had been commissioned especially for Concert Band. I really enjoyed playing in the Gala opening of the Colyer-Fergusson building last term and I am looking forward to the concerts coming up this term.

Read the other profiles in the series here. 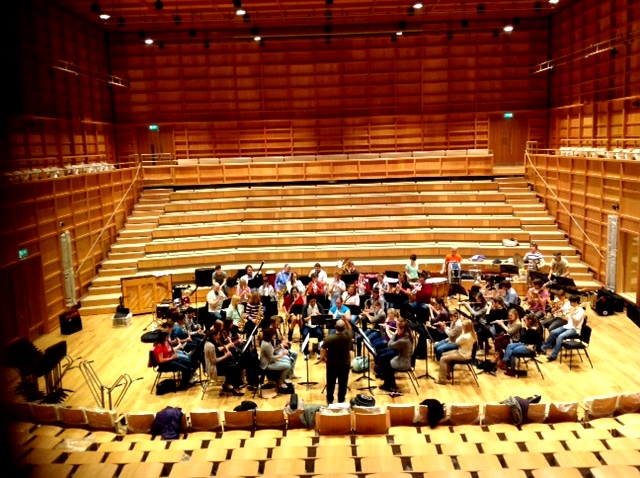 We’ll be keeping a wary eye on the weather-forecast for Thursday 9 June, when Summer Music goes outdoors and onto the University Labyrinth for a free lunchtime concert.

After their sure-footed debut at St Peter’s Church last term, the newly-founded Sirocco Ensemble, conducted by Dan Harding, will perform Gounod’s vivacious Petite Symphonie, whilst the Brass Group will bring a selection of works for assorted-size brass ensemble.

Bring a picnic lunch to the Labyrinth behind Eliot College, and enjoy spectacular views over the city of Canterbury – and even more spectacular music-making!

(Apologies for the dreadful picture-caption pun: I couldn’t help it…)

The spring term concluded with a final flourish last week, with three events in the space of five days. Monday’s evocative lunchtime concert with the Silk and Bamboo Ensemble was followed on Wednesday by an epic charity-raiser at St Edmund’s School with the University Big Band and Concert Band teaming up with the school’s own big band (see previous post).

Continuing the busy period for music at the University, the last concert on the Friday saw the newly-founded University Sirocco Ensemble making its debut with terrific poise; conducted by Deputy Director of Music Dan Harding, staff, students and Music Scholars combined in a deft and delightfully refined performance of Gounod’s Petite Symphonie before an enthusiastic audience at St Peter’s Methodist Church, Canterbury.

The church’s rich acoustics also resounded to the University Chamber Choir, who presented a mixture of sacred and secular pieces, concluding with a touching rendition of Lullabye by Billy Joel, conducted by second-year Drama student and Scholar, Steph Richardson, and a mesmerising performance of Whitacre’s Sleep with Dan Harding.

Our thanks to St Peter’s Methodist Church for the invitation to perform as part of their lunchtime concert series.

An eclectic week, and a fine way to draw down the curtain on all this term’s music-making. Keep an eye on our ‘What’s On’ web-page from mid-April, when there will be details about our celebrating the end of the academic year with our Summer Music events from 6-10 June.

Quietly and steadily rehearsing over the past few months, like a beautiful butterfly emerging from its chrysalis, the newly-founded University Sirocco Ensemble is set to make its debut at the end of this week.

Comprising wind and brass players from amongst the University staff, undergraduate and post-graduate students, the ensemble was founded during the autumn in order to accommodate the wealth of talented members of the University’s musical community. History and Drama students sit next to Anthropology and BioScience lecturers, and we’ve been putting together Gounod’s popular and playful Petite Symphonie.

The nine-piece  Sirocco Ensemble will be giving its inaugural performance in a lunchtime concert on Friday 30 March at 12.30pm at St Peter’s Methodist Church, in Canterbury, where it will share the programme with the University Chamber Choir in what promises to be terrific final musical flourish to the spring term.

The concert is free, with a retiring collection; more details here.

Come and support the newest addition to the University’s music-making at the end of the month.