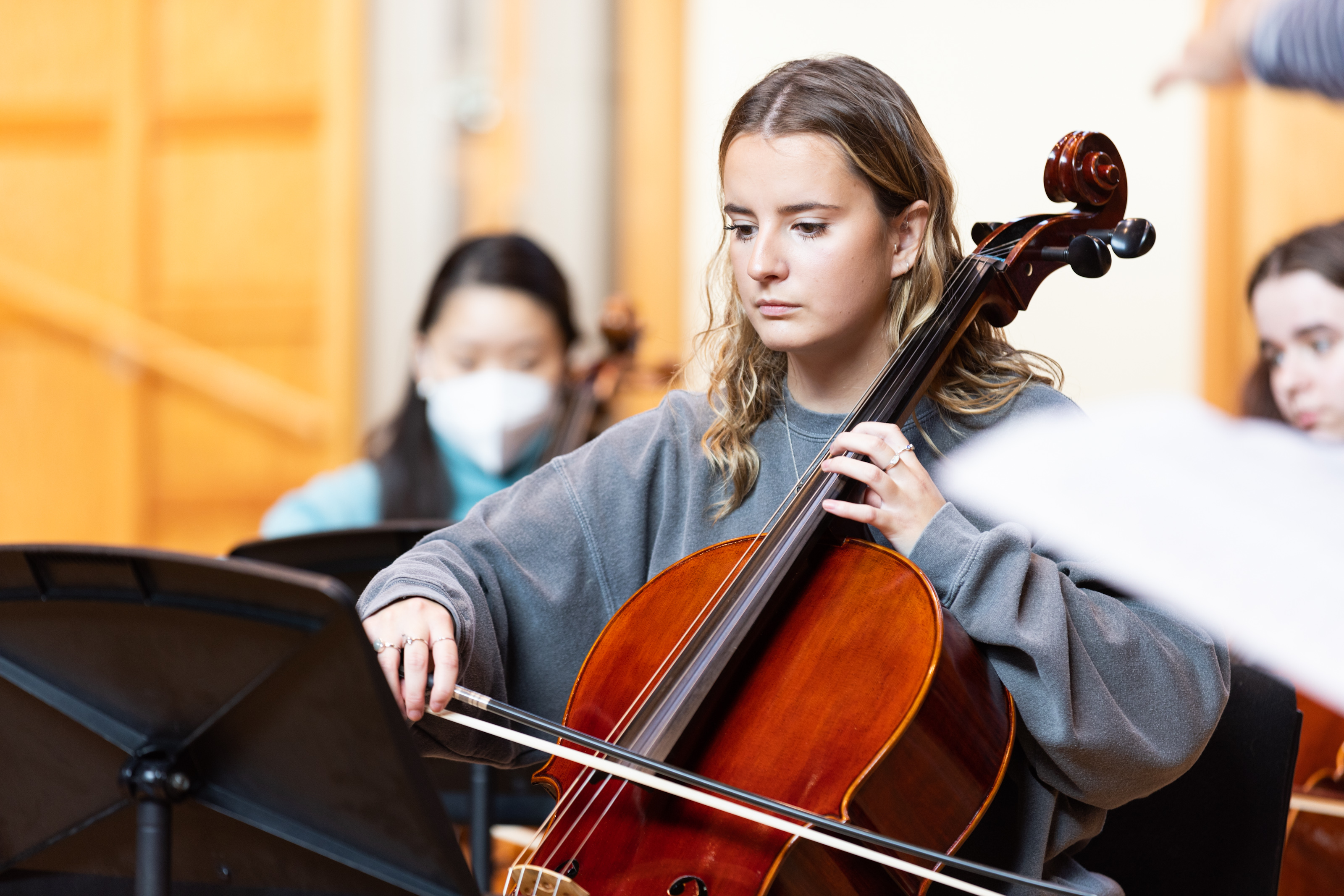 The Music department hosted players from the Glyndebourne Touring Orchestra and Pit Perfect Scheme for an afternoon performance and workshop, before we took a group of student musicians to see the production of La Bohème at the Marlowe that evening. Here, final-year Forensic Science student and cellist, Lois Cocker, looks back on her experience throughout the day. Last Wednesday I had a fun day, full of music, which I was able to be a part of thanks to being part of the University String Sinfonia. The Glyndebourne touring orchestra visited Canterbury and put on a lunchtime concert in the Colyer-Fergusson hall which was incredible to watch. After the concert I was then part of the workshop where some musicians from the orchestra coached the String Sinfonia as part of their Pit Perfect scheme. I play the cello and so was lucky enough to sit next to one of the pro cellists who was so lovely and friendly! The professionals from Glyndebourne gave us great advice which we all took on board and will definitely use in our playing in the future.

After the workshop, some of us went into town to get some pizza before heading out to watch the Glyndebourne opera – La Bohème at the Marlowe Theatre, which we were lucky enough to attend thanks to being treated by the music department here at Kent. This was my second ever opera I had seen. (Last year I was able to see my first ever opera with the String Sinfonia, The Rake’s Progress which was also a Glyndebourne production). La Bohème was such a beautiful opera which I enjoyed so much- it even made me cry! The music from the orchestra was incredible, I almost forgot that it was all being performed live as it was immaculate! I’m so glad I was able to experience this.

Before I had ever watched an opera, I always assumed it wasn’t really my cup of tea, but after now seeing two operas I can’t wait to see more! I was so engrossed watching La Bohème, it was comedic and also emotional. The voices of the opera singers were so beautiful. After the performance we had the opportunity of speaking to some of the musicians again. I was able to learn about their musical upbringings and their musical careers which I found so interesting and inspiring.

All-in-all it was an amazing day and I feel so lucky to have been part of the experience. It’s a massive part of my university experience that I will cherish forever!

With thanks to Chris Stones (Head of Tour Development), Jonathan Tunnell (Tour Orchestra Manager) and all the visiting Glyndebourne staff and players.

Rehearsals are well underway for the performance of Purcell’s Dido and Aeneas by the University Cecilian Choir, String Sinfonia and soloists in two weeks’ time; here are some shots from recent rehearsals, including Music Scholar, soprano Helen Sotillo, rehearsing Dido’s heart-breaking lament, the Cecilian Choir as palace courtiers in Act I, and some of the String Sinfonia rehearsing Act II. The tragic story of the doomed love of the Queen of Carthage for the Trojan prince unfurls in Colyer-Fergusson Hall on Friday 1 February at 7pm; more details online here. 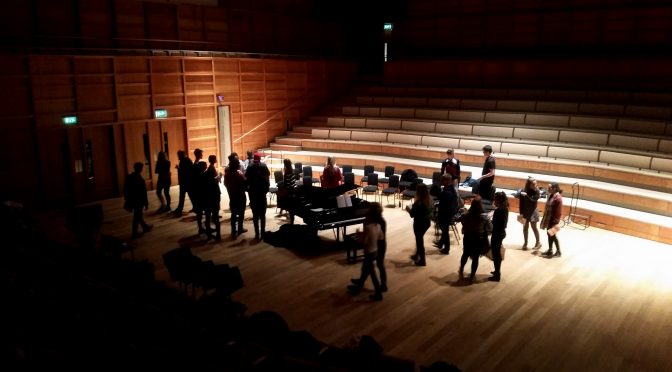 Rehearsals are underway for a performance in February of Purcell’s ground-breaking Dido and Aeneas by the University Cecilian Choir, String Sinfonia and soloists.

Driven by characterful choruses, the Chorus has a significant role to play throughout each of the acts. Whether courtiers to the Queen, a coven of witches or lusty and infidelious sailors, the Choir will have a major part to play in the gradual unfolding of the witches’ nefarious scheming to come between the Queen of Carthage and the Trojan prince…

The Choir has been working hard in rehearsals each week, and is here captured getting into character as palace courtiers for the start of Act I. Soloists in the opera are drawn from the Choir, including third-year Music Scholar, Fleur Sumption and first-year Felicity Bourdillon, seen here in an earlier rehearsal for Acts I and II. Jarman’s Studio 3 Gallery rang to the tempestuous world of love and loss at the opera at lunchtime today, as several of the Music Scholars presented a selection of operatic arias to an enthralled audience.

Elsewhere, Gluck’s Orpheus lamented the passing of Euridice in the rich, warm voice of first-year Ruth Webster; Handel’s Bel Piacere had a joyous conviviality in the hands of third-year Philippa Hardimann; final-year Kathryn Cox soared to the heights with Rusalka’s Song to the Moon; there was a lyrical reading of Mozart’s Deh vieni by third-year Rowena Murrell; and second-year Charley Tench gave an affecting, intimate performance of Dido’s Lament.

Our thanks to Katie McGown and the team at Studio 3 for the invitation to continue the #EarBox series of collaborative events, of which there will be more. Meanwhile, the singers are back on Monday 8 June, the second day of our Summer Music Week, in Colyer-Fergusson Hall; find out more here. 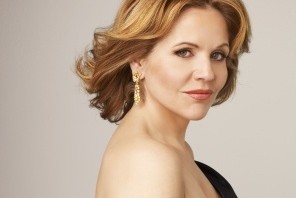 For opera-lovers – the Gulbenkian Theatre is showing live relays from Covent Garden over the next few months. Here’s the stellar Renee Fleming in the famous ‘Letter Scene’ from Eugene Onegin, to whet your appetite.

More details on the Gulbenkian website here, or see the individual links above.

Call me what you will, but I believe there’s an inherent snobbery about how concert audiences are expected to behave.

In the sacred cathedral that has become the Modern Concert Hall, audience members are expected to adopt an almost religious state of silent obeisance before The Music: they must enter the hall with trepidation and awe, with veneration in their hearts, and are expected to listen in a state almost bordering on ecstasy. Not until the end are they permitted to move a muscle, at which point they are then permitted to clap politely – nay,enthusiastically (although not too much of course) – and, if at a jazz gig or a promenade-type concert, they are occasionally allowed to whoop.

Now don’t get me wrong: I understand that listening to music is a deeply personal experience, and I can get as annoyed as anyone by inconsiderate or rude behaviour from someone in the same audience as myself. But if someone has been so moved by a piece that they feel the need to express this, why shouldn’t they ? I have a fantastic live recording of a performance of Walton’s First Symphony by the National Orchestra of Wales at the Albert Hall; for anyone who doesn’t know this piece, the first movement is of such epic proportions (it’s about fifteen minutes long) that it seems like a whole work in itself. It has pounding rhythms, stirring melodies, and a relentless energy that drives the music to a tremendous climax in a fierce final gesture, punctuated by timpani. In the recording, a smattering of enthusiastic applause breaks out spontaneously at the movement’s conclusion amongst some of the audience who just can’t help themselves: the music is so rousing, it just demands a response.

Yet the Apostles of the Sacred Mysteries of the Concert Hall frown upon those who don’t know any better than to actually clap between individual movements, rather than waiting until the piece is finished.  The slight rustling of a programme attracts fierce stares.

But perhaps it’s a cultural thing: after all, the etiquette of modern concert audiences is relatively recent. Until the end of the nineteenth century, audience behaviour was completely different; people went to be seen as much as to see the concert: it was a social occasion at which they talked, ate, and drank during a performance. Modern rules were laid down, according to Alex Ross in The Rest Is Noise, by the composer-conductor Gustav Mahler, who instilled in audiences the ideas of complete, attentive silence and no applause until the end of a piece.

And some semblance of the old culture still survives: Italian opera-goers give standing ovations (or vehement boos) after a particular singer has given a great (or disastrous) rendition of an aria. In the middle of an opera. It’s an accepted, even expected, part of the performance experience. Conductors will pause at the end of arias where they know this will happen, even if the music is supposed to carry straight on. The audience are expected to voice their reaction during a piece.

As long as their response isn’t disruptive, I don’t mind if someone is so moved by their experience that they applaud between movements. People go to concerts to be moved, to be emotionally engaged.

How do you think audiences should behave ?

I read the news that the BBC is launching a new series across its major networks devoted to opera with some trepidation. Not because opera is not perhaps my favourite art-form, hem hem. I welcome any cultural exploration on the television – I’m currently watching Francesco’s Venice with great enthusiasm, as well as Owen Sheers’ Art of the Sea – and classical music, for my money, is often poorly over-looked by television outside of the BBC  Prom season.

But as I read the article in Gramophone, my heart sank.  As part of the season exploring opera, Rick Stein will be offering a “look at the parallels between food and cooking, with a gastronomic look at Italian opera,” I learn. And the titanic, sprawling controversy that is the music of Richard Wagner will be investigated by – Stephen Fry.

Now don’t get me wrong: I love Stephen Fry. But if I want an analysis of Wagner’s music, an examination of his mammoth operas and an insight into the innovations he wrought in harmony and tonality, I might not look to Stephen Fry straight away. Nor do I expect profound insights into the Italian opera tradition to be revealed by focusing on cooking with Rick Stein.

I like the idea that classical music, even opera, is the subject of a season of programmes: hell, I might even learn to like opera myself. But if ‘twere done, then ‘twere best done properly, by specialists who really know their stuff. The promised programmes by Antonio Pappano, investigating the role of opera in the musical life of the country, sounds excellent. But the nation-wide search by Radio 3 for the nation’s favourite operatic aria fills me with dread: presenter Rob Cowan talking of ”an exciting battle for the top spot” when the top ten are announced in June.

I’ll be watching, and listening, with interest. But a little trepidation too. Will you ?