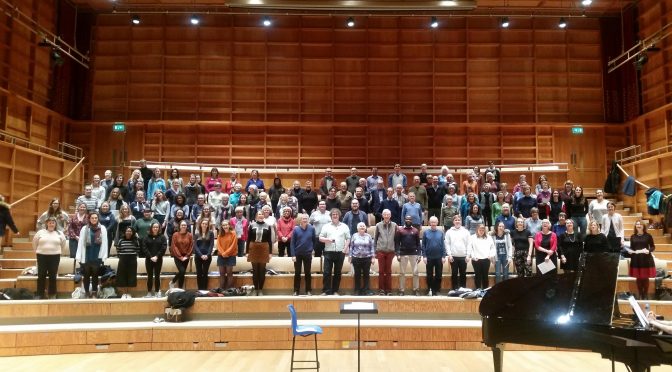 The University Chorus is busy rehearsing works by Vivaldi and Handel each Monday evening, in preparation for the  annual December concert. As part of the programme, the Chorus will perform Vivaldi’s fiercely committed Magnificat, rich in dissonance and expressive chromaticism, as well as two of Handel’s Coronation Anthems, for which they will be joined by the Symphony Orchestra. Undergraduate and postgraduate students sit alongside University academic and administrative staff, senior management and members of the local community, all bringing Vivaldi’s dramatic work and Handel’s buoyant Zadok the Priest off the page

The group has been working hard throughout the term; there’s not long to go until the performance next week – come and hear the results for yourself on Saturday 8 December…

The Cecilian Choir and Sinfonia rose to the occasion in splendid fashion last Friday, and delivered a scintillating concert full of festive Baroque favourites to launch Christmas music-making from the Music department. Excerpts from Part One of Handel’s Messiah were combined with instrumental concerti by Vivaldi, with four out of the five soloists being drawn from the School of BioSciences – second-year oboist and National Youth Orchestra member Jonathan Butten, second-year singing Scholarship students Charlotte Webb and Ruth Webster, and Senior Lecturer in BioSciences, oboist Dan Lloyd. Vivaldi’s Double Oboe Concerto had a crisp vigour, and Elina Hakanen‘s performance of Winter with the Sinfonia combined moments of drama with expressive lyricism in a sure-footed and musically articulate performance.

The Cecilian Choir were in rousing form in the Handel choruses, aided by the Sinfonia, directed from the department’s new harpsichord by Your Loyal Correspondent, and the enthusiastic audience even rose to its feet for the concluding ‘Hallelujah Chorus.’

Bravo to everyone involved; the festivities continue this Saturday as the Symphony Orchestra and Chorus come together in music by Vaughan Williams, Shostakovich and Sibelius – details here. An electrifying performance of the Bach Double Violin Concerto from Alexandra Reid and Kathy Shave and the musicians of CantiaQuorum was the centrepiece of a concert bursting with energy on Friday.

A rapturous ovation from an enthralled audience greeted an agile reading of Bach’s concerto that bristled with vigour – the enthusiasm shared between the soloists was reflected by the ensemble as a whole. The evening opened with Handel’s Silete Venti, conducted by Alex Caldon, with Susanna Hurrell’s bright, spinning soprano a perfect foil for the supremely accomplished Ilid Jones on oboe; the performance deftly captured the wide range of both the drama and the melodic grace of the piece, delivered with stylish aplomb. The second half alternated movements of Telemann’s Tafelmusik with Cage’s Living Room Music; gathered around a dining-table, various members of the ensemble took turns to wield chopsticks, cutlery and even children’s toys to realise Cage’s exploitation of household objects, at one point updating it to deploy iPhones and an iPad to reflect the twenty-first century – an energy-drive reading of a different kind. A fantastic evening, with an ensemble of professional players in tip-top form.

Ahead of CantiaQuorum‘s concert next week, listen to Handel’s Silete Venti which will appear in the ensemble’s programme next Friday. The wonderfully bustling fugato opening, depicting the wind scurrying through the branches, is interrupted at two and a half minutes into the opening sinfonia by the soprano, as she bids them ‘be silent.’

Just before the six-minute mark, the wonderful aria Dulcis amor shows Handel in sublime melodic form, as does Date serta, date flores (Give garlands, give flowers), starting at 13′ 09”, which later becomes dramatic and highy flamboyant for both soloist and ensemble alike, before the piece concludes with a sprightly Alleluia.

Soprano Susanna Hurrell (currently to be heard in the Royal Opera’s production of L’Ormindo) will be the soloist with CantiaQuorum next week; it promises to be wonderful opportunity to hear this astonishing piece performed live. Tickets and details here.

Several of the University’s singing Music Scholars had the opportunity to learn from one of the country’s leading singers last week, in a masterclass with Dame Anne Evans.

Dame Anne put several singers through their paces, in arias by Mozart and Handel and a piece by Cole Porter, sharing tricks of the trade in front of the audience in the Colyer-Fergusson Hall; as she said, later that evening when appearing In Conversation, ”If you can sing Mozart, you can sing anything.”

Later on, she talked about her career on the national and international stage, looking in particular at her performances at Bayreuth under the baton of Daniel Barenboim, taking the audience from her first professional engagements through the various stages of her career, accompanied by some extremely rare recordings and footage of her in the role of Brunnhilde in scenes from Götterdämmerung.

When asked what her secret was to preparing herself before performances of the epic Wagnerian role, she answered candidly: ”A large bowl of pasta two hours before the performance, and bananas in the interval.” Asked about advice for young singers starting out: ”Start with Mozart,” and ”In auditions, always sing pieces that you are really comfortable with.”

It’s been a busy week with All Things Choral – the University Chorus continues its exploration of Orff and Handel, the Chamber Choir engages with Tavener and Finzi, and the first rehearsal for this year’s Cecilian Choir sees them getting to grips with Britten’s Ceremony of Carols.

And cake and biscuits…

Confused ? Check out all that’s been happening on the choral blog, Cantus Firmus, where you can listen to some of the pieces and see photos of cake. And biscuits too… Tonight, we’ll be getting to grips with Handel’s Coronation Anthem The King Shall Rejoice and Orff’s riotous Carmina Burana with the Chorus – both pieces will feature in the Grand Gala concert which will officially launch the new music building at the inaugural concert in December (details online here).

7.30pm this evening, Grimond Lecture Theatre II; open to staff and students of the University without audition, and auditioned external members as usual – see you then!

And to whet your appetites, here’s Seiji Ozawa and the Berlin Philharmonic in a performance from 1989…

N.B. For those interested in Sing! – it starts on Thursday, Rutherford Music Room, 6pm. Be there…