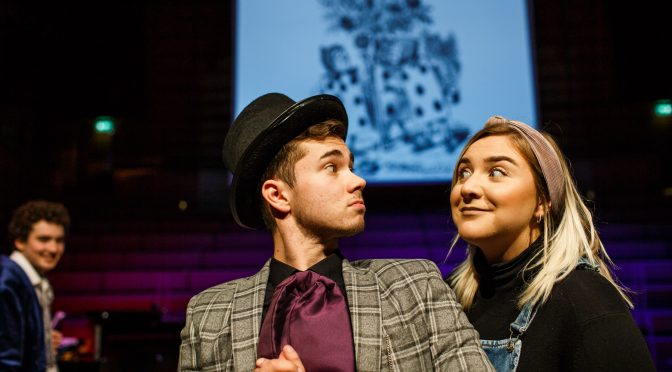 As part of the build-up to this Friday’s performance of Alice in Wonderland: A Musical Dream Play by the University Music department, we’re pleased to present a series of films each day this week of some of the Nonsense Songs, written by Liz Lehmann and published in 1908, that will be performed at the event.

The suite of characterful and charming songs takes its text from the nonsense rhymes that appear in the book – including How doth the little crocodile, You are old, Father William, and Will you walk a little faster – and creates a series of pieces for variously a quartet of voices, solos and duets. The songs will be performed live on the foyer-stage in Colyer-Fergusson by a quartet drawn from the principal cast, who will sing as part of the Hatter’s Tea Party which takes place immediately before the performance.

The first song – How doth the little crocodile – is here performed by Will Clothier (baritone), Maddie Jones (soprano), and two University Music Award Holders, Matthew Cooke (tenor) and Sophia Lyons (soprano). The rest of the songs will be released daily on YouTube over the course of this week, building nicely up to Friday’s performance of the Dream Play.

Tuesday: the second song, a duet of You are old, Father William, featuring baritone Will Clothier and tenor Matthew Cooke.

and the quartet sings Will you walk a little faster said the whiting to the snail:

Thursday: The Queen of Hearts, she made some tarts sung by third-year soprano, Sophia Lyons:

And the final song from the cycle features the whole quartet in the heart-breakingly beautiful Epilogue.

Details and tickets for Alice in Wonderland: a Musical Dream Play can be found online here. Watch all songs as they are released on a dedicated YouTube playlist throughout the week here.