University Music Performance Scholar Hannah Ost is currently working in New York at the French Woods Festival  for the Performing Arts as part of Camp America. Alongside her busy schedule, she’s keeping a festival diary for the rest of us to enjoy: here’s the first instalment… 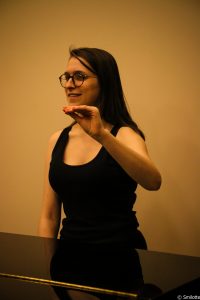 It’s been almost a month since I landed in the US so I thought I would update you on what I have been doing at French Woods Festival here in New York!

In the morning, I teach voice lessons to whoever wants to sign up. I have had as little as two students in two hours and as many as nine (which was a crazy day!)

After lunch, I am the Assistant Musical Director for two shows: James and the Giant Peach and a rewrite of Snow White which I have helped rewrite some music for. I mainly teach the solo numbers, while the Primary MD teaches ensemble songs. I’ll be playing the Keys 2 part in the pit band for the first.

I have also been given my assignment for the next session, which begins next week. I’m going to be the Primary Musical Director for a show called Junie B Jones and I’ll be playing Keys 1 and conducting the pit band for that show too!