St Edmund’s School Hall was packed out last week for the annual music extravaganza that is Big Bands 3, masterminded and conducted by Ian Swatman. The evening began with the massed ranks of the University’s Concert Band, playing a selection of this year’s repertoire including a selection for ‘Wicked’. Equally wicked was the impressive playing of the St Edmund’s Big Band which brought the first half to a bewitching close!

Refreshed by a glass (or two) of wine, the audience was then treated to the sensational sounds of the University’s Big Band, featuring student vocalist, Ruby Mutlow, and guest appearances from two St Edmund’s pupils, Alex Gibson and Tom Lowen. The concert then came to an ear-splitting, foot tapping climax as School and University Bands combined for one final number, Zoot Suit Riot.’

The concert was in aid of the Jacob Barnes Scholarship Trust, and a staggering £1,600 was raised! So many thanks to everyone for their generosity and to Ian, Will Bersey, Carol Hawkins and all the St Edmund’s team for making the concert such a success! 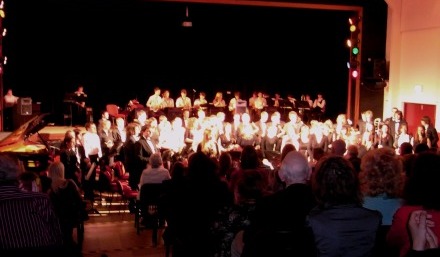