The curtain has sadly fallen for the last time on this year’s production by the Music Theatre Society, and their assured performance of Sondheim’s Into the Woods that never puts a foot wrong. A strong cast and crew combined to give a professional production that at times transcended the auditorium and swept the audience beyond the theatre into the dark moral territory of Sondheim’s show in overwhelming fashion. 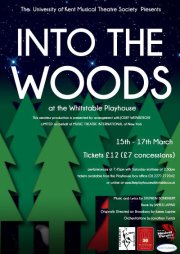 As Cinderella, Cheryl Ahmet demonstrated a refined, clear tone, and sang ‘No-one Is Alone’ in particular with a touching simplicity that was deeply moving.

Tenor Richard Simpson as the Baker projected great stage presence, and showed he had a clear insight into the musicality of his arias; he sang with considerable nuance to phrasing, and there’s a fine voice there as well. His delivery of ‘No More’ was full of subtlety and emotion, and held the attention of a rapt audience. Jenni Stewart played Little Red Riding Hood’s impudent childishness to perfection, and her face-muscles must have been working overtime as she portrayed the full range of impish expressions of the ever-snacking child.

The two princes were in very jolly form – the line ‘I was raised to be charming, not sincere’ was greeted with an appreciative and spontaneous round of applause.

Star of the show, however, has to have been scene-stealing Lucie Nash who, as the Baker’s Wife, was in inspired form as she painted the full spectrum of her character’s emotional range; moving from heart-rending desire for a child to puckish swagger and sultry seductress with the Prince, her comic timing in particular was immaculate, and the on-stage rapport with Richard Simpson as the Baker had a genuine warmth.  Moving around the stage with an ease that radiated confidence, her ‘Moments in the Woods’ aria was especially beautifully crafted, and sensitive to the nuances in the score.

The orchestra and singers were held together well by the efficient direction of conductor Adam Abo Henriksen.

All in all, this is a triumphant achievement for director and this year’s society President, Lisa Crowhurst. The overall integrity of her sure-footed directorial vision was alive to the sophistication of both Sondheim’s music and text, and its clarity allowed a natural ebb and flow to the narrative drama in a manner which allowed the nuances of the players and the changing emotional and moral relationships between the characters to stand clear.

By the time you read this, the run will have come to its end and the woods will have been cleared; but the entire company can look back on three days of terrific accomplishment in the seaside playhouse.  A triumphant achivement for the cast, crew and Society: bravo.

3 thoughts on “Out of the Woods to touch the stars: triumphant success for Music Theatre Society”