Ronnie Scott: “If it doesn’t turn you on…”

On Sunday 16th May, as part of the Sounds New festival, Ronnie Scott’s Big Band came to the Gulbenkian Theatre. But as an extra special treat, selected musicians from Canterbury Christ Church University were invited to an afternoon workshop with the director of the band, Pete Long. I was lucky enough to sit in and watch the experience! Pete Long is a fantastically extrovert character who clearly has a passion for all things jazz and big band. He was also a brilliant director, getting the absolute best out of everyone within minutes. The noise that engulfed the Gulbenkian Cafe was astounding. We also got a little insight into how rehearsals with the Ronnie Scott band must be as everyone was so relaxed and having a great time just enjoying the music. I also feel greatly enlightened by Pete Long’s words of wisdom during the day. A lesson every musician must learn is this; “Playing a note is like streaking, once you’ve started you’ve got to commit to it!” Also I think it is important we remember the day in a certain context; “Big band music – sometimes it’s used to accompany strippers.”

So as the afternoon drew to a close everyone was eagerly awaiting the evening performance of the two iconic jazz albums: Atomic Mr. Basie and Ellington at Newport. The evening was not only fantastic music but I felt I left knowing a lot more about the two albums and the artists as Pete Long gave each song an introduction and history (not to mention a joke or two). It was great to hear the songs performed by the band that the students had played about with earlier in the day, as you could appreciate just how good both the students and Pete Long were at bringing the music to life. Almost every member of the Ronnie Scott band had a solo opportunity during the evening, the crowd favourite being the drummer who not only stunned us with drumming but juggling as well! A quirck which put a smile on my face was watching the pianist’s feet tapping away at an incredible speed along with all the songs, I was worried he might fall off his chair.

The evening went from strength to strength and towards the end of the night every song and every solo received a cheer and a standing ovation. The passion for the music in the room was evident, even if jazz wasn’t your thing! But as Pete Long said; “If it doesn’t turn you on…then you haven’t got a switch.”

So, the Jazz @ 5 season has drawn to a close. Now into its second year, the regular Wednesday showcase for jazz-loving Scholars, staff and students has really found its dancing feet. Set up by Dan Harding when he started in 2008 as a foil for the large-scale music-making of the University Big Band (as well as a chance to indulge in his passion for small-scale jazz ensemble-playing), the series has flourished since taking its first tentative steps in October 2008 onto the Gulbenkian Theatre foyer stage.

The series this year has featured a dizzying array of singers from the ranks of staff and students alike: Jo Turner, Jo Pearsall, Sophie Meikle, Miriam Zekagh, Dina Watten (pictured), Amy Clarke, Crystal Cowban, Lizzie McIver, Alanya Holder: all have graced the stage. Even former Scholar and jazz pianist Chris Manley has hot-footed it up the hill from Canterbury after work in order to continue playing in the series. Music this year has ranged from Fairground Attraction to Radiohead, as well as the usual array of popular standards and show-tunes.

The original ensemble has grown to feature a regular quintet: pianist and leader Dan Harding, the elastic improvisations of guitarist Andrew Kitchin (pictured), the robust solos of saxophonist Will Rathbone – now enhanced by the arrival of some solid bass-playing from Sophie Meikle and the rhythmic underpinning of drummer Jon Nicholls.

And these groups are like buses: you wait for one, and then two arrive at once. This year has seen the birth of the JA Cross Quartet: Scholarship pianist James Cross and drummer Mike Macdonald have teamed up with Andrew and Will to form a refreshingly exploratory group, embracing Monk and Coltrane in their sound.

Many thanks to everyone who has participated this year and made it such a success. As mentioned in a previous post, we were even blogged about by LondonJazz blogspot: it doesn’t get much better than that! Well, maybe Downbeat magazine, perhaps…

We also present an album of images from Jazz @ 5, courtesy of the creative photography of Mick Norman. Some of the performers will be appearing in the Marlowe Tent at ArtsFest on Saturday 12 June: details to follow.

The lights on-stage have faded, the piano is closed, the microphone stands alone. The singers sang, and set the sun. For now…

The Chorus piece for this year’s ArtsFest Prom is nearly finished.

With the arrangement for Chamber Choir now all but completed, I was left with no displacement-activity excuse to avoid getting to grips with what has turned out to be something of a monster. There’ll even be an array of Latin percussion as well, if I can organise it.

Herewith a sneak preview of the first few pages: if you’re singing with the Chorus in the Prom concert, this is a little taste of what you’re letting yourself in for… 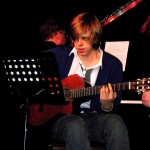 I”m delighted to announce that the most recent Jazz @ 5 has been reviewed on the LondonJazz blog, one of the top ten London blogs and a mecca for jazz-enthusiasts.

Run by Sebastian Scotney, the jazz critic for the Daily Telegraph, the review is penned by Adam Tait, and highlights the nature of what Jazz @ 5 is really all about. Click here to read the review.

Congratulations to everyone who has helped make Jazz @ 5 a success again this year: bring on the next one!

What is it about jazz that attracts listeners so much ? What is the eternal appeal of jazz music ? Is it it the subversiveness, the way jazz undermines so-called ‘rules’ of classical music of related keys, permitted harmonies, ‘blue’ notes;’ its creativity, its reliance on spontaneous composition at the moment of improvisation; its rhythmic drive ? Or something of all of these ?

For me, the great allure of jazz is its constant hunger for new things: like a fire, jazz is forever consuming other forms in its path in its endless quest to re-invent itself.

As jazz moved out of the Swing era into Bebop, it began to develop more advanced melodic, harmonic and rhythmic principles. An apocryphal legend has it that jazz musicians deliberately created more rhythmically and melodically complicated pieces to stop random amateurs being able to sit in on their sets and churn out the same old array of standards and popular tunes that were becoming dull.  Out came the effortless lyrical invention of Charlie Parker, the fierce muted trumpet tones of Dizzy Gillespie, both of them working through the rapid chord changes in each bar with supreme skill.

Never content to sit and contemplate its own achievements, jazz promptly reacted against its own complexity in Bebop and stepped back to Cool, a return to modality and simplicity in both melody and harmony. Kind of Blue stands as a laid-back testimony to the new austerity in jazz; So What features very few chords, a skeletal introduction from Bill Evans on the piano; jazz cocks its hat over its eyes and sits back with a cigarette dangling from its lips.

Jazz has always been open to embracing new technologies; think of the electric keyboards in the 1960’s with Herbie Hancock (who first played electric keyboard on the Davis album Filles de Kilimanjaro), or the wah-wah pedals and amplification effects in the 1970’s with British trumpeter Ian Carr’s ‘Nucleus,’ or the sampling keyboards in the 1980’s with Hancock and Joe Zawinul. Jazz looked at the lifestyle of rock music in the 60’s and decided it wanted some of the action that was being handed out to Sly and the Family Stone and Jimi Hendrix; jazz’s infatuation with the glamour and popularity of rock musicians (not to mention the large fees rock musicians could command) led eventually to the cultural epiphany in the famous Isle of Wight festival, where both Hendrix and Davis played (though alas not together), immortalised in Murray Lerner’s film ‘Miles Electric: A Different Kind of Blue.’

Jazz has also been willing to embracing new musical cultures: Indian music in the 70’s with the dizzying technical displays of John Mclaughlin’s Mahavishnu Orchestra or the more thoughtful Indo-Jazz fusion of Joe Meyer and John Harriott; or African harmonies and rhythms in Coltrane’s solo career; Brazilian and Spanish influences in the music of Chick Corea’s fusion band Return to Forever.

Then there’s the hard-nosed funk-rock and jungle-infused music of one-time Miles Davis guitarist, John Scofield, or the experiments with hip-hop beats and DJ’s on decks in the music of Courtney Pine or (more latterly) Norwegian trumpeter Nils Petter Molvaer. Reactionaries like Wynton Marsalis may preach the supremacy of swing – and swing in a variety of time-signatures, sure, but it’s still swing – but jazz will always hunger for new elements, for the cyclical rhythms of Indian ragas or the polyrhythms of African drumming. (In Marsalis’ defence, though, he’s technically untouchable  and swings like a demon.)

Like a slippery eel, just when you think you’ve grasped jazz, it scoots away from you and goes somewhere you hadn’t expected. Pronounced dead or locked in a dead-end by an endless succession of worthy critics for many years, jazz will still always forge a new dynamic, a different and exciting path.

Come to the next Jazz @ 5 in the Gulbenkian Foyer on Wednesday March 25th and hear some of these elements for yourself.

So What is there, if anything, that appeals to you about jazz ?