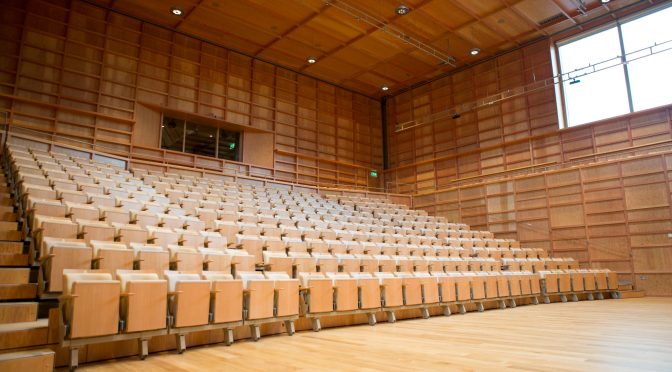 In the current climate of getting your cultural fix online – music, theatre, dance – I’ve found myself, like many, watching pre-recorded and streamed live performances of musicians and actors from around the world. I’ve written elsewhere of witnessing the courage of cellist and composer Anne Müller’s livestreamed Wohnzimmerkonzert (pictured below); I’ve also watched the troubling Frankenstein from the National Theatre, Alan Bennett’s The Madness of George III from the Nottingham Playhouse, and last night’s broadcast of Samuel Barber’s Vanessa from Glyndebourne, a compelling blend of Erwartung, Bluebeard’s Castle and the more menacing waltzes of Ravel.

The experience has afforded the bizarre sensation sometimes of watching on my own, yet being a part of a pre-recorded audience; a strange combination of being part of a community (especially a community watching online at the same time) whilst also sitting by myself in the lounge – a global audience of one. I’ve also, as with Anne Müller’s concert, found myself similarly sat on my own, watching a live performance with no audience present – the only listeners were (presumably) all the others watching live at the same time. There’s no sense of connection on these occasions with other listeners, other watchers. Live performance is charged with the shared experience of being part of the audience; in fact, it thrives on it. That electricity which springs from the performers and reaches out to fill the auditorium, uniting performers and audience in that one-time-only sense of experiencing (hopefully) something magical, shared with people you’ve never met, but who are part of the same experience as you.

This is the conundrum generated by livestreaming and online cultural consumption; sometimes you’re part of an audience at an event you never attended, and sometimes you know you’re part of an invisible online audience, but it’s one from which you get no sense of shared experience, no signals, no communal atmosphere. It’s a little like the experience of art galleries which Alan Bennett talks about in his lecture ‘Going to the Pictures,’ given as a Trustee of the National Gallery;

Looking at pictures is an odd mixture of the public and the private. It is public but it is not communal, as, say, the theatre is…though the setting is public, the experience is private; other people do not contribute to it as they do in the theatre or the cinema.

To which I would add ‘or the concert-hall.’ Watching streamed events is a communal but not a public experience, exactly like visiting a gallery as Bennett describes.

These strange lines of digital and authoritarian connectivity (we are all bound by wifi and government strictures) bring us together as well as keep us apart; they reshape the scale of the world and our current experience of it. The world is close, yet closed to us. We are a part of it, yet apart from it, by order. We experience online concerts and theatre amongst an audience of which we were never part, and yet as part of an online audience that we can never see. In isolation, we are suddenly able to visit concert-halls in Germany and Denmark, opera houses in London and New York, playhouses in Nottingham. (Under lockdown, ironically, I’ve never been so well travelled.) We are offered astonishing, moving experiences that remind us of our humanity during a time when we are cut off from it.

And whilst this is all exciting, fascinating, confusingly contradictory, it should also remind us that it’s in the live, public experience – in the universal truths that we share in music, in theatre, in art galleries – that we can truly be – marvellously, challengingly, brilliantly – alive.

The title of this piece comes from ‘the smoke-stained ceiling… seemed to rewrite the dimensions of the world,’ from Justin Cronin’s The City of Mirrors, a novel about a world in the grip of a pandemic, published by Orion in 2016.