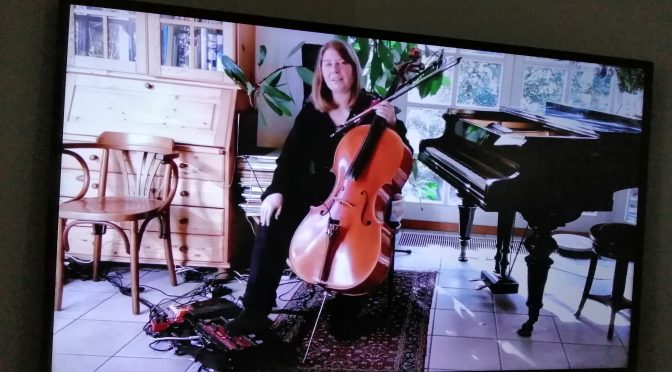 In an era when musicians (and in fact artists generally) are adapting to the current climate by presenting and performing online, I had the fortune recently to watch a streamed Wohnzimmer performance by cellist, composer and music-and-electronics exponent, Anne Müller.

Part of the eclectic Erased Tapes stables (housing such luminaries as Nils Frahm, the edgy electronica of Hatis Noit and others), Müller’s bewitching, quasi-minimalist soundworld, rich in sampled loops and circling motifs, was one I first came across thanks to’ Drifting Circles,’ a mesmerising, pulsating soundscape that seemed to combine David Darling or Eberhard Weber with the pulse-driven music of Steve Reich. Heliopause, released earlier this year and from which the piece comes, ranges freely over wide musical landscapes; from the murky, restless urgency of ‘Being Anne,’ the light-footed, lyrical melancholy of a modernised Bach partita in ‘Solo ? Repeat!’ and the contemplative yearning of ‘Nummer 2,’ closing with the galactic grandeur of the album’s title-track (listen on Spotify here).

Her livestream concert had me both entranced and panicking in equal measure. For anyone who has performed either with electronics or over livestream (or both), the multitudinous pitfalls were further enlarged by her moving between cello and piano – I found myself yelling ‘Don’t drop it – don’t drop it! Watch where you PUT it down!’ inside my head the first few times, testament more to my own anxieties than anything else. I needn’t have worried; there were no accidents, of course. What struck me most about the event was the sheer courage that Müller – and other performers who similarly engage with audiences over social media and streaming platforms – demonstrated. The willingness to put themselves on the line, online, in order to continue to perform for audiences is one of the few marvels of the corona-age. And for all the effortless, evocative playing, beautifully expressive and bang-on in tune, you could see that she was actually working extremely hard. It’s easy to forget, hearing seamless playing from someone’s living-room, the amount of hard work and fierce concentration going on underneath, for all the apparently comfortable nature of performing from home.

As anyone who has attempted to livestream a performance or event from their home will know, it’s fraught with uncertainties. No broadcast from my music room is ever complete with my issuing a Cease and Desist order to the entire family’s online activities for the duration, and charging around the house five minutes before the start yelling ‘And PLEASE don’t close ANY doors between me and the ROUTER!’ The quality of a product or service, as we all know, is communicated by the professionalism of its video presence; at a time when many organisations and performers are throwing content online for free (a thorny issue in itself), it’s often important that the result is of good quality. Yet if we don’t do it, do we have a presence in the current online culture ? Is it worth risking the compromising of quality in order at least to have an online presence, to reach audiences and to generate revenue ? Where you do strike the balance ?

The home-made nature of artistic creation and broadcasting appeals to me at the moment, a sort of digital revisiting of Victorian parlour-music-making, that era of cosy domestic entertainment. Quarantine has turned many of us into performer-broadcasters, and I don’t mind the occasional bit of shonky camera-work (thanks to conductor and bird-watching enthusiast, Lev Parikian, whose marvellous Twitter feed introduced me to this colourful adjective) if it allows the opportunity to keep watching, keep listening and, in the case of Muller’s streamed performance, be able to watch events by performers I haven’t seen before – a rare instance of quarantine actually facilitating the performance-watching experience.

So it’s the element of domestic risk that makes performances like Müller’s so fascinating. It’s not the risk being taken in a purpose-built concert venue, with suitable acoustics and technicians and tuners; it’s risks being taken right from the personal, private arena of the living-room, armed with a mobile-phone, a laptop, an unpredictable internet signal, and the desire to embrace these new challenges as a means of continuing to bring the arts to audiences.

Different risks for the new normal – it’s where we are now.