Our next lunchtime concert on Weds 11 March sees trombonist Geoff Mason bring his quintet to Colyer-Fergusson for what promises to be a mouth-watering gig.

A regular with the Ronnie Scott’s Big Band, Geoff Mason is widely regarded as the leading exponent of ‘Blue Note Era’ jazz in the UK, named for legendary sound engineer Ruby van Gelder’s recordings by players such as Lee Konitz, Dexter Gordon, Freddie Hubbard and Cannonball Adderley during the 1950s and 60s. 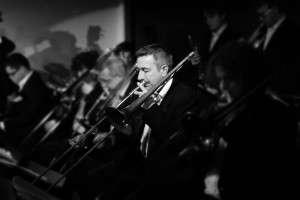 The quintet line-up reads like a veritable ‘Who’s Who’ of British jazz, and includes drummer Trevor Tomkins, saxophonist Simon Spillett and pianist John Horler. I remember hearing a gig with John Horler and guitarist John Etherbridge broadcast on Radio 3 a few years ago that was mesmerising.

The programme promises a blend of jazz standards and bebop tunes, and will surely be a highlight of the year; the concert starts at 1.10pm, admission is free with a retiring donation.

Here’s a classic of the Blue Note sound: Cannonball Adderley as front-man to a group including Miles Davis, in ‘Love for Sale’ from the 1958 classic, Somethin’ Else. (Just look at that line-up…)