We’re delighted to announce that the Colyer-Fergusson Music Building has been shortlisted for a 2013 Canterbury Cultural Award.

This nomination, in the Cultural Landscape category, comes less than two weeks after it was shortlisted for the 2013 RIBA (Royal Institution of British Architects) Southeast Regional Awards.

The Canterbury Culture Awards were launched in 2011 to recognise the value of cultural activity as a vehicle to stimulate economic growth, and to acknowledge and thank those who have made a significant contribution to the cultural life of the city. The Cultural Landscape Award is for a cultural organisation, group or individual making a significant positive impact to the district’s environment, architecture or public space. 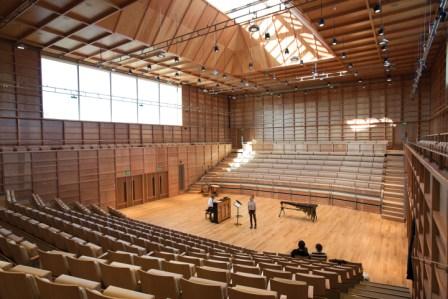 Designed by Tim Ronalds Architects, our music building and its facilities have revolutionised the University’s extra-curricular musical provision, and helped the musical life of the University rise to new levels, with students, staff and members of the local community combining to make music in this exceptional space.

The winners will be announced at an awards ceremony on Thursday 20 June. Fingers crossed. Again…