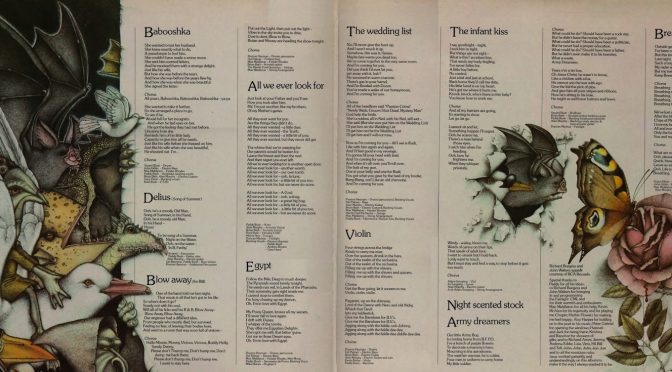 A new album has got me excited. Admittedly, it’s a new album of old stuff, but even so. The old stuff in question is about forty years old, and can be found on Wondrous Stories, a new compilation of the best of Progressive Rock.

Most people I know hate prog rock: a former colleague of mine called it ‘pomp rock,’ and was infuriated with its self-indulgent self-belief and over-blown self-importance (features encountered in classical music too, I countered: think of Wagner…).

Prog rock was about exploration: extending the structure of songs beyond the three-minute wonder of the traditional pop song; extending the textural soundscapes using electronics,  singing about bizarre, elliptical subjects, and often incorporating elements of improvisation from jazz. The swirling synthesiser sounds of Rick Wakeman and the melodramatic Mellotron in the hands of Tony Banks (think of the opening of ‘Watcher of the Skies’ from Foxtrot, where the whole album seems to appear out the fog); and rhythmic trickery (see the opening of BBC 4’s marvellous ‘Prog Rock Britannia’ for a vocal rendition of some of the movement’s famous rhythms): all these elements contributed to drive rock to new dimensions.

Prog rock also embraced instruments not usually associated with pop, such as the violin and the flute, and live experiences often included heightened theatricality aided by bizarre costumes (think of Gabriel’s flower-costume for ‘Return of the Giant Hogweed’ or the face-painted fire-dancing of Arthur Brown).

The wonderfully tactile nature of gate-fold LPs gave full reign to the imaginary invention of prog rock albums, with fantastic imagery and the often incomprehensible lyrics of the quasi-erudite subject matter adorning the inner covers. Artist Roger Dean’s dream-like escapist album art for the group Yes revelled in the panaromic possibilities the gate-fold album offered, a visual feast sadly diminished with the arrival of CDs and all but lost with the mp3-download culture.

Admittedly, prog rock threw up some turkeys: Rick Wakeman’s Journey to the Centre of the Earth recorded live at the Royal Albert Hall is so dreadfully awful that it put me off going any further in my Wakeman exploration of discovery, which is good because I enjoyed The Six Wives of Henry VIII and Criminal Record without the horror, so I’m informed, of The Myths and Legends of King Arthur on Ice that still awaits me.

Closer to home, Canterbury also had a foothold in the prog rock movement, with the Canterbury Scene including bands such as Soft Machine, Matching Mole, Steve Hillage and Hatfield and the North. Hillage’s music may often be just the product of guitar-loop trickery, delay and repetition (as in ’Meditation of the Snake’ from Fish Rising and ‘Ether Ships’ from Green), but I like the cascading textures;  whilst his Rainbow Dome Musik (1979) anticipates some of the New Age music’s ambient sonic soundscapes.

Yes, prog rock sometimes was hideously self-indulgent, often took itself far too seriously, and had an inflated view of its own importance. But it also yielded some classic albums, and allowed pop music to spread its wings beyond traditional structures, liberating it from the confines of the three-minute cage to envisage new landscapes and new musical textures.

It’s no good: I’m going to have to get this album. Amazon, here I come…