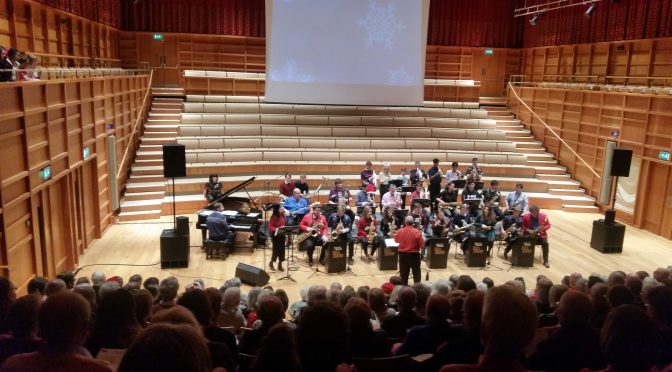 An action-packed finale to the term; a festive sprinkling of seasonal Baroque music and carols from the Flute Choir and the upper-voice chamber choir, Minerva Voices, followed by the annual roof-raising Christmas Swingalong with the University Big Band, conducted by Ian Swatman, featuring singers Elle Soo and Fleur Sumption.

Warning: there are selfies… The second in this term’s #EarBox series in Studio 3 Gallery yesterday drew an audience to hear the Flute Choir performing amidst the gallery’s latest exhibition, After the Break. The ensemble, together with cellist Faith Chan and Your Loyal Correspondent on harpsichord, presented a concert ranging from the Baroque through to an evocative arrangement of Sakura, sakura, the traditional Japanese folk-song celebrating the spring cherry-blossoms. An appreciative audience was held spell-bound as the piece unfurled in the resonant, dimly-lit gallery, winging its way amongst the paintings. Thanks to Katie McGown, gallery co-ordinator, and the School of Arts; plans are afoot for a third #EarBox event next term – watch this very particular space…

The department’s newest ensemble, the Flute Choir, brings a programme of music to Studio 3 Gallery in the Jarman Building this Wednesday, as the #EarBox collaboration continues.

Bringing together visual art and live music, the #EarBox series event this Wednesday sees the gallery hosting the ensemble, complete with harpsichord and cello, in a programme including music by Bach, Handel, Telemann, Dvorak and a traditional Japanese folk-song, all set against the backdrop of the gallery’s current exhibition, After the Break. Anyone who attended last month’s concert in the series, given by Minerva Voices, will know what a wonderfully resonant and intimate space the gallery has, perfect for bringing art and music together. The Flute Choir performed last week as part of the Magical Musical Miscellany lunchtime concert, and has been developing the programme for Wednesday throughout the term; Wednesday’s performance starts at 1.10pm, admission is free, more details here.

Children and adults alike were treated to a lunchtime concert of magical musical mayhem this afternoon, as the Music department joined in the ‘Wonderful Week of Words’ celebration of literature with the University Hogwarts Society.

The University Concert Band, Minerva Voices, Flute Choir and third-year flautist Anne Engels came together to the delight of an audience comprised of visiting school-children, here for the literary festival, staff, students and visitors to music including a medley of music from Harry Potter, Double Trouble, and selections from the Goblet of Fire.

Terrific fun, thanks to everyone involved; wingardium leviosa!

I first started flute back in primary school, where if you wanted music lessons in school, flute was the only option. I gave it a shot and have never looked back since! After a while my teacher introduced me to the West Sussex Youth Orchestra in which I moved up through the various bands and orchestras throughout my years there. Although this seemed daunting at first, it was here that I became hooked on the buzz of ensemble playing. As well as discovering loads of new music, I started playing piccolo there. I later moved to Hurstpierpoint College where I had the opportunity to join a whole host of new ensembles. This included choirs as I had now started singing, however the Jazz band was my new favourite because I had started working on some jazz repertoire with my new teacher. Improvisation was especially enjoyable for me – In my lessons I would try to get away with as much as he would resist before he would give in to join me in a jam session until the lesson was up! I also gained a keen interest in chamber music on the singing side and would later get to sing with the choir in residence at the national pilgrimage in Walsingham. Other personal highlights include performing Vivaldi’s La Tempesta Di Mare Concerto accompanied by a full orchestra – a memorable experience! During my A-levels at Hurst I took Music Technology which allowed me to dabble in writing and recording my own music. The technological aspect of this was particularly interesting to me as a computer scientist and is an industry I still follow closely.

Now at Kent, I am very glad to be able to not only continue with music and developing my skills but also meet likeminded people with whom I share a common passion. I currently participate in the Concert Band, Flute Choir, Chorus and Cecilian Choir. The performances these ensembles have been in so far were thoroughly enjoyable and I am really looking forward to those yet to come, in particular the upcoming cathedral concert.

With the festive season lurking just around the corner, rehearsals are really beginning to pick up pace here in Colyer-Fergusson.

Last night, the Big Band were in festive form as they cracked open seasonal swing arrangements for their already-sold-out Christmas Swing-along next month. Earlier in the week, Minerva Voices were getting into performance mode as they wielded Carols for Choirs, preparing to sing at the University Carol Service in Canterbury Cathedral in mid-December.

And yesterday afternoon, the hall rang to the sound of buoyant choruses from Handel’s Messiah as the String Sinfonia and Cecilian Choir came together ahead of their ‘A Baroque Christmas’ concert on 4 December. Even the Flute Choir was getting into the seasonal spirit earlier in the day, with some sparkling carols for the Watch This Space event on the foyer-stage at the end of term. With Chorus and Orchestra also learning Vaughan Williams’ The First Nowell, t is very nearly the season to be jolly…