I first started flute back in primary school, where if you wanted music lessons in school, flute was the only option. I gave it a shot and have never looked back since! After a while my teacher introduced me to the West Sussex Youth Orchestra in which I moved up through the various bands and orchestras throughout my years there. Although this seemed daunting at first, it was here that I became hooked on the buzz of ensemble playing. As well as discovering loads of new music, I started playing piccolo there. 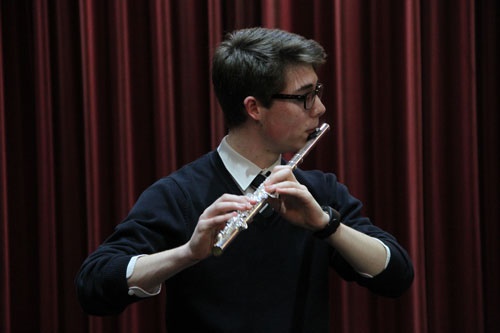 I later moved to Hurstpierpoint College where I had the opportunity to join a whole host of new ensembles. This included choirs as I had now started singing, however the Jazz band was my new favourite because I had started working on some jazz repertoire with my new teacher. Improvisation was especially enjoyable for me – In my lessons I would try to get away with as much as he would resist before he would give in to join me in a jam session until the lesson was up! I also gained a keen interest in chamber music on the singing side and would later get to sing with the choir in residence at the national pilgrimage in Walsingham. Other personal highlights include performing Vivaldi’s La Tempesta Di Mare Concerto accompanied by a full orchestra – a memorable experience! During my A-levels at Hurst I took Music Technology which allowed me to dabble in writing and recording my own music. The technological aspect of this was particularly interesting to me as a computer scientist and is an industry I still follow closely.

Now at Kent, I am very glad to be able to not only continue with music and developing my skills but also meet likeminded people with whom I share a common passion. I currently participate in the Concert Band, Flute Choir, Chorus and Cecilian Choir. The performances these ensembles have been in so far were thoroughly enjoyable and I am really looking forward to those yet to come, in particular the upcoming cathedral concert.