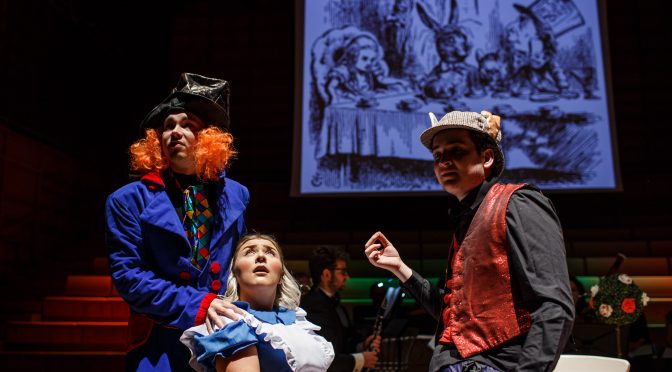 To keep you entertained during lockdown, why not join us for a screening on YouTube Live of a musical adaptation of Lewis Carroll’s classic tale following the adventures of Alice and a cast of wonderful characters ?! This live performance, recreating a musical adaptation first written for the Victorian stage in 1886, was filmed in Colyer-Fergusson Hall back in February,  given by the University Cecilian Choir, soloists and instrumental ensemble; students and staff from across the University community bringing Carroll’s much-loved tale to life for the first time since 1927. Carroll himself was closely involved in the original adaptation, writing verses especially for the production. The film will be premiered on the University’s  YouTube Live channel on Friday 22 May at 7pm, and also broadcast at the same time on KMTV. To whet your appetites, here’s the Mock Turtle’s aria, Beautiful Soup, in rehearsal, sung by Matt Cooke accompanied by a quartet of instruments arranged especially for the performance by Dan Harding.

Including an imperious Queen of Hearts, a dancing deck of cards and a mischievous Cheshire Cat, in a musical world filled with Victorian charm, step into the forest with us as we present the film of the performance on the University of Kent’s YouTube channel Live at 7pm on Friday 22 May. Gather your family, friends, housemates, and take a trip into Alice’s world in an adventure for all ages.

Find out more about the production here:

Images from the production (c) University of Kent / Matt Wilson