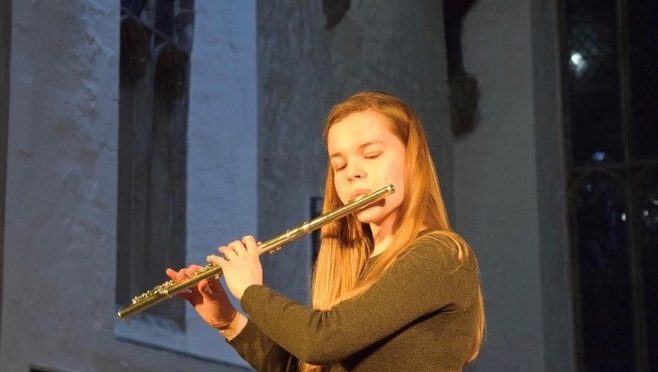 I actually had a bit of a late start to my musical journey, and that’s not even talking about the flute! I moved around a lot as a kid, constantly meeting new people and relocating to new houses so it wasn’t until I really settled somewhere, that I decided to give music a shot. I first learnt to play the piano aged 8 in Ottawa, Canada but after moving back to England, I struggled to find my enjoyment in the piano again and after 2 years I decided to quit. Despite this, I have now actually got back into playing the piano for fun and enjoy just messing around and learning pieces.

Luckily, I am not the only musical person in my family, my mum also plays the flute and piano and sings in our local Military Wives’ choir. Due to this, I decided aged 11 I would start the flute and had my first lesson at the end of year six. My most vivid memory of my first lesson was how out of breath I was, going back into my classroom proudly showing off my flute case to my classmates as it was that shiny new toy. (well actually the flute was about 30 years old!) I’d had a really thorough musical education in all my primary schools, playing in the school orchestra and singing in the choir but it wasn’t until I reached secondary school that I really started understanding the joys of music. In year 7, I joined my school’s orchestra and junior choir, (Hinchingbrooke School in Huntingdonshire) but despite this, it wasn’t really until the beginning of year 9 in which I picked music as an ‘option’ – a bit like a precursor to GCSEs- that music started to make sense for me. During this period, I was continually playing in the school orchestra, but also started taking part in the pit band for the school’s musicals, playing both flute and piccolo, and the most intense by far was Sweeney Todd! I also continued to sing in the senior and community choir in my final few years at Hinchingbrooke. Throughout secondary school and Sixth Form, I had the opportunities to lead the flute choir, as well as take part in the biennial Christmas concert performance of Raymond Briggs’ The Snowman, originally playing second flute, then moving to first flute in year 11; a huge achievement for me. What also helped was joining our local music school (HUMS, pictured above) in which I was taught for a period of time and also played in a concert band there as well as in the recorder group with my mum. We both love the recorder, and currently own a wide range of sizes from descant to bass! At the end of year 10, I had the wonderful experience to travel to Marburg, Germany with one of orchestras HUMS. We travelled there to take part in a music festival, and joined other groups from Bulgaria, Slovakia, Austria and Germany. We went for four days, leaving at 2am and driving all the way to Marburg, to then perform in the evening! We played in concerts every day, alongside being able to view the brilliant other dancers and performers, and the lovely market town of Marburg. It was a really great experience and allowed me to really get an understanding of different music styles I studied music at GCSE and A-Level, in which I found my love for analysis of music and writing chorales, as I loved the rules and logic behind them. A-Level was interesting for me as I was the only person in my class for two whole years(!), but despite this, I had a wonderful time, visiting the Birmingham Conservatoire and taking part in annual workshops with lecturers there, as well as viewing the rehearsals for Stravinsky’s Rite of Spring (one of my favourite pieces!). I was also lucky to be involved with much more performing in Sixth Form, partly due to my wonderful music teacher’s great encouragement (Thanks Mrs Cooke!). In my final year, I was lucky enough to play in my school’s “Rising Stars” concert as well as Sixth Form Celebration Evening which were both overall a wonderful way to end my 7 years at Hinchingbrooke. Since joining the university of Kent as a German and English Language and Linguistics student (it’s a mouthful I know!) I’ve thrown myself into the musical options available. I chose Kent especially for its wonderful music facilities and was a huge deciding factor when picking my top choice. I currently take part in the Concert Band and Orchestra and am a holder of the Music Performance Scholarship. Surprisingly, I’m not actually an incredibly confident performer, but since receiving the Music Performance Scholarship, it’s given me a chance to play in much larger ensembles, which is something I never had the opportunity for before, as most ensembles I played in had around 20 or less members, and I’ve seen how this has helped my confidence! So far, I have taken part in one concert with the Orchestra (pictured), which was such a fantastic experience, as I’ve never performed something of that scale before. I’m incredibly excited for the Canterbury Cathedral concert in March, as well as the Summer Music Week later on in the year.