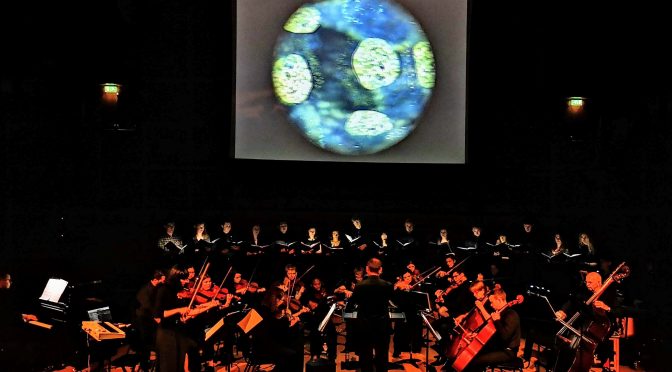 Congratulations to all the performers involved in the mesmerising first performance of Between Worlds by composer / violinist Anna Phoebe, which took an entranced audience on a meditative odyssey on the penultimate day of Summer Music Week. Drawing on research media from the School of Biosciences, Anna’s piece explores the intangible boundary between science and art in a collaborative piece for choir, strings, percussion, soloists and film-projections by artist Skyla Bridges. Conducted by Deputy Director of Music, Dan Harding, the University Chamber Choir and String Sinfonia, together with Anna herself on violin, pianist Jacob Downs, second-year postrgraduate Leon on percussion, and oboist Dan Lloyd (also Deputy Head of the School of Biosciences) unfurled Anna’s evocative piece against a tapestry of ambient electronic soundtracks and beneath Skyla Bridges’ wonderfully beautiful projections taken from research imagery by Dr Chris Toseland. The first half of the concert saw a conducter-less (for the most part) String Sinfonia in music by Britten, Reger, Purcell and Arvo Pärt’s lachrymaic Cantus in memoriam Benjamin Britten, for which the strings were joined by conductor, Susan Wanless. Pärt’s haunting tribute to Britten closed the first half an set the atmosphere for the second. Afterwards, performers, audience and guests mingled for a post-concert reception to celebrate the fruition of a project that has been in rehearsal since January. Read the programme from the event yourself here.