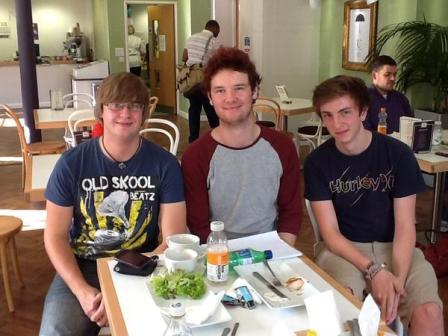 This year’s new trio at the helm of the Medway Music Society are feeling very pleased with themselves already; meeting them in the third week of the new academic year, membership is already up on last year’s total.

The man in charge this year is Jack McDonnell, who assumes the Presidency after being Vice-President last year. Vice-President for 2012-13 is Garrick Wareham, and Treasurer is Joe Tinker.

The trio have once again set the musical life of the Medway campus rolling in continuing their highly successful Tuesday night Band Night and Rockaoke sessions, both of which were instigated last year and continue to attract crowds to Coopers on Tuesday nights. They’ve also set up special deals for Medway’s burgeoning Music Society members with music stores in town, and are hinting at some exciting new projects in collaboration with other societies at the campus that could lead to some large-scale projects in the year ahead.

“We were all over Freshers’ Week,” declares Jack decisively over lunch at the No.1 Cafe, “but there’s still more we can do. With the new BMus course that’s started here at Medway, there’s a bunch of new students we can get involved in the Society. We’ve already got more paid-up members than we had last year; and we want to get them all into Coopers!”

Garrick, meanwhile, is busy co-ordinating the return of the Medway Big Band which, he says enthusiastically, “we’re re-christening the Medway Jazz-Funk Band, which is the new direction we want to go.”

This year, Rockaoke starts next Tuesday from 8pm in Coopers; there’s also the launch of the Universities at Medway String Group, Big Band and Chamber Choir this term. The Society is now taking signups for Battle of the Bands which starts next month, and there’s even a Pub Golf social coming up! Get in touch with them via e-mail.

The Society has an active Facebook page and lively presence on Twitter, and looks set to continue developing the musical life at Medway. Keep an eye out; there’s plenty of exciting times ahead…