As the Devil danced away over the hill with Joseph the Soldier in tow at the end of Stravinsky’s The Soldier’s Tale on Friday night, our new resident ensemble, CantiaQuorum, danced into being at the end of its inaugural concert, 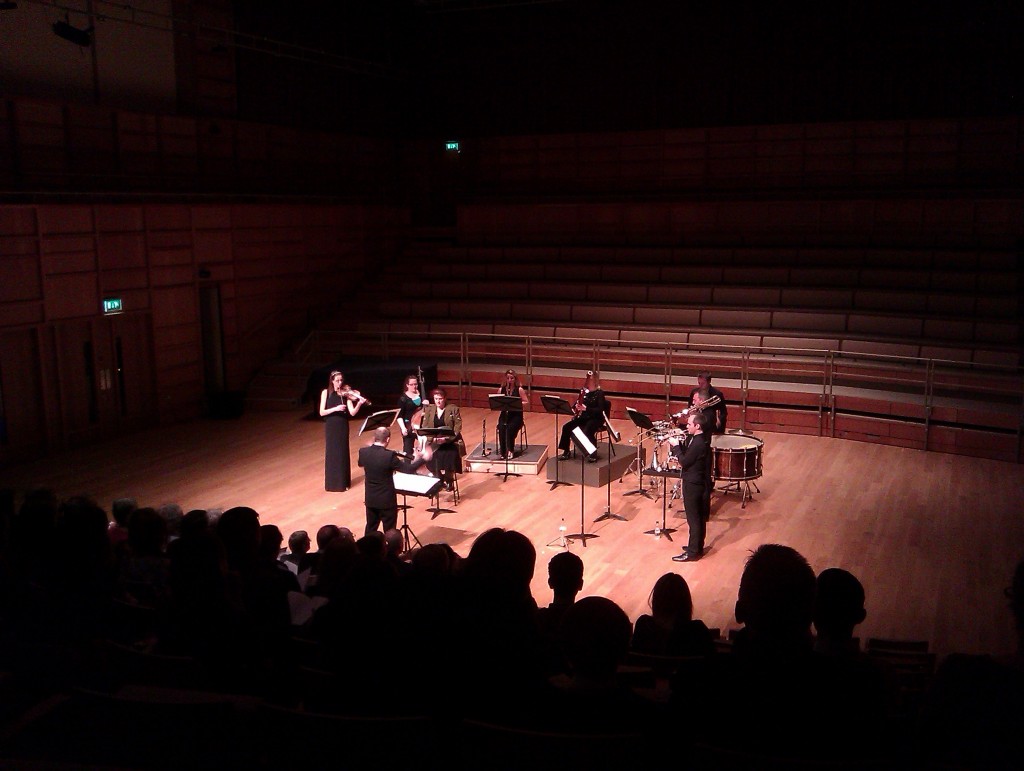 Formed from top-flight professional musicians based in Kent but often to be seen free-lancing with several London orchestras, Friday night’s concert combined Stravinsky’s morality play with a second half of Walton’s Facade, complete with guest narrators. Posy Walton grinned and guiled as the oily, preening Devil, as well as giving robust earthiness to Joseph in the Stravinsky, and clearly relished switching between characters.

The ensemble returns in February, this time with a programme of Baroque music.

Thanks to Matt Wilson for the photographs from the afternoon rehearsal.

This year, we are very excited to be launching our ensemble-in-residence, the exotically-named CantiaQuorum under the auspices of trumpeter and musician extraordinaire, Alex Caldon. With two concerts looming as part of the launch, I forced the frenetically-busy Alex into a small corner of the Gulbenkian Cafe at the sharp end of a croissant, and asked him about what’s in store…

Tell me about the name!
CantiaQuorum – The ensemble has its roots in Canterbury. I was keen that the tag for our ensemble should reflect the gravitas inspired by the city’s immense historical importance. From the late 2nd Century, Durovernum Cantiacorum was the civitas capital of Kent. The Roman settlement developed around AD43. A twist on the original Roman name for the city brought me to CantiaQuorum.

What’s the idea behind setting up the ensemble?
I have lived in East Kent for 10 years and worked as a professional musician in London throughout. As much as I love the commute (!?) and London (in some ways) I was desperate to show the denizens of Canterbury that, well, most of the wonderful musicians they travel to see in London orchestras, actually live in Kent! I am very proud to say that we have the very best of the capital’s musicians in our Canterbury ensemble. All of our members are orchestral players and soloists of the highest order. But not at the Proms, playing Rule Britannia, or on Saturday night telly backing Strictly hopefuls, but here, in the astonishing concert-hall right next door playing fantastic and fun programmes of great music. And they are yours to get to know and enjoy!

What makes this ensemble distinctive?
CQ has a unique make-up. They are all my friends. That’s essentially it. But, luckily for you I’m terribly choosey. And very lucky.

You’re launching your residency with Walton and Stravinsky, which looks exciting! Why that programme?
When I was 16, and at the Junior department of the Royal Academy of Music, a few friends and I decided to put on a concert! Facade with Posy Walton in fact. This concert, a sell-out at Lauderdale House in Highgate, London was formative in my outlook as a musician. We had a ball basically!..and lots of rehearsals. It’s a seriously tough piece! We were so intent on nailing Facade that it was literally an hour before the concert that we realised we needed another piece for the programme. Dan Bates, another friend of ours was doing a short programme of oboe pieces in the first half but there was definitely something lacking. Backstage with little time to discuss we decided to play an improvised work for the Facade ensemble. Infant became a 3-movement improvised work. We did it. And Facade was greatly appreciated!
As for the Stravinsky. I was lucky enough to play the Soldier’s Tale in a unique production at the Old Vic in 2006. The production was a joint effort between the Old Vic and the National Theatre of Bagdad!? And the text of the piece was presented in both Farsi and English. Hence, lots of rehearsal. And that before the director had decided that the musicians should play the entire work from memory! Totally incredibly. The conductor, Robin O’Neill, was thankfully fantastic, and extremely patient throughout.
It’s a wonderful piece, and I feel extremely qualified to say that. So do come along and be blown away by one of the great composers of all time.

CantiaQuorum bursts into life with a free lunchtime concert on Wednesday 5 November at 1.10pm, with the formal evening concert launching the ensemble on Friday 14 November; more details about both events here.