Our season of exhibitions in the Colyer-Fergusson Gallery continues with a series of photographs by Matt Wilson. 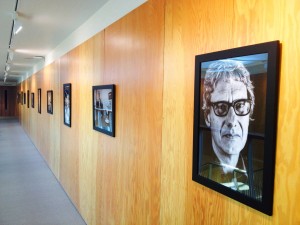 Anyone who has seen our publicity and event photos will already be familiar with Matt’s work, and we’re delighted to be able to give Matt the opportunity to exhibit some of his more focused portraiture. The new exhibition, part of the University’s anniversary celebrations over the course of this year, is a selection of portraits of members of its staff. In Matt’s own words: 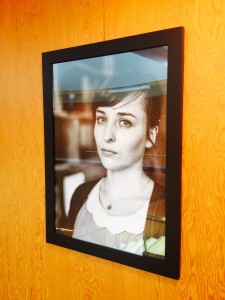 Since 1965, the University of Kent has employed thousands of people. These are just thirteen.

Admission is free; gallery open during normal opening hours, and the exhibition is on display until the end of October.

Currently touring the UK after a successful premiere at the Cheltenham Festival last year and its recent London premiere at Milton Court Theatre, we are very pleased to be bringing the chamber opera, Tokaido Road: a journey after Hiroshige, to Kent on Saturday 23 May.

The chamber opera, an evocative fusion of music, poetry, art, mime and photography comes to the University in a few weeks as part of the University’s fiftieth anniversary celebrating the work of members of the University community; the libretto is written by Nancy Gaffield, Senior Lecturer in Creative Writing in the School of English, and is based on her own award-winning cycle of poems of the same name. Commissioned by frontier-challenging Okeanos Ensemble, and composed by Nicola LeFanu, the work is inspired by Hiroshige’s 53 Stations of the Tokaido Road, a series of woodblock prints evoking the Japanese landscape and its people along the ancient route linking Edo and Kyoto. The chamber opera sees Hiroshige reflecting on life, love and loss on his journey along the Tokaido Road, unfolding against a backdrop of projected images of both Hiroshige prints as well as photos of modern-day Tokyo. 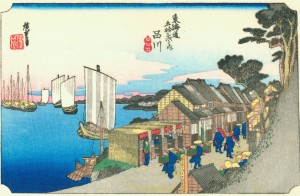 The score combines Western instruments with Japanese sho and koto, and the first half of the performance sees members of Okeanos perform traditional Japanese music.

Come along The Road when it arrives at the Gulbenkian Theatre on Saturday 23 May; details and tickets here. You can find out more about the chamber opera, including image galleries and audio extracts, here.

The annual Music Prizes were awarded last week to a selection of students who have made an outstanding contribution to the musical life of the University this year; and what a year it has been!

The Canterbury Festival Music Prize, awarded to a final-year student who has made an outstanding contribution to music was awarded to Marina Ivanova, in her final year reading Economics. Since coming to Kent as a Music Scholar, Marina has participated in Chorus, Chamber Choir, Cecilian Choir, Lost Consort, as well as being a soloist in the Colyer-Fergusson Cathedral Concert, Vivaldi Gloria; she also  took part in the Dame Anne Evans masterclass in the autumn, and many other recitals. The prize was presented by the Director of the Canterbury Festival, Rosie Turner.

The Colyer-Fergusson Music Prize, which is awarded each year to a student who has made a major contribution to organising music at the University, was presented to Alex Turner, a second-year student reading Biomedical Science. The prize recognises her exceptional all-round behind-the-scenes organising and admin skills as Concert Band/Big Band assistant (and flautist, and sax player), and in other music activities including the Symphony Orchestra (flute and piccolo), Dance Orchestra,  the flute ensemble, as well as playing in the pit-band for this year’s Musical Theatre Society’s production of Hair. Alex received her prize from Jonathan Monckton, Chair of the Colyer-Fergusson Charitable Trust.

The John Craven Music Prize, which goes to a returning student who has made a major contribution to music at Kent, this year went to Gordon Wood, in his second year reading Philosophy. A Music Scholar, Gordon plays double bass in Symphony Orchestra, Camerata, String Sinfonia, Dance Orchestra, tuba in Concert Band, Double bass/bass guitar in Big Band, and at various Watch This Space and jazz gigs. John Craven himself was there in person to make the presentation.

The University Music Awards Committee Prize, for a student who has made a special contribution to music, was awarded jointly to two final-years students;  Matthew Bamford, reading International Business, and Carina Evans, reading Accounting and Finance. Matthew’s award was for his all-round contribution to music-making this year. Student conductor of Chamber Choir, MD for Musical Theatre Society’s production of Hair, sings in Chorus, Chamber Choir, Cecilian Choir and Treasurer of the Music Society.

Carina’s prize recognises her contribution, as a University Music Scholar, to music over three years as timpanist and percussionist with the Symphony Orchestra, Concert Band, Camerata and many recitals on marimba. Both students received their award from committee-member, Dr Dan Lloyd.

Finally, the First-Year Prize, awarded if appropriate to a student who has made a significant contribution to music-making during their first year of study, went to Joe Prescott. Reading English Language and Linguistics, Joe has made a significant impact on music as a University Music Scholar since arriving in September, playing jazz trumpet in Big Band and Dance Orchestra, Trumpet in Symphony Orchestra, Concert Band, as well as singing tenor in Chorus, Chamber Choir, Cecilian Choir.

The musical life of the University is nothing without the commitment, enthusiasm and participation of its student community – our thanks and congratulations to all the prize winners for their outstanding involvement in, and contributions to, what has been a memorable year. Here’s looking forward to the next!