A special event next week brings together an exhibition in Colyer-Fergusson Gallery with live music for two pianos on Friday 2 December. Preludes (where you go I go) by artist Adam de Ville returns to the gallery to see out the Autumn term in a new form, and to mark its re-emergence, you are invited to view the images accompanied by a live performance of Gavin Bryars’ My First Homage, for two pianos, performed by Dan Harding and Matthew King.

The exhibition, created especially for the Colyer-Fergusson Gallery, is Adam’s response to Bryars’ piece, Sinking of the Titanic, and this event offers the opportunity to experience the images during a live performance of Bryars’ equally meditative homage to jazz pianist, Bill Evans, as a live soundscape. Adam will also be present at the event, and will be available for a ‘Meet the Artist’ session afterwards.

The exhibition will be open throughout December; the viewing together with the live performance begins at 1.10pm and will last twenty minutes; admission is free, details online here.

We’re delighted to announce that the latest exhibition in Colyer-Fergusson Gallery is now open!

Created especially for the Colyer-Fergusson Gallery, Preludes (where you go, I go) by visual artist Adam de Ville is a series of images in response to Sinking of the Titanic by composer Gavin Bryars, a haunting meditation on the idea of what happens to the music played by the band as the great ship sank.

Adam’s exhibition imagines the same effect happening to paint and paper in a sequence of images capturing particular moments before, during and after the event. Based on accounts, personal stories and surviving artefacts, the series is a moving contemplation of the human side to one of history’s great tragedies. The exhibition is showing in Colyer-Fergusson Gallery until Friday 4 November during normal opening hours, and admission is free. Find out more about Adam here. 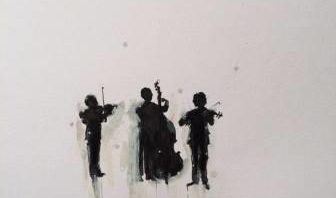