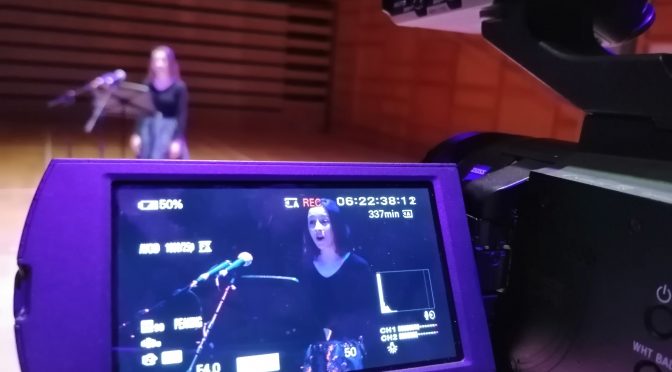 My name is Carmen Mackey and I primarily sing here at the University of Kent along with a bit of bass guitar on the side. At this point, I suppose it would make sense if I said I had a musical family who raised me surrounded by music and that I’m called Carmen after the opera. This is not the case – my parents (who are not very musical) simply liked the name!

I’ve always enjoyed performing so from a young age I attended extra-curricular stage schools. In year 7 I started classical singing lessons and since then have completed grades 2-8 in singing. I was incredibly lucky with my high school, St. Philomena’s Catholic High School For Girls and the musical opportunities it presented. With the school’s chapel choir each year we toured a different city in Europe, singing in Paris, Barcelona, Berlin, Liege and Porto. Some stand out moments from this was performing the ‘Laudamus Te’ duet from Vivaldi’s Gloria in Porto Cathedral and singing the ‘Libera Me’ from Faure’s Requiem in the Kaiser Wilhelm Church Berlin. In school, I also took part in the yearly musical and got the chance to play Fagin from Oliver, The Scarecrow from The Wizard of Oz, Rooster from Annie and Nicely-Nicely Johnson from Guys and Dolls. At this stage, I will remind you that it was an all-girls school and because I can sing quite low the male roles were bestowed upon me. For my singing teacher’s opera studies degree, she wrote an opera version of the Room on the Broom book by Julia Donaldson in which I played the cat which was great fun. From year 10 – 13 I compered my school’s termly concerts at which I was grateful for the opportunity to host as well as perform. As Head Girl of my school, I set up and directed the Musical Theatre Club which I ran for 2 years. Just recently I went back to my school to see this year’s production of Sister Act at which I felt like a proud mum watching my proteges. In Year 11 my singing teacher asked me if I would join her church choir as they were down an alto, and it was there, at St. Mary’s Church Choir Beddington, that I was really challenged and pushed as I was suddenly in a group of about 8-12 adults a mass in SATB who just picked up music and sang it, only rehearsing for about an hour before. It was here that my sight reading, blending and working within an ensemble vastly improved.

I started learning the bass guitar when I was 16 and have been involved in a jazz band in school and participated in band workshops at the Roundhouse in Camden. Last year I got a Merit in grade 4 Bass, so although it’s still relatively new compared to some other people who have been playing various instruments since they were 6, I really enjoy playing and it has been a useful challenge learning bass clef!

Since starting out at Kent, I have joined the University Chorus, Cecilian Choir, Chamber Choir, the Lost Consort singing plainsong, the Musical Theatre Society and just recently General Harding’s Tomfoolery. I’ve always enjoyed music as a subject in school, studying it at GCSE and A-level; part of the reason for choosing the University of Kent is the incredible extra-curricular department it offers that  I am thrilled to be a part of.

You can watch a short clip of Carmen singing with the Chamber Choir live on BBC Radio 4’s Today programme, when it was broadcast from the Gulbenkian, in December here.