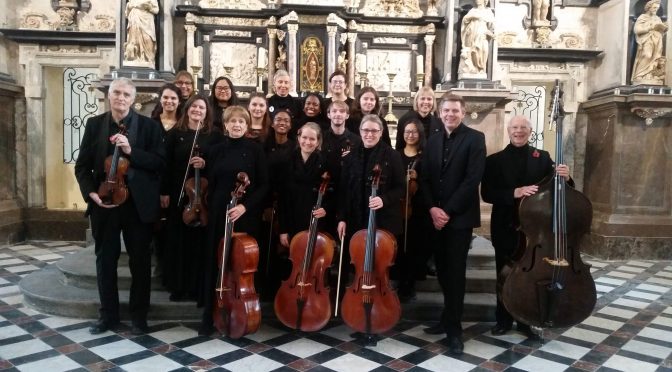 Preparations are underway here at Colyer Towers for a special event next week, when the University Camerata will cross la Manche to give a concert at the l’Eglise de Notre-Dame in the city of Calais.

Featured in next month’s local magazine, Les Rêves de Notre-Dame, the event is first of several events throughout the current academic year which celebrates Canterbury’s historic links with the city; the string ensemble, comprising students, staff and alumni, will cross the Channel armed with a programme of music by Purcell, Warlock and Elgar, as well as  Marcello’s Oboe Concerto featuring the Deputy Head of the School of Biosciences, Dan Lloyd. The Camerata last sailed in to port back in March for a performance of Prokofiev’s Peter and the Wolf; we’re looking forward to presenting a largely English musical feast for the burghers of Calais at the end of next week, on Sunday 10 November; should you happen to be in the city at 3pm, the event is free, join University musicians as we celebrate our historic links with the French city-port – event details online here. 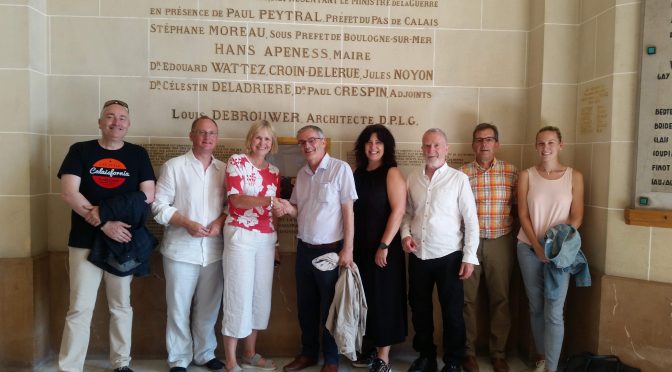 During last week’s heatwave, the Music department found itself walking the streets of Calais, exploring various cultural venues throughout the city as part of a planned collaborative partnership in the forthcoming academic year.

From its humble beginning as a fishermen’s village, recorded as early as the eighth century, Calais rose to become the Gateway to France. The cities of Calais and Canterbury are united by the former’s history as a trading-port with England, with Calais having been a part of the diocese of Canterbury following the seizure of the throne of France by Edward III in 1347. The damage suffered by Calais during the Second World War laid the way for major rebuilding projects, leading to the creation of several striking venues and a city endowed with exciting creative spaces. The shared history between Kent and Calais is something which the Music department and the Calais city council will be looking to explore and celebrate.

Following an approach earlier this year from the city council about a shared endeavour, we found ourselves boarding the Eurotunnel early on Wednesday morning, travelling to meet the representatives from Calais at the historic L’Église Notre-Dame de Calais, the first stop on our tour of the plethora of cultural venues threaded throughout the city.

After the city was retaken by the French from the English in 1558,  L’Église Notre-Dame became its most important church. A majestic altar-piece of marble and alabaster presides over a large church currently undergoing restoration, which began in 2009 and which are bringing the vanished magnificence to life once more. Once a year, the church is filled with over 4,000 candles for the Festival of Light, which attracts visitors from all over France. Our next stop was La Halle, a flexible space on the Place d’Armes which can open its striking concertina-door, which occupies one entire side of the covered hall,  onto the plaza. The space hosts outdoor and indoor performances as well as festivals throughout the year.

Next on our cultural odyssey was the Museum of Lace and Fashion, housed inside an original lace factory from the nineteenth century, with vast echoing galleries and an auditorium. The Forum Gambetta is a bright, modern venue that would be ideal for a bustling big band set; its jazz atmosphere has seen its stage graced by legendary French jazz violinist Didier Lockwood. The next venue was, fittingly, L’Ecole Nationale de Musique de Calais, of which Lockwood is a former student commemorated in the Studio Didier Lockwood. Our steps then led us to the Musee des Beaux-Arts, which houses artwork from the sixteenth century to the present day. The tour came to a magnificent conclusion at the city’s town hall, built in 1885 but harking back to the sixteenth century. The gardens adorning the museum’s grounds include one of the fourteen bronze casts throughout the world of Rodin’s The Burghers of Calais from 1889, and commissioned to commemorate the six residents who were prepared to sacrifice themselves to save the city during the Hundred Years War. The town hall itself includes beautiful rooms, a wonderful Grand Salon just crying out for a string orchestra to perform the music of Lully, imperious marbled corridors, and a belfry 75 metres high which affords panoramic views across the city; across the Channel, we could see the cliffs of Dover looking towards the bustling port. With such rich history rubbing shoulders with modern venues, artistic exhibitions, festivals and all within walking distance of each other, Calais offers fertile ground for some exciting artistic collaborations – we’re looking forward to building and developing ideas in the new academic year. Mille remerciements to Philippe and the team from Calais City Council for making us so welcome, and for sharing the city’s vibrant artistic possibilities with us – we are looking forward to taking the first steps in a musical entente cordiale celebrating both sides of La Manche!