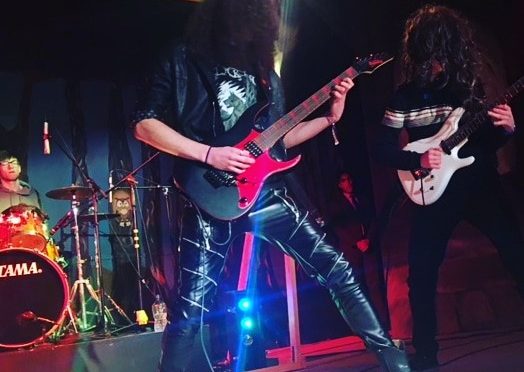 I began playing acoustic guitar around the age of 6; I started with group lessons but quickly progressed to individual lessons. I started to perform in my primary school concerts, both in guitar groups and as a soloist. At age 8, I also took up piano lessons, while my guitar lessons became more focussed on classical guitar. At age 12, I joined Maidstone Youth Music Society (MYMS) where I learned to play orchestral percussion.

During secondary school, I joined a club called ‘Acorn Band’ where I played keyboard. I also performed a short piano piece in year 7 as part of an inter-house music contest in front of the whole school. In year 8 I took up electric guitar and my liking for rock music grew dramatically. Although it was not until around year 9 that I started intense practice. This was largely due to my introduction to virtuoso guitar players such as Steve Vai and Yngwie Malmsteen, who would often take inspiration from classical music to combine with rock and produce complex music.

During these years I became a part of a Kent Music project called ‘Orchestra One’ which brought a variety of musicians of different abilities together to compose and perform music. The music was usually based around a theme like ‘space’; needless to say, it wasn’t uncommon for this music to be somewhat abstract and complex due to the different interpretations. My first performance with ‘Orchestra One’ was at the Hazlitt Theatre where I played a lead role amongst the other musicians, and had an extended guitar solo within one of the pieces we composed. Throughout the rest of my ‘Orchestra One’ performances, I retained my role as a soloist and we even performed once at a musical showcase held in the Gulbenkian. Another Kent Music project I was involved in was called ‘Rockshop’. Again, I played a lead role with regular solos, but this time the group was much smaller and represented a rock band. In terms of solo performances, I became heavily involved in school concerts and would often play very challenging pieces. One time for a Christmas concert I arranged a few Christmas songs into an instrumental guitar version. Outside of school, I also played a solo piece at the Herne Hill Music Festival.

In year 11, my band and I performed Creeping Death by Metallica as part of the school show. I will always remember half the band wearing wigs (to match my own curly locks), as well as my guitar solo, that I played with my teeth. The following year we played The Trooper by Iron Maiden, for which we received thunderous applause. During my last few years at secondary school, I also played lead guitar in three school musicals. The first of these was Schools Will Rock You where I ended up standing precariously on top of two amps during my guitar solos. The other two were Little Shop of Horrors and Oliver, where my role of guitar player was often expanded to include xylophone and tambourine (as I was also an orchestral percussionist).

At the end of my 7 years at MYMS playing percussion, I had progressed to the flagship orchestra and won the MYMS musician of the year award with the rest of the senior percussionists. Much to my delight, MYMS decided to hold a concert where members could showcase their abilities on other instruments, so naturally, I was able to show off my guitar playing to a crowd that hadn’t before witnessed it. As I am studying Music Technology at the University of Kent, I have been able to make good use of my playing in my course, as well as being able to see it from a different perspective. I have become a regular at Music Society events, held every Tuesday at the Deep End in Medway. I usually play guitar in a cover band called ‘Pod 3’, although I have also been known to fill in for bass and even electric ukulele. I sometimes play solo performances as well. Along with this, I have joined Medway Session Band and the Guitar Ensemble, which both give me more opportunity to experience a wide range of music. I am also hoping to play guitar in the musical ‘American Idiot’, in association with the MADS drama society. I intend to make the most of all the musical opportunities available to me while I am at Kent.