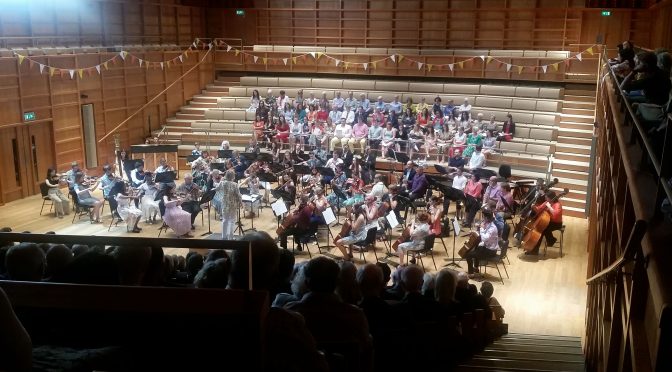 Congratulations to everyone involved in Saturday’s annual Music for a Summer’s Day Gala concert, the crowning event as part of Summer Music Week. The University Chorus, Orchestra and Chamber Choir each gave a final, valedictory appearance in seasonal, summery music, whilst the members of the Limoncellos filled the foyer before the concert with stirring film tunes and pop music arrangements. Final-year sopranos Helen Sotillo and Fleur Sumption brought a packed hall to tears with a rendition of You’ll Never Walk Alone on the final occasion of their singing with the Music department in what has proved to be a memorable year for both ladies. The incoming President of the Music Society, second-year Owen Kerry, provided some scene-stealing moments as he deftly wielded name-cards (and at one point a mobile phone for a couple of selfies…) as part of An Illustrated Guide to the History of the Symphony. And final-year flautist Robert Loveless was handed the baton to conduct the traditional encore which brought the concert to a rousing conclusion. Following the concert, audience, performers and guests spilled out into the marquee for the annual cream tea, for which the sun shone and blue skies bloomed overhead. What becomes apparent at the end of the Gala concert is what a wonderful sense of community has been built up during the academic year by everyone involved in extra-curricular music-making at the University. It’s a real tribute to how committed everyone is, and how involved they have become, to see so many of those graduating so moved by the occasion of their final appearance; parents, friends and family all coming along to support throughout the series of events often remark on how much being a part of music at Kent has meant to the students involved throughout their time. There’s a lovely feeling of camaraderie throughout the entire week, as the various ensembles gather for a final musical hurrah before the academic year ends. Our thanks to everyone who has been a part of the Music department across the year; undergraduate and post-graduate students, staff, members of the community and all the alumni who have returned at various points either to participate or to be part of the audience. To all those who are leaving this year: thanks for all your contribution – hail and farewell!