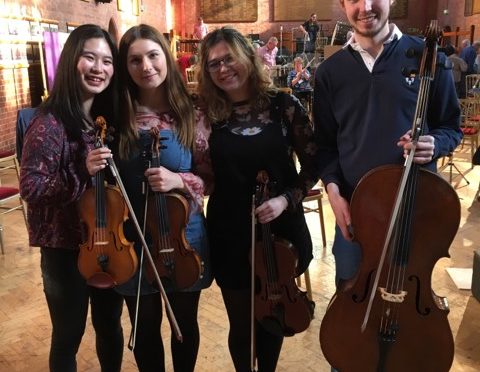 Not content with busily rehearsing and performing during term-time, final-year Music Performance Scholars and string-players Žaneta Balsevic and Molly Richetta headed off to Shropshire last week to participate in an Easter Orchestra Week run by the Easter Orchestral Society at Ellesmere College. Here, Molly reports on a week of orchestral and chamber music rehearsals, concerts and chains…

During the Easter break, Žaneta and I attended an orchestral course in Shropshire called Easter Orchestra Week. It was a week of intense and challenging music making with a huge orchestra of like-minded music lovers.

The list of music for the week was extensive; there were four main works that were rehearsed each morning, and in each afternoon and evening rehearsal we would sight-read through one or two works. The four main works were performed in an informal concert on the last afternoon. These included From the House of the Dead suite from a ballet by Janáček, which uses chains in the percussion section to represent the chains of the prisoners where the work is set. The second was Symphony No. 3 by Arvo Pärt; between the second and third movements was a thunderous cadenza for the timpani (obviously milked to its fullest extent) which took the rest of the orchestra completely by surprise on the first play through. The third work was Concerto Festivo by Andrej Panufnik. This was challenging as the meter changed every couple of bars. I was talking to the musical director at breakfast one morning and he said that the composer was fascinated by trains, and while traveling would have ideas and write them down- but had forgotten exactly the time signature of the part he had written before, hence the constant changes from ¾ to 3/8!

The final work was the famous tone poem by Strauss, Till Eulenspiegel, the story of a practical joker and possibly the most technically difficult but rewarding of the four works. All four of these I grew to love as the week went on. In the afternoons and evenings, we sight-read through many of the most famously difficult pieces in the orchestral repertoire, including the ballet Daphnis and Chloé by Ravel and Shostakovich’s Symphony 12. Most of these sessions I spent clinging on for dear life in the viola section and praying that I didn’t make my debut as a soloist in one of the rests. One of my favourite pieces of the week was Rodion Shchedrin’s Naughty Limericks; a piece full of humour. One moment of the piece required the player at the very back of the viola section to play the first violin tune in the wrong key as loudly as possible at one of the few quiet moments. The final evening before the performance brought some light relief with film music including ‘Raiders of the Lost Ark’ and ‘The Good, the Bad and the Ugly’. In these sessions we also had the opportunity to sit in different seats and sections, so I was able to play violin as well as viola through the week, and people had the chance to play concertos or sing as soloists.

The conductors and the leader of the orchestra were incredible from start to finish in the week- being able to tackle such repertoire was an experience I will not forget, and they made even the most difficult pieces enjoyable and (almost) playable!

After lunch we had free time which some people used to play through chamber music. I had the chance to tick many pieces off my bucket list; I was able to play Mendelssohn octet, a Dvorak string quintet and the Smetana quartet (which may have the best opening tune for viola of any quartet I have heard) among others! It was wonderful to be around so many like-minded people who were capable of and exited to sit down and read through pieces. The location of the course was perfect- in a school in the middle of the beautiful Shropshire countryside, which others used the free time to explore. Even though the music from the week was great, it was the people on the course which made it so much better. There was a wide range of ages and professions of people and getting a chance to speak with more experienced members of the orchestra was a real privilege. The atmosphere was so friendly; Žaneta and I went down to breakfast on the first morning and sat on a table of strangers-who all spoke to us as peers and friends. Every evening exhausted from the day of rehearsing we would head to the bar and get to know the other members over a few too many glasses of wine. I was lucky enough, as well as 5 others, to be given a scholarship. The others quickly became our close friends, and as always in the music world, we found out we had mutual friends. It was a brilliant opportunity to experience music that as an amateur musician you would not get the chance to play anywhere else. I remember sitting in the first rehearsal and feeling amazed that so many people who do not work in music were meeting together to spend a week of their life playing music purely for the enjoyment, inspiration and challenge that comes from it. I feel that my sight-reading has definitely improved as a result of playing so many challenging works, as well as the ability to convincingly pretend that I know where I am. Many of the members had been going back every year for many years, and I hope to be able to go back again next year too!